By busymockingbird on September 1, 2017

It started with an episode of Adventure time called “Ocean of Fear,” in which the main character, Finn, has to conquer his fear of the ocean, which is personified as a smoke-looking creature coming out of his bellybutton, ultimately (SPOILER!) chopping its head off with his grass sword (DANG I love Adventure Time!).

That stuck in my head (as Adventure Time themes often do)…that Fear comes from your own body, and is created by you and your experiences, and that it’s up to you to just live with it tormenting you, or to destroy it.

So one day, I had Myla pose for me (because I’m an artist and it’s awesome being able to use my family as reference) with a toy dagger she has.  I wanted to reference the episode in some way subconsciously, but I wasn’t quite sure what I wanted to do with it yet…

Hold up.  Wait.  This goes a little deeper than that…

Recently, I did an interview with Mother Maker, where I was asked about working and making a living from my art, and it occurred to me that maybe people don’t know that I DO have a full-time “day” job.  I’m a graphic artist that works for MWR in Missouri, and I can do it from a distance at home, which I am SO extremely grateful for.

I always thought that maybe it wasn’t as respectable that I wasn’t able to “make a living” full-time on my artwork alone (goodness knows I’ve tried), and sometimes I’ve felt a little bad for that.  Like I wasn’t “successful” (whatever that means).

And that’s pretty darn “successful” in my book.

So back to the doodle.

(Actually, come to think of it, I think that’s why I call them all “doodles:”  because they’re just mine, and they don’t have to be finished if I don’t want them to be.  I show them to share, but I don’t HAVE to.  They don’t ever feel “precious” or “sacred” or “untouchable.”  They’re just like special buddies you can scrap around with.

I used to HATE pencil (PTOOIE!).  But our art friend Mab Graves sent us her pencils, and I was compelled to try them out with a clean heart…and I found a new respect for graphite!  Ballpoint pen will always be my favorite, but I actually came to really appreciate pencil.  I didn’t always like the feel, but this was smoother, less gritty, and with the help of Workable Fixative, you can spray it to keep it from smearing, and then when you paint on top of the drawing, it gives it a really interesting look.

So I started by drawing Myla from one of my reference shots.  I was playing with proportion, and wanted things to sort of be out of whack a bit.

I had other plans, but as you work on something, it sort of “talks” to you, and sometimes if you listen well enough, it’ll sort of “tell” you want it wants.  So even though it wasn’t initially the plan (and let’s face it: I’m not exactly a planner when it comes to art.  I do what I want right as I do it, and RARELY do I ever draw it again to replicate somewhere else), it seemed to want buildings behind it.  Old German buildings, specifically.  I grew up in Germany as an Army Brat, and I’ve always missed the feel of cobblestone roads and buildings all smooshed together at odd angles.

And then, for some reason, I thought of Fear again.  For me, it’s never been just one big looming thing that I can pinpoint.  It’s often just little worries that gang up and annoy me, or pick at my hair.  My Fears seemed more like squirrels:  something quick and elusive.  Something interesting, flitting around your head, but something you’re not allowed to get too close to.  And they’d be sort of like a patronus, but made of smoke, never quite fully taking form before disappearing and leaving you with just that hint of nervousness and uncertainty…

(And I’m not even sure I fully understood that until I wrote it out just now.) 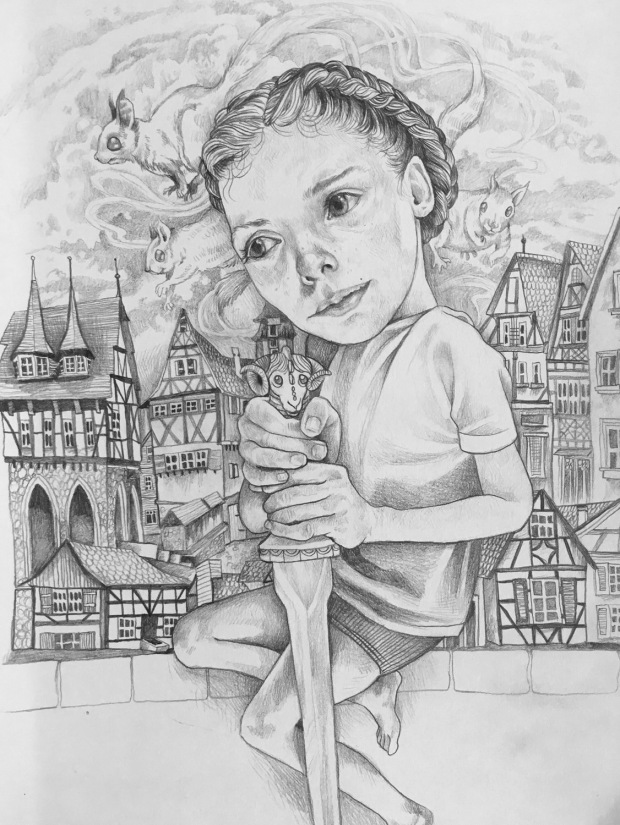 I drew the girl (Myla, but not really Myla) with a sword, ready for whatever’s next….except that I wanted her to be calm about it.  Like she sees it, but she knows she can handle it.

Next up, I tried a tonal study, where you just lay out the tones in greys, so you can work out what parts should come forward and what parts could stay back.

(On a similar topic, while I absolutely ADORE outlines, I’ve been playing with the idea that there shouldn’t be any lines–that things take shape based on lights and darks.  A light thing stands out only because the things around it are darker.  I played with that a little here, but I’m still a sucker for an outline.) 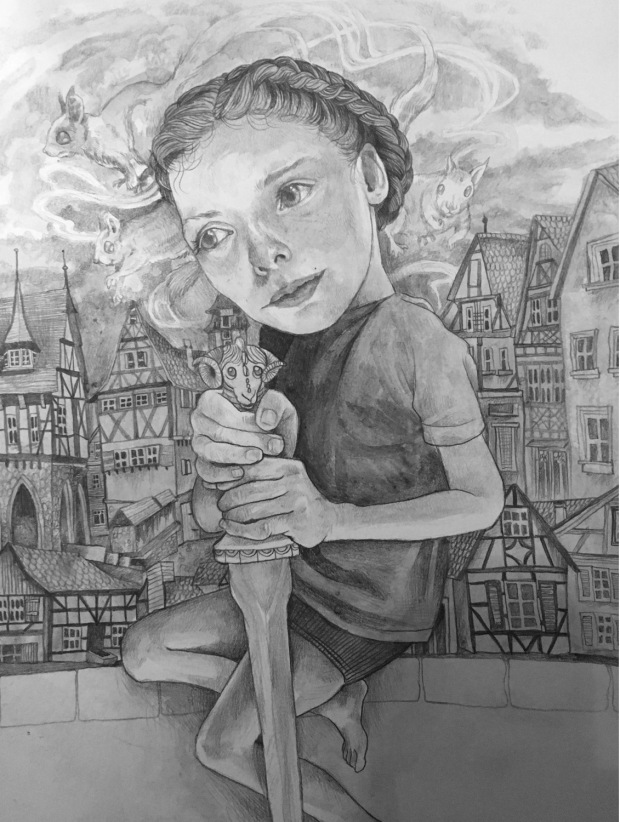 I worked in acrylics on her skin, more as an experiment.  I have been LOVING the way watercolor looks on top of graphite (after spraying on a fixative), like old etchings.  But I wanted to see what acrylics would do. 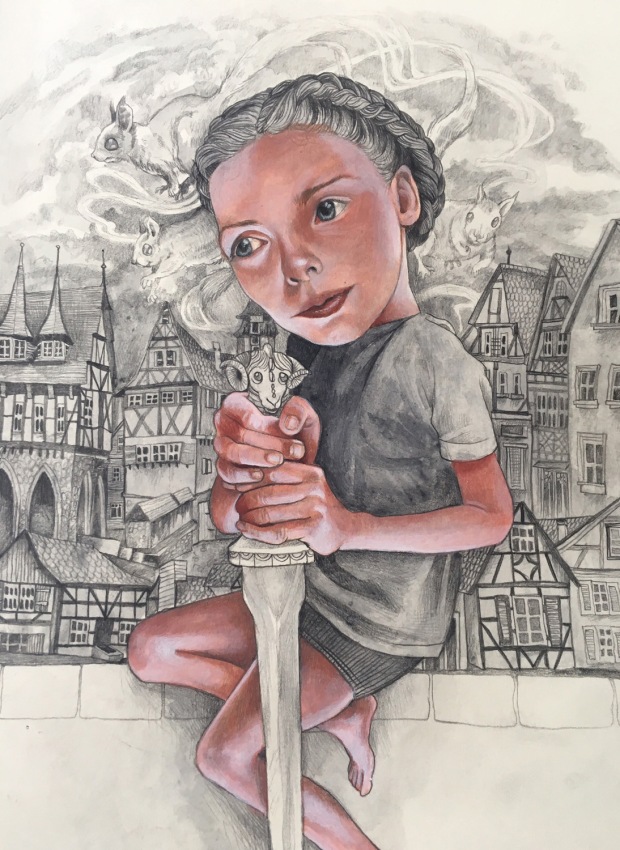 I primarily used only about three colors to fill in light washes on the buildings.  It’s a struggle, as I have a LOT of trouble finding interest in painting backgrounds, but I understand that it really does add great context to a piece.  (Maybe the buildings are a subtle self-reminder that these fear-things stem from experiences you had in childhood, since mine was primarily spent in Germany…) 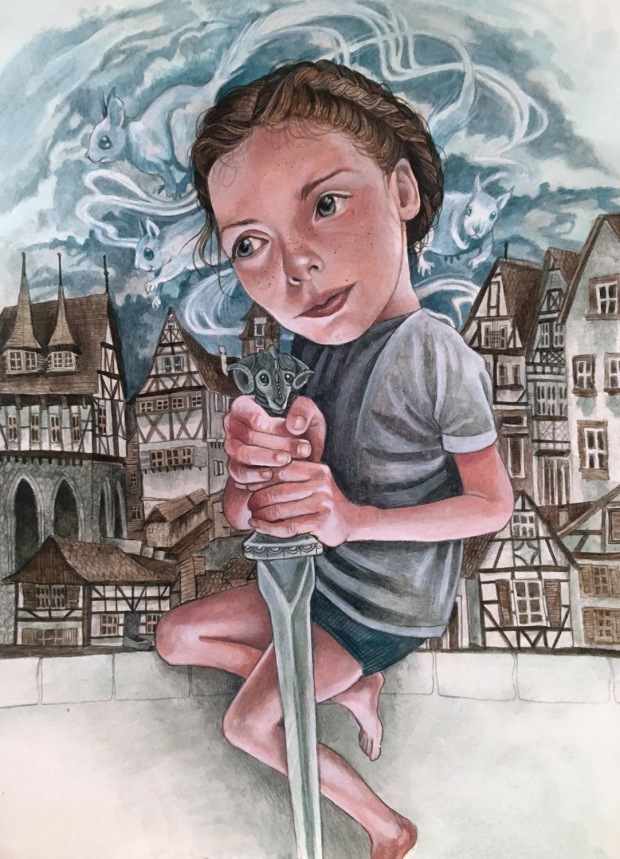 And as fancy and deep-thinking as I just made this all sound, it’s really ultimately just a doodle in my sketchbook, stemmed from an episode of Adventure Time.  Maybe it’s not hanging in a gallery or painted in depth on a 15-foot canvas, but that’s okay.  Maybe it doesn’t have some deep cultural impact, but that’s okay.  I’m the luckiest girl in the world to have an art-related job, and still get to make art for myself in the meantime.

And that’s more than okay. ❤