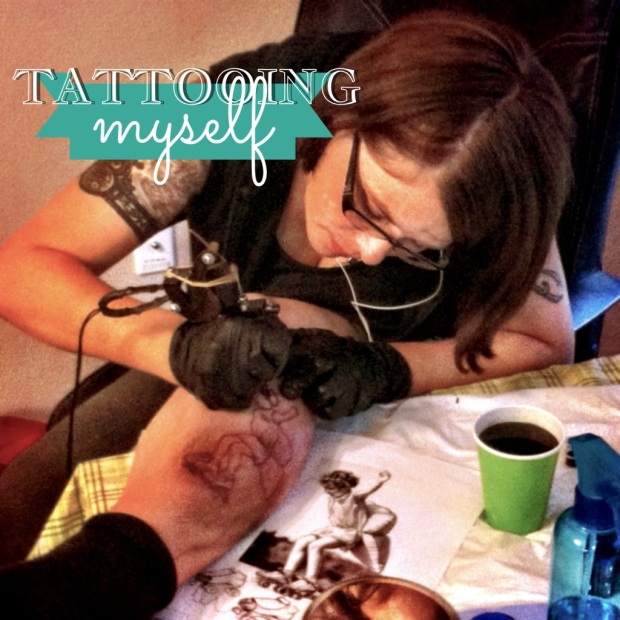 Remember that time I tattooed myself? People have asked me about my leg tattoo, and I’m not TOO sad about how it turned out, so I’ll share.

(Let me put it out there that if you don’t have prior training in the art of tattooing, I would suggest to NOT try this at home.  Go to a professional.  They are paid BECAUSE of their experience, and a good artist is DEFINITELY worth it. I have some prior training, professional experience & equipment, and I STILL don’t always know what I’m doing.)

I wanted a derby tattoo. Not one that had allegiance to any certain team, but one that just represented a love for the sport and what it did for me.  I joined derby in Alaska a few months before my husband’s deployment and it was a good distraction from the stresses and worries of life and a 2-year old. I worry about EVERYTHING, but once you get to practice, you pretty much have to leave it at the door and focus on your drills. I loved it, and put a lot of time, energy, and creative effort into it. So I wanted something to sort of mark that time. I found an old black & white retro photo of a girl skating with a pillow on her butt, which I found hilarious, because she’s all-out jumping at the same time. This is sort of my personality, too. And to top it off, the little girl in the pic had curly hair like my daughter. Taking time for myself away from my daughter, even for something I was passionate about, was very difficult for me, but I think it made the deployment a little softer a blow (we all know the key to a deployment is distraction, distraction, distraction)…

I made a couple of modifications to the original photo. First, I was initially hesitant to add my derby number, but it’s a number I associate with my husband, so I decided it was safe. He had always been so super supportive from the minute I joined.

Second, the girl in the original pic had old-school strap-on-your-shoes roller skates. I traded them out for a portrait of my favorite pair of skates…Reidell Minx 965s with Sure-Grip Avenger 45 degree angled plates. I’m cheap when it comes to clothes, and I’m not one for designer bags, so this was a BIG purchase for me. But, lemme tell you, those boots were MADE for flat-footed folks like myself and they were HEAVENLY. And the Avenger plates were like skating on butter. I LOVE them.  They were so sweet & sassy, I called them my “Darth Skaters.”  My Caddilacs.  I have leather toecaps on the ends with cute little red skulls, so I added those, too.

As for the tattooing itself…..well, it could’ve been better.  Tattoo artists have warned about tattooing yourself; you’ll be overly critical, you’ll obsess about it.  As your work improves, you’ll regret your earlier work.  But I thought if I was willing to tattoo on someone else, I should trust myself to tattoo myself.

Turns out the tattoo artists are right, in a way.  The lines were QUITE wobbly because I was SOOO nervous about how it would turn out.  There is a technique for artists where you draw something from a reference upside down, so it loses its preconceived shapes and becomes just the shading & shapes that you need to translate to your work.  I have never been good at this technique, and despite my practicing drawing it several times, I wasn’t crazy with how it turned out.  The face, more specifically.  Looking back now, it’s such a smaller tattoo that the details (or lack thereof) of the face don’t matter much, but I was REALLY down about it at first.  I thought I had butchered it.

All in all, though, I am pretty happy with the final piece!  It means what I wanted it to mean, and I don’t think it turned out TOO bad for tattooing it upside down on my own leg.