By busymockingbird on September 30, 2013

Okay, whew.  Here we go.  If you’ve read some of my older blog posts, like this and this, you’ll know that despite my best efforts, I have amassed quite a considerable amount of success at FAILING in the realm of “contests” (see how I put a positive spin on that?).

Contests primarily function to draw outside viewers to a certain website/blog.  Meaning if I have a mediochre entry, I can remedy my mediocrity as long as I can simply get enough people to vote for my mediochre entry, thus drawing attention to the website and gaining favor. Totally understandable.  I get that.  But totally inaccurate, and unfair, in my opinion.  Heartbreak ensues.

So I decided to run my OWN contest.

Not because I want to reign supreme and lord over all things art.  Not to finally be the “one in charge” of choosing a winner.  (Actually, that part worries me, as a frequent non-winner.  I know how it feels not to win, and I am going to dislike being the person to be the cause of that for someone.)  So you want to know why I’m holding a contest, then?  Really?  Because I appreciate everyone who reads the stuff I post…and because I REALLY want to see what you all can do with this.

After the Collaborations post made such a hubub, I thought it might be fun to have you all try it out for yourselves.  So I drew a head for you. 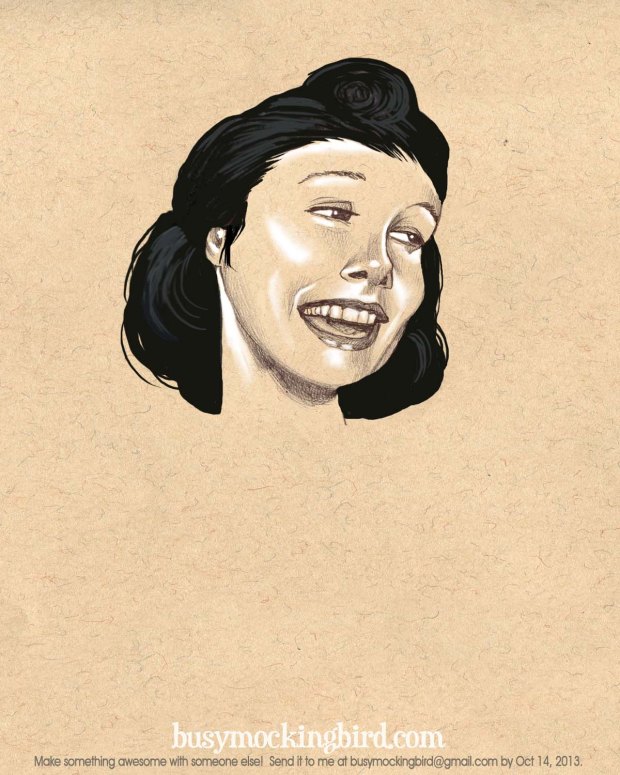 I’d like you to make something awesome with it….BUT HERE’S the CATCH:  you have to make it WITH ANOTHER PERSON.  You could have a kid help.  You could have a friend help.  A grandmother, a neighbor, a relative, a stranger.  Anyone!  And you don’t have to paint–you can sew, you can paste, you can marker, doodle, photograph, whatever.  You can paint or draw on top of it, or cut it out.  (And if you’re going to cheat and only create something by yourself, at least have the decency to use your nondominant hand as your collaborator, since I’ll have no real way of monitoring this)  There doesn’t have to be any deep meaning, or it even look like you imagined it would.  The beauty is in the experience of creating something WITH someone else.  Of not trying too hard to MAKE it be something, and just enjoying what it becomes.

Then scan or take a picture of what you created, and send it to me by Oct 14th at busymockingbird@gmail.com.

(And do I have to say this?  Please, don’t send me anything obscene or disgusting.  I mean, my FOUR YEAR OLD will eventually be looking at these, and I’d like to not traumatize her until she’s at least in her teens.)

And here’s the deal:  the winner won’t be determined by the number of posts you make or likes you get.  Maybe that would benefit me in some way, but it’s not fair.  So the winner will be determined by my daughter and me.  We’ll pick which one is the most creative, most interesting, most enjoyable.  I’ll post a bunch of them up on the facebook page in the process, just to show you all what other people are doing.  Just like in Highlander, there can be only one.  But I might be compelled to throw in a small print for a few runners up….so feel free to share this post on Facebook to have friends try it too!

So what does the winner get?  Hm.  Well, after taking suggestions via facebook, I’ve decided that the prize will be a signed custom collaboration portrait by my daughter and me.  I’ll put some stipulations here, since I don’t want my daughter chained to an art table, sweating away… No more than two faces for the winner.  I draw them, and she turns them into whatever she fancies. (I can sometimes give her suggestions, but she usually goes in her own direction, and I’m not going to scold her for using her imagination.  I can’t MAKE her draw something specific, but I can suggest it.)  Then I paint it up, we sign it, and send it to you!   Sound good?

The thing is, I’d REALLY like you to to do something special to YOU.  Find a loved one, meet a new person, collaborate with someone at a nursing home or a hospital.  Have a classroom help.  Get creative, and ENJOY it, not just because you want to win, but to really enjoy the experience!

1.  Do something awesome with this head.  (right click the image, save it to your desktop, print it out–thick paper might work best)

2.  Create it WITH another person.

3.  Send a picture or scan of it to me at busymockingbird@gmail.com.

5.  Winner gets a signed custom portrait!!

This is the first contest I’ve ever run.  I’m not a pro at this or anything.  We’ll see how it goes.  I mainly want to see everyone get creative and have fun in the process, so I’ll do my best to make sure I work it out right on my end.  So I wish you all luck!!!