By busymockingbird on November 6, 2013

For those who have never heard of it, “exquisite corpse” is a surrealist game played with either words or drawings, in which several artist collaborate on a piece by only being able to see the tail end of what the previous person contributed.

When I did the collaborations with my 4-year, a few people commented that it reminded them of the “exquisite corpse” game, in having to elaborate and expand on someone else’s work.

By chance, a coordinator with Exquisite Corpse Festival contacted me about doing a page for a potential comic book idea with the same premise–picking up where the previous person left off, and elaborating on it.  They thought the idea of me working with my daughter fit in well with the project, and might make for an interesting page.  I thought it sounded fun.

When the time came, I was surprised to get not a drawing to elaborate on, but a snip of text.  It was something that sounded like a large creature confessing to a therapist of some sort.  …And that was it.  I had no idea what this creature was supposed to look like or anything.  No clue of what had happened before it.

So I started by just drawing a dragon head.  I tried to make him sort of expressive…if he was confessing his tale, he’d probably be pretty personable, right?  I wanted to make him very “foresty” (maybe just because it’s autumn, and I wanted to use the colors), but that’s about as far as I got.  I wasn’t sure WHAT to do with him next.

I showed our daughter.  It was strange–it’s nothing at all like what we usually do.  But we love experimenting and having fun drawing together, so I was sure she’d come up with something cool.

Sure enough, she drew a big circle body and looked at it for a minute.  Then she added some zigzag lines.  He was in an egg.  “He’s hatching!” she said.  And certainly, he was.  Awesome!  I decided for my part, to have him telling a story about an “awkward phase” he had gone through.  That way, it didn’t matter WHAT he looked like in previous pages.  Pretty unintentionally clever, kiddo…!

Now,  we’ve been playing around drawing monsters, which are quite fun.  We’ll see what comes of it.  After all, it’s all just one big surrealist experiment, right? 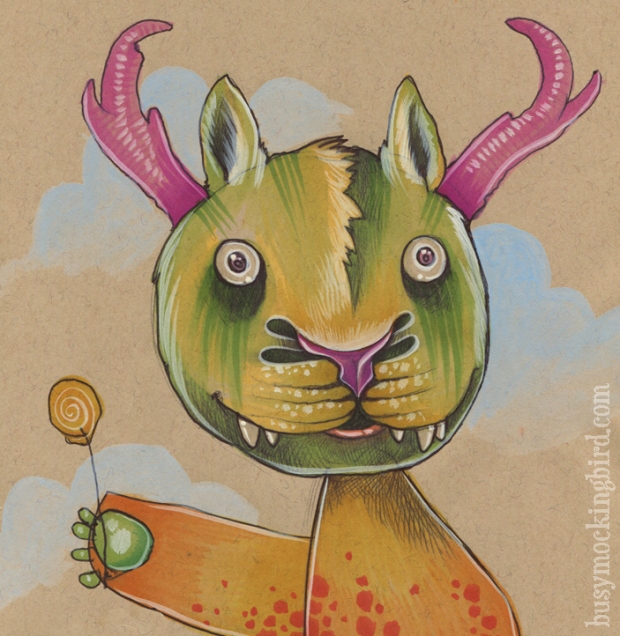 (What looks like a pink arm on this red & blue one is actually…um…an udder?  Apparently, they just learned about milking cows at preschool.)

(This little purple fella is combing his beard)