By busymockingbird on December 4, 2013

Frida and I go way back.  When I was a young ‘un in art school, my roomates and best friend teamed up to gift me a book or two from the local book store, and one of them was the Diary of Frida Kahlo:  An Intimate Portrait.  My friends had said that if it wasn’t my cup of tea, I could exchange it.  Well, being more into fantasy and figural art at the time, and not yet having gained an appreciation for more modern artists, I decided to do something unprecedented for me, something I had never done before:  I exchanged the gift for two books of two artists I DID know: Egon Schiele (maybe NSFW) and Boris Vallejo.

And I always felt guilty about it.

Later, I took a course in 20th century art, and while it wasn’t always my cup of tea, I began to gain a much stronger appreciation for the “why” of modern work, and even later still, for women in art—bold women who didn’t just paint flowing, pastel things, but who painted strange and thought-provokingly surreal images.

It was like seeing an old friend!  Involved with everyday things as well as discovering our daughter’s artistic side, I  had forgotten all about Frida.  Our daughter was excited to know who it was on this new shirt.  I told her excitedly, “It’s an ARTIST!”  She said, “a GIRL one like me and you?” and her excitement was clear:  there was another girl, like me and like her, that love love LOVED to draw and paint.

I remembered that there was a children’s book on Frida.  We got it, and she loved it.  The beautiful, simple paintings, the easily-told story.  Just a wonderful introduction to an artist, told in a simple way that a kid could understand. 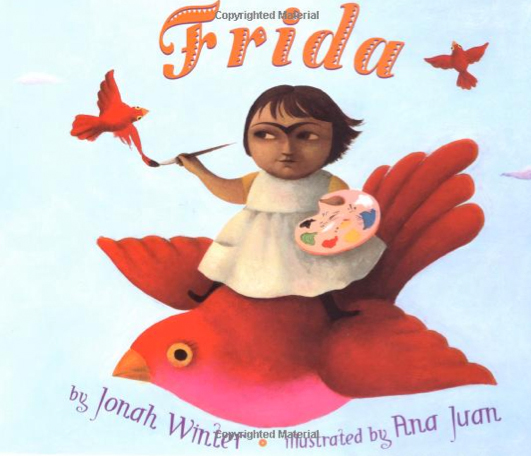 When our little collaborations became a regular thing, I decided one day to draw Frida in my sketchbook.  Since she was familiar with her, I wondered what she would do.  I showed her a picture of how the real Frida looked and how she dressed.  She studied it carefully, and began to draw, adding squiggly flowers in her hair and on her dress.  When she started adding on to her arms, I asked her what she was drawing.  “Paintbrushes,” she said.  “She’s painting.”  And that made me smile. 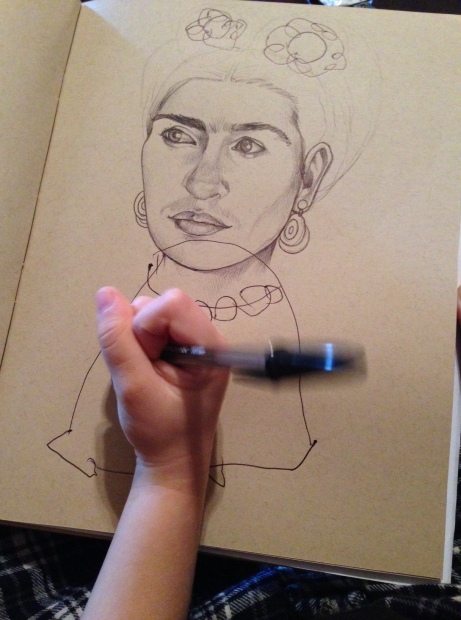 She’s had a fondness for Frida since that shirt first came.  It was a great opportunity to teach her about other artists.

The other day, I doodled Georgia O’Keefe, just for giggles.  I told her a little about how Georgia was an artist who loved to draw flowers.  (FLOWERS, people!!)  So she drew her with flowers in her hands.  She wasn’t quite as interested in Georgia (admittedly, neither am I), but maybe now we’ll make this a fun little habit.  It may be a good way to teach her about other artists and why they were such a big deal.

Hmmm….Maybe I see a new series coming on… 🙂

If you want a little Frida for yo’self, I put FRIDA PRINTS up at Society6.  I think I may need a mug of my own….

UPDATE:  I did a step-by-step walkthrough of Frida with Paintbrushes for Jerry’s Artarama.  Check it out!