Sometimes I see a project from another site that I just can’t help trying myself.  This one comes directly from Molly Moo Crafts, and when I first saw the little wooden bead necklace she made for her daughter I did an inner squee, and had to give it a try.

To begin, here is a picture of Molly Moo’s super adorable necklace:

Isn’t it super cute?  I TOLD you it was super cute.

So I showed the munchkin, and she liked it a lot…but, as usual, her imagination got carried away as she started making mental customizations.  “Maybe you could make me a Batman one,” she said.  “Or Robin.  Or some monsters or creatures or something.  Could you make me a pirate giraffe?”

As is often the case, a simple idea, when presented to her, goes in a multitude of directions.  So, following her creative lead (as I often do), I gathered my supplies (wooden beads, string, and paint), and made her a gosh-darn pirate giraffe (she requested the additional neck bead, which is a pretty cool idea, actually), although his face & nose don’t really lend themselves well to a sphere-shape…

On Molly Moo’s tutorial, she glues the beads in place, but I thought it’d be pretty cool to leave them all separate and have fun interchanging them each day.  I basically just took a strand, tied a knot in the end, and you can slip the different ones down each day.

We made a panda for a friend…

And the munchkin requested her own version, but as a pirate…(I don’t know what the deal is with pirates lately.  She’s really not THAT into pirates.)

And, as always, the obligatory C-3PO.  Have I mentioned our daughter is madly in love with C-3PO?  She is.  Which is probably why she wasn’t so impressed by this one.  “Um…Mom, he’s too round and he doesn’t have arms & legs.”  Jeesh!  Everyone’s a critic.

So it seems like a super easy, super fun project, right?  Well, if there’s a way to mess a project up, I can find it.  At the craft store, I accidentally bought the beads that already have a shiny gloss on them, which I painted on top of, and sealed with varnish spray.  I didn’t think it’d be a problem, but after one day with a 4-year old, that thing looked like it had been battle-born and bruised, it was so messed up, scuffed, and dirty.  I finally went back to the store and got the plain ones… 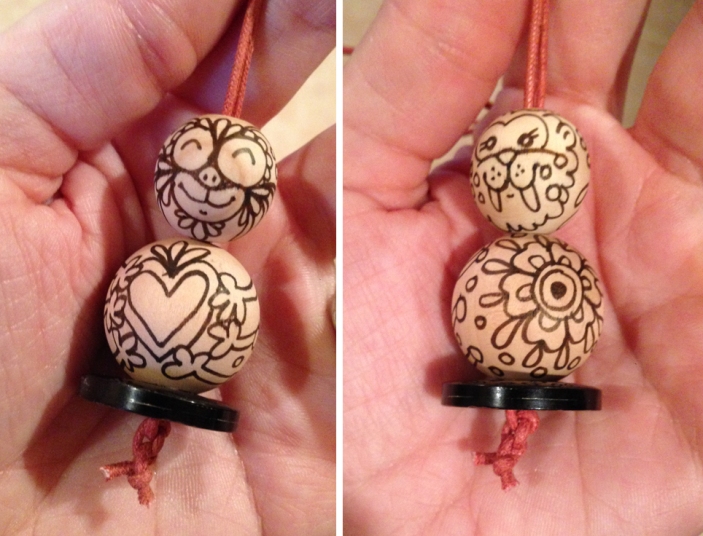 These new beads required a smaller string, since the holes were smaller.  Worried about the knot slipping through the bottom bead hole (it happened with the thicker rope, too), I put a button down first.  I’m sure you could do way cuter bead things, but this is what I came up with about 10 minutes before we had to leave for school.  I also didn’t get a chance to varnish it.  Surprisingly, though, it came home with her from school fairly unscathed!

So there you have it!  A wonderfully simple project directly inspired by Molly Moo Crafts!  There are so many fun things you could do with these, and the kids in her class have fun looking at the different sides of the faces of the newest one.  The teacher even asked about it, so I’m sure they’d make GREAT teacher gifts!  So grab some beads and some string, some paint or some markers, and see what happens!