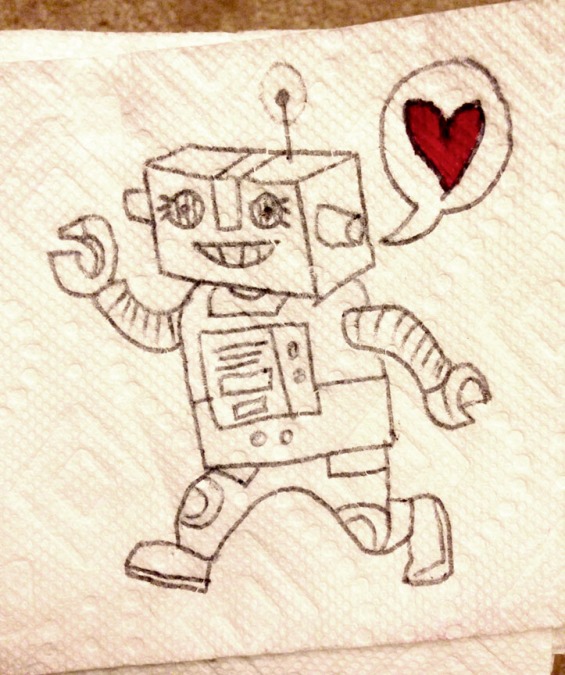 Wow!  Last week on Facebook, I posted some of the napkin doodles I do for Myla’s lunches, and it got so many positive comments!  So I thought I’d share some other lunchtime doodles with you.

For some reason, when I was pregnant (and then later when our daughter was a baby), I was obsessed with the idea of bento box lunches.  I don’t know why–but I thought they looked like so much fun!  How exciting to be able to be creative with your kid’s food, to have them open up their lunch to a nice little creative box of sunshine!  But sometimes as a new parent, the things you THINK you’ll do and the things that actually WORK for you are two very different things….

For example, one of the first times I made a school lunch for her, I put together a super-sweet, super cool bento box (a frog that I had gotten when she was still a baby and had no use for it)…a fancy fru-fru one, just like I had seen on Pinterest, with all her favorite foods in it:

And you know what?  She only ate the grapes.

Seriously?!?  I asked her why not the rice–she loves rice!  She said, “Yeah, but not at school.”  Okayyyyyy.  And the bottom compartment hadn’t even been opened!  And it was then that I learned another lesson:  If you’re going to use fancy bento boxes, be sure to SHOW THEM HOW TO USE THEM first. Hehehe.

So, yeah.  Bento boxes, as cool and amazingly creative as they are, just don’t work for us.  I really wish they did.  Not to mention the fact that she’s developed a super-picky kid palate and I’m lucky if I can get her to eat a PB&J.  (Seriously have you SEEN some of those bento boxes?!?  As beautiful as they are, I often think, “do those kids actually EAT that?!?!?  Our kid won’t eat ANYTHING!)

When we were kids, my mom used to leave little notes in my lunch, and I have VERY good memories of them.  …Okay, honestly I can’t remember what a single one said, but I definitely remember the smiles and warm fuzzies they gave me (thanks, Mom!).  It was like a little reminder that even if you were having a rough day, there was SOMEONE on your side.  Even after I got “too old” for them, I still couldn’t open a lunchbox without thinking of them and secretly hoping a little note was tucked in there.

I mean, uh–NO!  Teenage Me was waaaayyyy too mature for that.  Ahem.  🙂

So when our daughter started full day Pre-K last year, I wanted to leave her something sweet in her lunch, too, to let her know I was thinking of her.  She’s an only child–and a very social one–so she ENJOYED the idea of going to school and didn’t have a problem leaving at ALL…but a full day away seemed like such a long time!  I just wanted to put a little something in her lunch to remind her that I loved her.  She’s in Pre-K, though–which means she can’t read.  So what better than to doodle on her lunch bags?

Sometimes I kept to a theme.  The first one I did was Star Wars–have I mentioned she loves Star Wars??    Hehe. 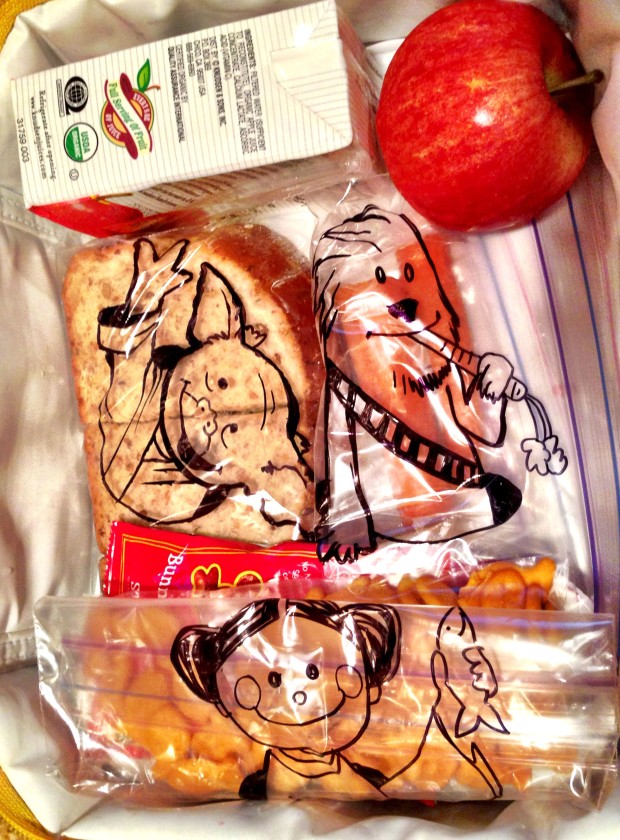 Also inspired by the Lunchbag Dad, I did goofy little monsters and bugs and dinosaurs.  All things that she likes.  As I said, she can’t read, but she does know that hearts mean “love”…so I tried to always put hearts in there somewhere.

Sometimes the doodles would be related to the food inside, like this heart-shaped sandwich (I used a cookie-cutter to cut the bread), and the monster eating the popcorn.  Or from books we’ve read…the “good apple” at the bottom was from a book about teasing called “Bad Apple” that she really loved at the time. 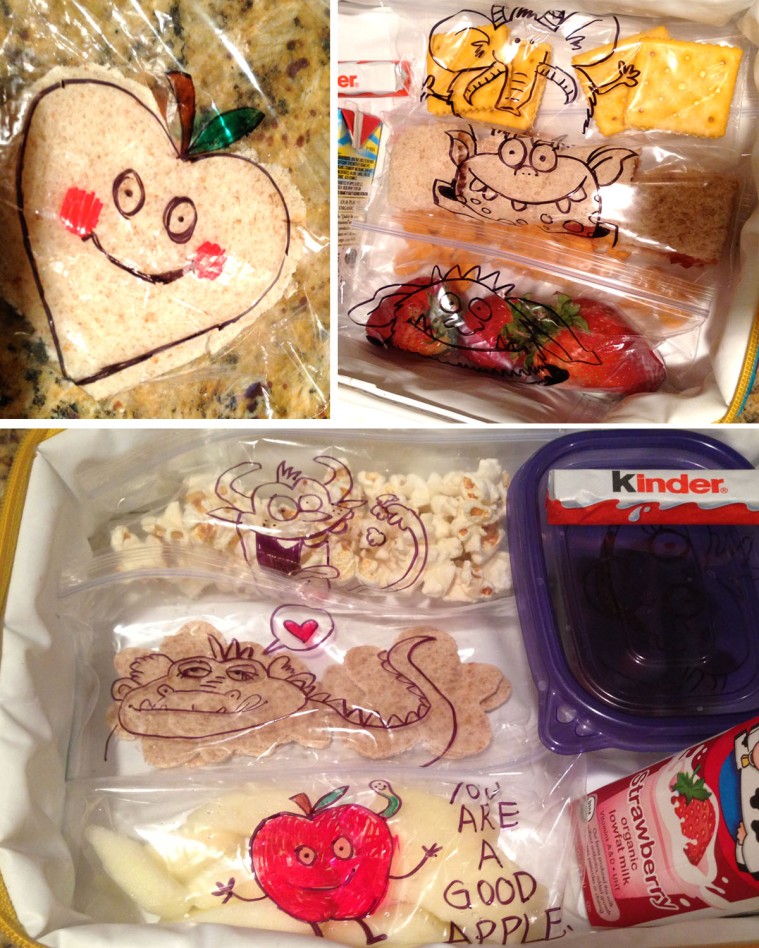 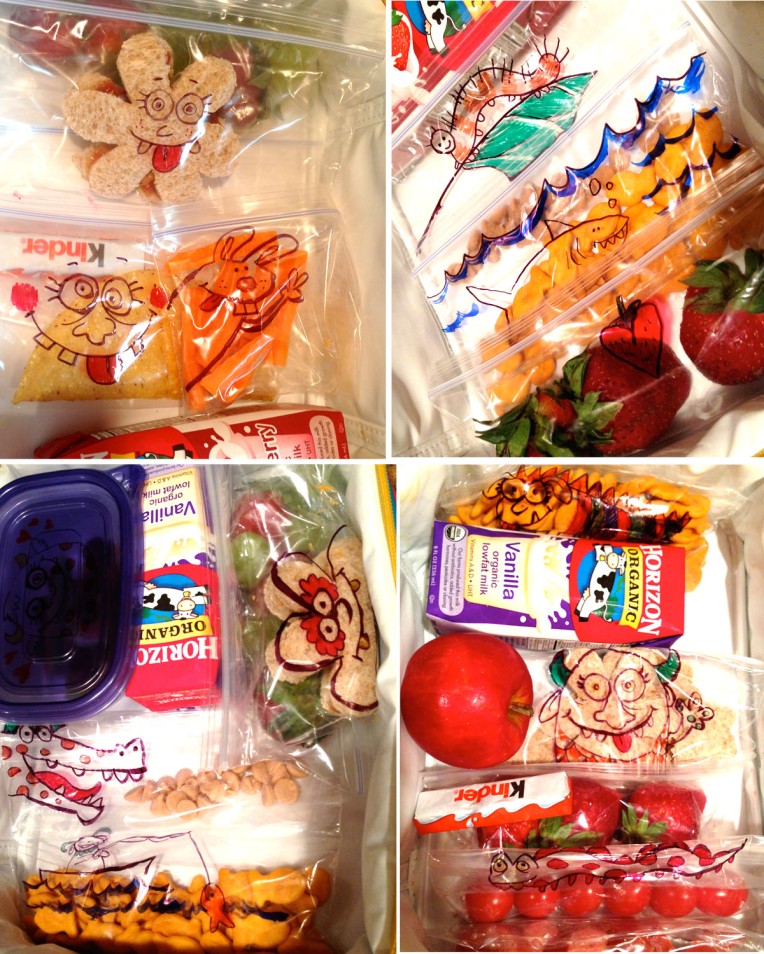 I often visit her at lunch (which she loves), and for her birthday, I decorated her bags with little birthday alien monsters:

But as fun as they were, after awhile I started feeling a little guilty for using all the disposable ziploc bags…So I decided to make some reusable lunch bags, and drew on them with Sharpies.  I even did a little blog post about it, ages ago… 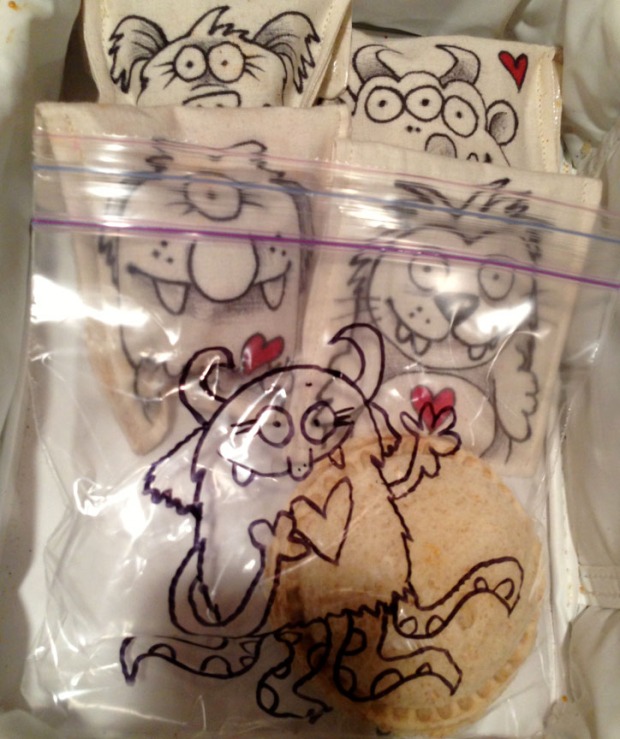 So now that our bags are fabric and already have doodles on them, there was no need to really draw on anything anymore….which kind of took the pressure off every day (those doodles don’t take long, but DARN!  Sometimes you just run out of time!), but I also kind of missed them.  So my solution came to me when I visited her at lunch one day and saw all the kids wiping their faces on their sleeves, including my daughter, whose face had become covered in peanut butter and jelly:  Napkins!

No, they’re not reuseable, but hey–one half-napkin a day isn’t too shabby.  I like to doodle little things that pertain to whatever she’s into at the moment.  And if it’s nothing in particular, I just make a goofy monster of some sort.  She gets a kick out of it, and loves showing them to the kids at school at lunchtime.  And from what I can tell, she gets the warm fuzzies from them, too…

Still, even after all of this, she rarely USES the napkins.    I find them in her lunchbox after she’s thrown all the other trash away, when she brings them home nearly untouched….

I mean, who needs a napkin when you have sleeves, right?  🙂

So, yeah.  Pretty pointless, right?  Why go through all the trouble for something that she’s not even using?  Well, simply because it doesn’t take much effort at all, and I know it makes her smile.   …And really, there’s nothing pointless about that, is there?

Some readers on Facebook have shared that their parents used to write notes, draw drawings, use special stickers, or write math problems that needed to be solved when they got home, little “secret messages,” or just smiley faces.  So do you have any good lunchtime memories?  Do you have anything special you do for lunchtime?  I’d love to hear about it!