Holy Cow.  In just under two weeks, our little 4-year old will be 5.  I know it’s cliche, but time does really fly!

For being an introvert, I actually quite enjoy throwing a kid’s party.  It’s my sister’s fault, I think–she always threw cool parties for her girls (like the spy party where they all had to put on fake mustaches and costumes and look for clues to solve a “mystery”) and it always looked like so much fun.  Honestly, I don’t do it for the guests, really….I do it because it’s FUN FOR ME!  (Take a look at Myla’s 2nd “Mad Hatter” birthday party…)

Before Texas, we lived in Fairbanks, Alaska.  This time of year in Alaska, the waist-high snow-filled yard FINALLY starts to melt after 8 long dark months, and the sun comes out (eventually all day AND night!).  Alaska in the spring is AMAZING–people plant and grow and put out as many flowers and plants as possible, and because the ground’s so saturated with melted snow, everything GROWS so well.  You’ve got to cram a whole lot of what I called “sprummer” (spring & summer, because it’s so short) into the FOUR months you get without snow.  My husband was deployed just before Myla turned 2, but was back in time for this third birthday, so we wanted to make sure it was fun and easy and low-stress on both of us.

So, for Myla’s 3rd birthday, we decided to throw a garden party with our friends.  But not a fancy tea party-type garden party…a messy, dirty GARDENING party!  I made a point to tell everyone to wear some get-dirty clothes so the kids could have some fun.  I found a tutorial online for really cool balloon flowers… 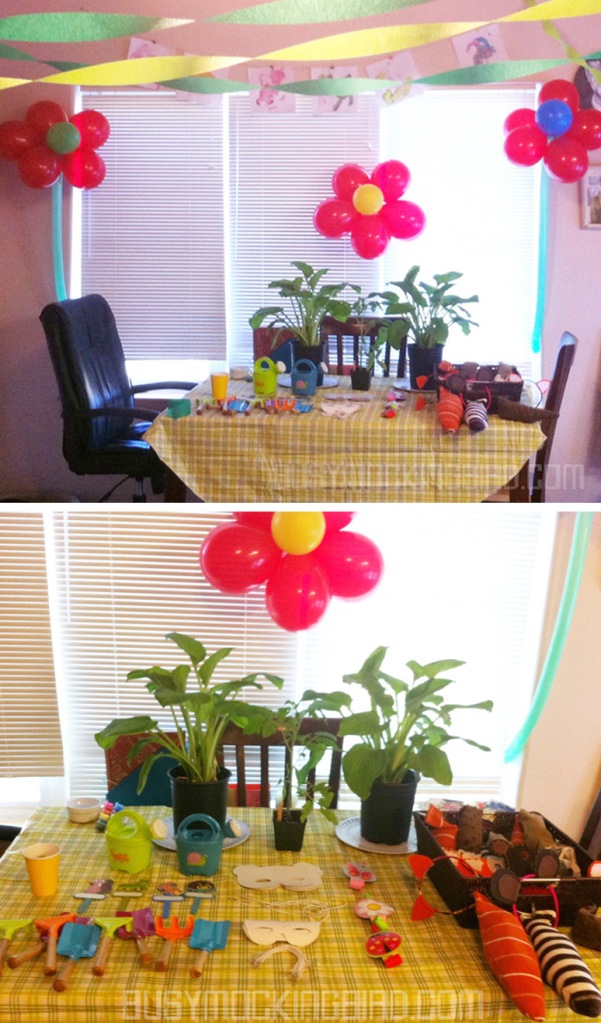 I had a few dollar-store garden tools and water cans, and some paper masks so kids could make and decorate animal mask.  I also made headbands with little felt animal ears attached, and little clip-on tails.  I had a quick little set of facepaints to throw some whiskers on anyone who wanted them, and little forest-themed temporary tattoos.

With kid parties, I find it works very well to have some sort of project or activity for the kids to do when they FIRST get there, so they’re not sitting around just waiting for everyone to arrive.  (I try my best to make sure it’s as stress-free for parents (and therefore ME) by having things to safely keep the kids busy with.)   I put some crayons in a bowl, some tablecloths on the floor, and let them doodle.  I had a posterboard that I had doodled some animals on out as a coloring page as well.

As crafty as I can be in the art field, I have NO SKILLS AT ALL with actual food.  But I CAN make a mean snack!  I found most of these ideas on pinterest and kept with the forest-theme. 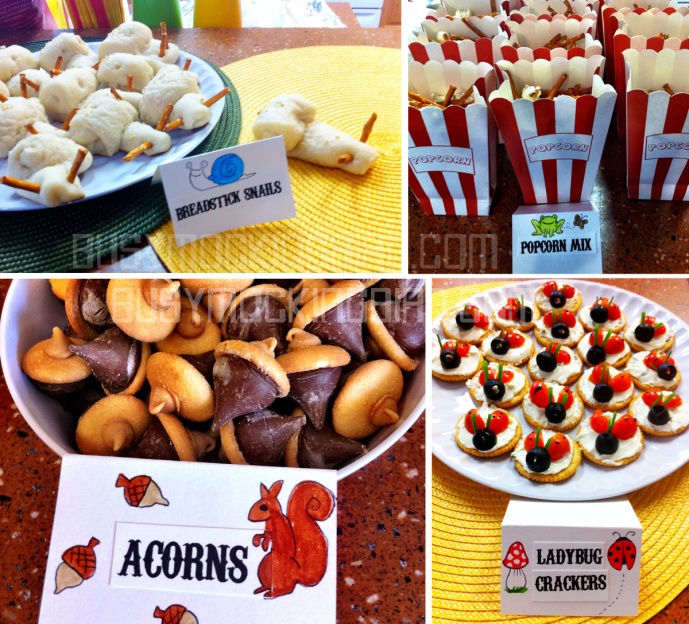 There were some that were NOT as successful.  So in the spirit of sharing what DOESN’T work, let me show you my chocolate spoons, and my ugly hedgehogs…(because I couldn’t find regular donut holes and had to get chocolate ones, and it just turned out all kinds of wonky, and hardly anyone touched them, and I can’t blame them one bit.)

The internet is FULL of all kinds of owl cupcake ideas, so I sort of took them all and made my own version, with pre-made candy eyes, colored icing, and mini nilla wafer wings.

But my FAVORITE part of all is making the cake! The night before, I let Myla help me mix it…

I wanted to see if I could make a mostly fondant-free cake, and I’m pretty proud of it!  I am by no means a pro cake-maker, but I used to watch a lot of cake decorating shows on tv, so that counts, right?  I just went crazy with the patterns and designs, and had a lot of fun with it.

Myla’s favorite part of cake has ALWAYS been the icing.

We are very lucky in the toy portion of life, and Myla has a LOT of toys.  So for her 3rd birthday (since she was young enough we could get away with it), we asked that instead of toys or gifts, that if they liked, guests could bring a flower or plant we could plant in our “friend garden.”  We were lucky also, because Myla’s birthday falls RIGHT at the beginning of springtime in Alaska.  It was SO nice to see all of the beautiful green plants and flowers!  I had popsicle sticks and a marker out so everyone could write their names and put it in their plant pot. 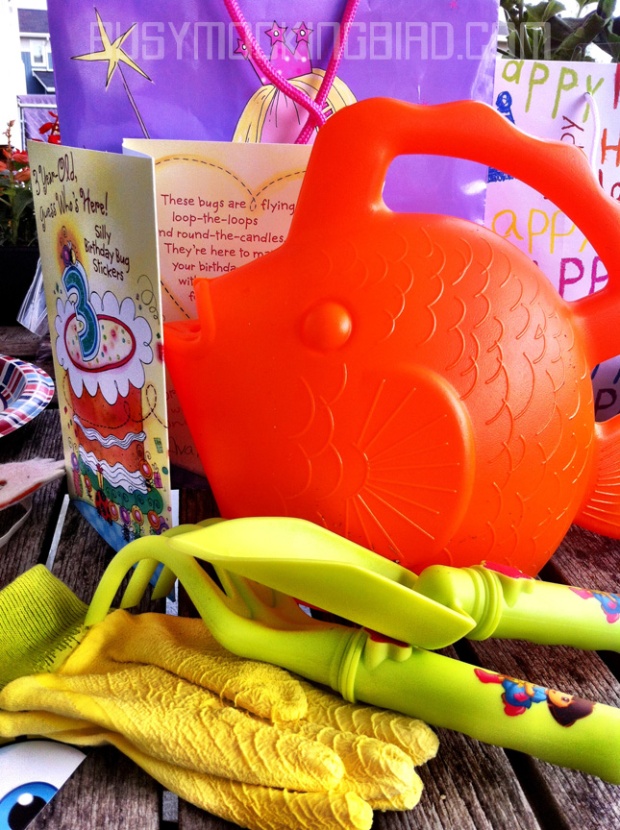 After we ate, we all went outside to let the kids get nice and dirty.  I had the hose sprayer out for the kids to spray in the kiddie pool, and they all took the little dollar-store tools & buckets.  I had gotten a few bigger plantholders and let them throw random seed packets down and water them.  Honestly, it doesn’t matter if it grows, right?  They had fun just getting dirty and pouring water.

Later, after the party was over, I replanted the plants in the garden bed, using plastic spoons so they’d be waterproof, and put everyone’s name on again (okay I should’ve done that in the first place, but I didn’t think of it at the time). 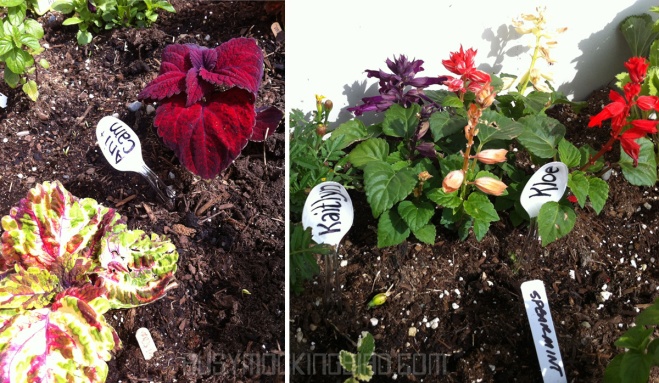 And after several months of watering and gorgeous Alaskan 24-hour sunshine (because goodness knows I don’t have the gardening skills to actually grow anything on my own), we had a BEAUTIFUL “Friend Garden!”

Like I said, she was young enough that we could get away with the idea of a garden instead of gifts.  Still, we try not to focus so much on the gifts as much as getting to have a lot of fun spending time with friends.  This year, with the husband deployed, I’m trying to make it easy on myself, so we’re going to a trampoline bouncehouse in town.  Myla asked for a Totoro & Ponyo party, which I think is TOTALLY fun, and I’ve already started working on ideas.  I can’t help it–I have such a fun time with it!  And the main thing is to make it a fun time for her.  I know we’ve only had four, but this garden party was one of my all-time favorite birthday parties!  It was low-stress, and the kids had fun.  For me, doing little things well in advance makes it easy.  And it’s so nice when it actually comes together!