By busymockingbird on September 9, 2015

I am an “illustrator.”  I draw what I like to see, and there’s usually not any “deep” or lofty meaning behind any of it.  It’s nearly always taken best with a good sense of humor, never with a serious face.

But lately, I’ve been trying out a few things that mean something.  And since I’m usually so bad at it, I thought I’d sort of go through my thought process, in case anyone else was having trouble connecting those same dots…

There was that time when our daughter was going through a thing.  You know those things?  Where they’re nearly insufferable, and they make you crazy because you don’t know how to handle it, and the way you’re handling it isn’t working?

Well, I was trying to describe to myself how that FELT.  It felt like holding too tightly to too many wild, flapping things, flapping in that aggressively frantic way wild animals act when they’re scared.  It felt like I was trying to explain too many things in too much detail, and none of it was taking any hold.  It was going skyward, it wasn’t making any sense to this wild, frantic creature.  It felt like I had lost my way, and couldn’t even tell from the stars which way to go.  And this is what came out (I called it “A Very Bad Day”):

And that felt good.  Much better than words.

And as the days went on, I felt like I had sort of found my general shape, but I was torn into so many different directions, in so many different ways.  I was having trouble focusing on priorities, because EVERYTHING seemed like a priority, and everything needed attention.  And yet nothing was working the way I wanted it to work.  It was hard–It would be SO much easier if you just didn’t CARE, wouldn’t it?  But I wasn’t going to give up.

So I drew this, and added this line to describe it:  “We’ll get through this, one screaming monkey at a time…” 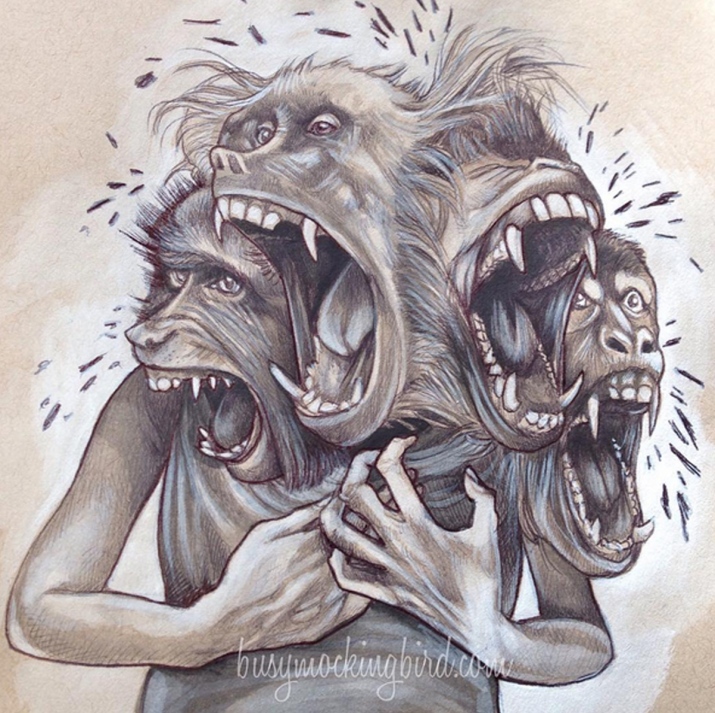 After a bit, I became more comfortable with the chaos, and just sort of settled in.  I thought of Ren’s maddening laugh in Ren & Stimpy’s “Space Madness.”  You know–the kind in cartoons where someone straight up loses their mind?  Yeah that.  That’s what it felt like.  Like I didn’t know who was more crazy…  And that’s like a hyena laugh, right??  That crazy animal giggle because as hard as you’re trying, it’s NOT WORKING and it seems like you’ve tried everything…

So that’s where this one came from…not so much a title as a statement:  “You have to keep a sense of humor about these things…”

After a bit longer, things start to settle down a little.  What’s so frustrating is that we’re trying to keep a handle on everything, do the best we can, and raise a happy, healthy kid, and she WON’T LET US.  All that stuff my parents said about it “being harder on me than it is you,” is true, and I was only JUST realizing that.

And yet, even after all of that, I can look at that sweet little person (usually when she’s asleep) and remember why we’re struggling so hard.  Because she’s special and amazing and wonderful.  I thought of those wild things, all primitive and clumsy, and how they still survived for years and years without much effort at all…Because you have to protect the Delicate Things… 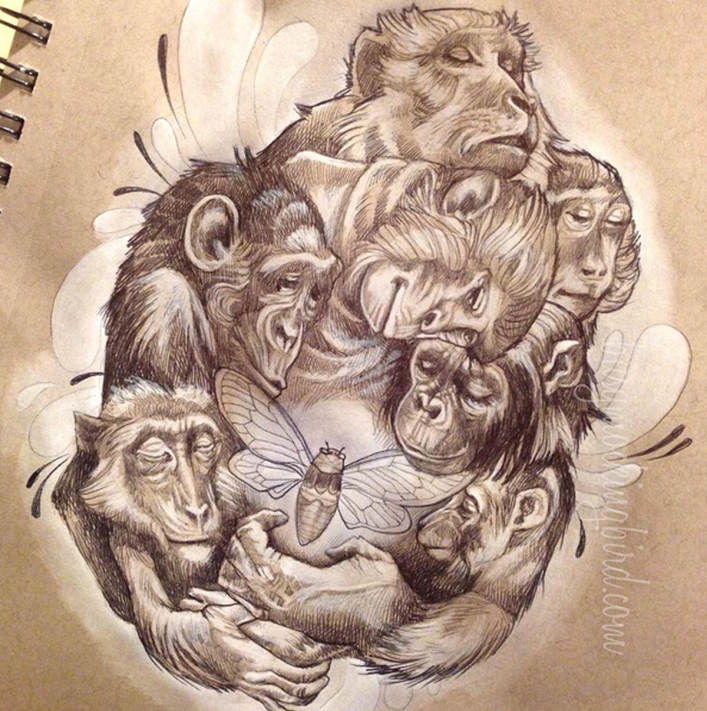 I thought of how much attention we give to this one little tiny thing that has such a HUGE impact on our world, and how all you want to do is love it and hug it, and sometimes it just doesn’t WANT that.  I thought of two or three or four grown adults and the hoops they jump through for a crying baby or a restless toddler on an airplane, because they just want to calm and comfort that spiny little thing…but sometimes it HAS to pull away.  I thought of a mother lion, and all these very attentive hands doing their best to cuddle this small, prickly, spiny creature….

I called it “Attempting to cuddle the crankies…” 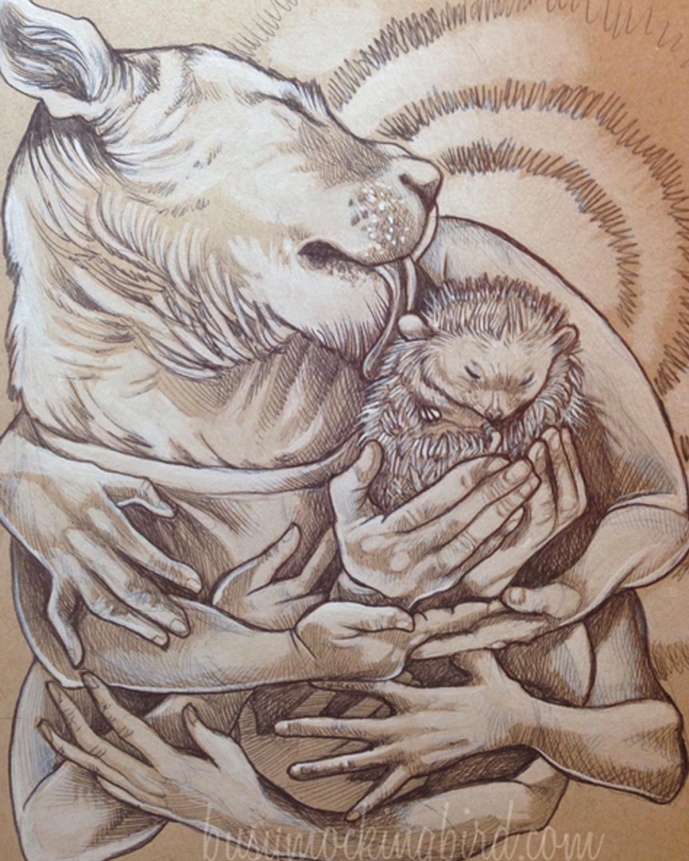 Around this time, I had an experience that reminded me to breathe…that reminded me that I had no control over anything, no matter how hard I bash my head against the wall.  That I could do everything that I considered “right” ALL the time (which I realize is impossible), and things could still go terribly wrong.  There is no REAL control.  And keeping it all in and pretending it’s all fine doesn’t help anyone.

And this, as silly as it sounds, is one of the most special things I’ve painted because I was able to get out in a drawing almost exactly how I feel.  I wrote this thought down, because it came to me so clearly, like a meditation:  “Breeeeeathe deeply. Then push it all down low and tighten it all up inside…Maintain what awkward poise you possess simply for the sake of appearances. And keep as calm as a Hindu cow…”

And I’m working on that.

And it might not look like much, but it was one of the few times I’ve been able to connect those dots–to help my hands get out what’s in my mind.  And it helps make things feel a little better.

Art does that for me.  Usually, just the act of drawing something (even if I’m emotionally unattached to it) is fairly meditative and calming.

But for some people, it’s cooking, it’s sculpting, it’s reading, it’s whatever.  So what connects your dots?

We keep chalking butterflies and the rain keeps washing them away....