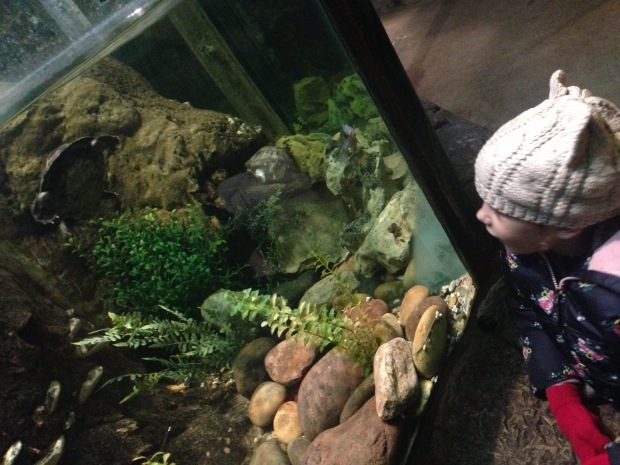 This has been one fun past week, lemme tell ya.

First off, I should explain that I have some back condition called “ankylosing spondylitis.”  It’s a really fun thing, because after 12 years of medications, injections, and infusions, no one can seem to figure out how to treat it.  It’ll be fine for MONTHS and months, and then BOOM–pain and spasms so bad I can’t walk.

Last weekend, with a bit of a painful limp, I was determined to take Myla out & about.  We drove to the Waco Zoo, but by the time I got there, I could barely walk, and decided it’d be easier to push around in one of the courtesy wheelchairs. We looked a mess:  Me, with Myla on my lap at times, rolling around to all the exhibits.  I got out on the uphill slopes and slowly limped my way up, pushing Myla in the chair.  When I was feeling wobbly, Myla would offer me her shoulder to hold onto for balance.  “Just hold my shoulder, Mom.”  Several of the exhibits were closed because it was actually COLD in Texas for once, but we made the best of it, and had a good time anyway.

EXCEPT that by the time we got home, I had spasms so bad I was in tears and could barely walk.  Thank goodness my mom was 8 hours away, and was able to drive down and help take care of us (Thanks, Mom!).  After many appointments, much medication and rest, I’m pretty much back to my normal level of constant discomfort.

So THIS weekend, Myla built a backpack fairy machine.  Like you do.  It was made out of a cardboard box, a milk jug, and lots of duct tape. 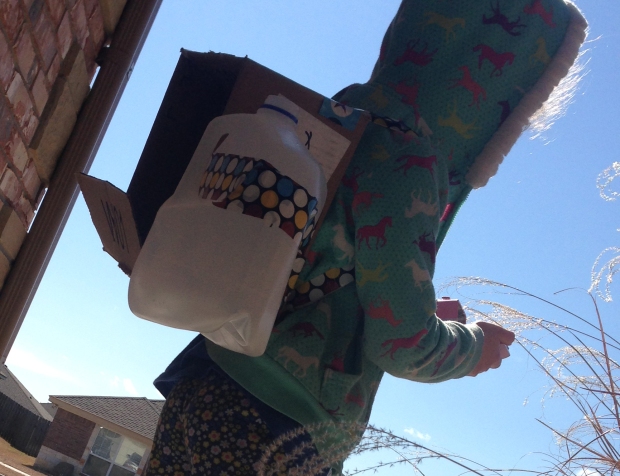 And then she came right inside, spiked a fever of 101, and wanted to go to bed.

So we’ve spent this long weekend at home, pretty much on the couch, bringing down a fever and binge-watching kid’s movies.

At some point this weekend, she drew this picture of me, with a cane and a thermometer, taking care of her, sick in bed.  I sent my husband the picture (he’s deployed), and he noticed, “she sees you’re in pain, but that you’re still taking care of her.”  Which was awesome, because that’s exactly the way it was. (And at least she drew me with a smile, instead of wincing in pain).

Having a sick kid does not always mean they’re just asleep on the couch–she really tried very hard to entertain herself with paper projects, mostly related to whatever movies we watched.

Despite fighting a fever and sucking on cough drops, she kept VERY busy with scissors, paper, and tape.  ALL WEEKEND.

It’s actually a little hard to keep up with–she built an entire petting zoo (complete with pteranadons, ducks, and baby otters) out of paper and tape.  And after we watched the newest Goosebumps movie (admittedly an odd choice for her), she started making books with latches, and the creatures that come out of them….like this floating demon-poodle:

In any case, we’re nearly back to normal!  Just trying to get back on our feet…in some ways, literally.  That whole thing about taking care of yourself so you can take care of others?  That stuff’s true.  In my attempt to care for Myla and get out to the zoo for something to do, I ignored my own pain and injured myself further, when I should’ve just taken it easy.  I’m not a “take it easy” kind of person, so that’s pretty hard for me to do.

I could take a lesson from Myla, though (as I often do), by just accepting it, relaxing, and making the most of it with art projects.  On the couch binge-watching movies if I have to.  It’s often hard for me to tell when “pushing it” will help or hurt (especially with the “push through the pain” army mentality I’ve got ingrained in me).  In any case, we’re finally on the mend now!  So we’re going to take it a little easy this week…which is going to be better for us in the long run, I’m sure.

So from us to you, take care of yourselves!