All my favorite people are weirdos.

When I was little, my sister and I were playing with my grandma, and we happily said, “Grandma, you’re so WEIRD!”  She was mortified and a bit offended, til my mother explained, “in our family, being weird is a COMPLIMENT.”

Our daughter is overflowing with this magical, neverending waterfall of creative ideas.  She grabs paper and tape and makes shoes, or helmets, or tails, or spaceships, or her own paper zoo, complete with three-dimensional animals.  Her wheels are always turning, and as a person who constantly tries to keep up with all the creative ideas in my OWN head, it’s so amazing to witness and recognize in someone else.

Later, she added aliens in it, and told a little story about them.  That she had come to a new planet.  That there were aliens that looked like babies but that were adults.  They were blue.  One was in a spaceship, one was in love with her, and one said hi, as another peeked out of a crater.  Another showed off his invention of springy shoes and hands. 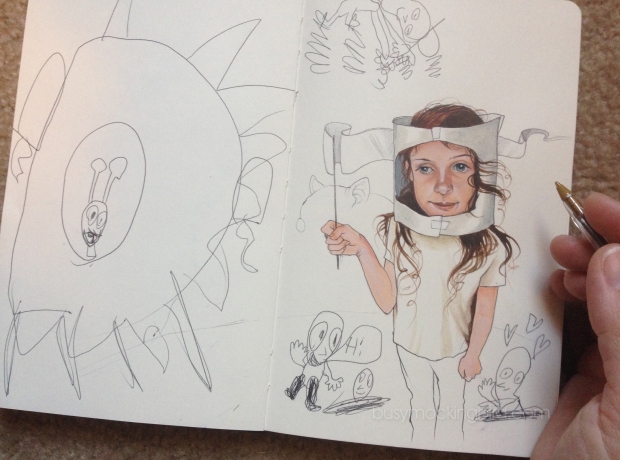 We talked about what I could add, and later I showed her my doodle, which instantly brought an “AWWW!” when she saw the cute little big-eyed mouse-elephant-tapir-alien things in the background. 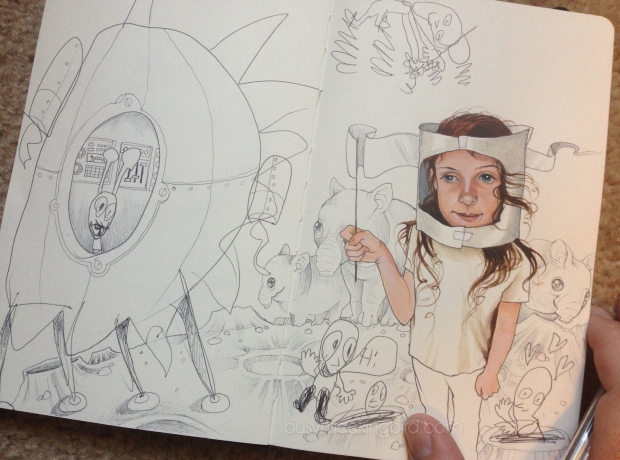 She gave me color suggestions, and asked me to please make sure I added a little light blue to the alien critters in the background.

One day during this process, she came home from a regular day at school saying,

“Mom, there was a kid at school that called me a weirdo.  I think they meant it in a bad way, but I just said ‘thank you.'”

I absolutely couldn’t have been prouder.  She didn’t get her feelings hurt.  She didn’t say something mean back to be spiteful.  She just happily said “thank you,” which was wonderful.  I have been trying her whole life so far to prepare her for the cruelness of other people, even way back when she loved Batman and the other kids tried to tell her that “only boys played with superheroes.”

Listen, I get it…she likes weird things.  She likes bug and bats and dinosaurs and Batman.  She has a wild imagination and loves to pretend.  She knows about sci-fi, and I do my best to answer any question she might possibly have about ANYTHING, and try to explain it to her in a way she can easily understand.  Nothing is taboo (and believe me, she ASKS).  People are most likely going to call her a weirdo.  I’ve been expecting it, because I went through it myself firsthand.  So I’ve made it a mission to point out to her that the most creative people around her, the most wonderful people, the most artistic friends we have,  have ALL been called “weird” at some point or another.

“People are going to try to make you feel bad for being different.  But different is GOOD,”  I told her.  She caught on quickly, and added in her own words, “sometimes people will try to point you a certain way.  But instead of following their pointers, you can help CHANGE their pointers to point another way–the way YOU want to go.” 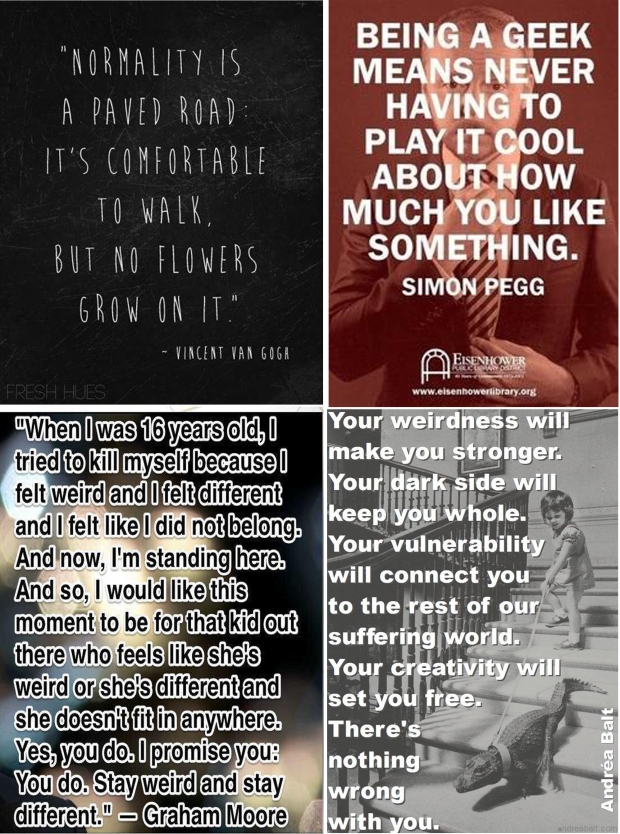 One day at the playground, inspired by “Secret of the Kells” (in which there was a girl character who was a shape-changing wolf-girl), she ran around to the other kids, saying “would you like to play werewolves with me?”  The kids looked at her strangely.  I’m sure their idea of “werewolf” was more the scary halloween type, and not the cute shape-shifting fairy girl-type.  I started to worry that she’d get discouraged and feel bad, but I let her handle it.  Cut to ten minutes later, though, and nearly EVERY KID on that playground was playing werewolves with her.  She had them all going in a den (under the slide) to rest, and then coming back out into the “trees” (the monkeybars) to run around in the wild, meet with the other wolf packs, and chase prey.  She wasn’t bossy or domineering.  She just helped them find their inner weirdos.

I looked at the drawing we did again, and I realized I had drawn her holding a little banner flag,which made me think of when people say they’re letting their freak flag fly, which seems totally appropriate.  Let your weirdo flag fly!

So I told her times might get rough sometimes, and people will try to hurt your feelings for being different, or make you feel bad, but you keep doing what you love doing, and you might even change someone else for the better.

And so far–thank GOODNESS–she’s gotten the message:  she’s a weirdo.  And so am I.  And maybe so are you.  And you know what?  That’s AWESOME.   Because all the best people are.