Ages ago, when I was buffer, younger, and not falling apart, I used to play roller derby and LOVED it (I still love it).  We lived in Alaska, I was on a team from North Pole, and I loved nothing more in my free time than being on my skates.

In derby, your best friend and derby partner is called your “derby wife,” and Jamie was mine (that’s me in the stripes and in the Captain America shirt, and Jamie in the NPBT team logo shirt that I designed)… Wonder Woman was our spirit animal, and we often paired up in our starry-bummed shorts.

(Ahhh, roller derby:  where having a booty is actually an asset…and ALL body types have very important roles!)

So when Jamie told me (from miles away, and several years later) that she had signed up for the coming NOLA Running of the Bulls this July 8th, and asked if I’d make her helmet, I said HECK YES.

If you’re not familiar, New Orleans has an event similar to the infamous bull run in Pamplona, Spain–except minus blood, maiming, and actual BULLS.  At the NOLA Bull Run, the “bulls” are all roller derby girls with horned helmets and plastic bats who skate around trying to bat-spank the runners, who all wear white shirts.  It’s kind of a big deal, and sounds like a heck of a lot of fun.

Jamie showed me some photos for inspiration, and the main images I kept in my sights were this headpiece from MetamorphQC on Etsy, and the filigree on Lady Gaga’s Countess’ glove from American Horror Story.  (You’ll see later that the end result looks nothing like either of these two, really, but that’s the great thing about inspiration–it inspires you to create your OWN thing…) 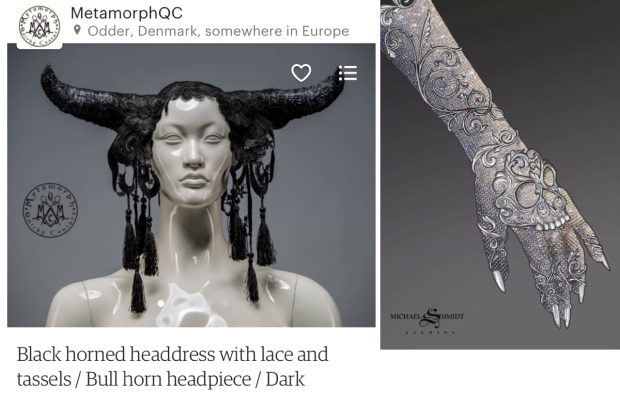 Jamie ordered the two main supplies and had them sent to my house.  They included a set of 3D-printed bull-horns from MudandMajesty, and a Triple 8 derby helmet from Amazon.

I was super ready to get started when the horns came!  I immediately dismantled them (so very sorry!!).  They were well-made–screwed into the headband they came with.  I unscrewed the horns from the headband, sanded them down a bit to fit the curve of the helmet, drilled holes in the helmet, and re-mounted the horns onto the helmet with screws, gluing them down for extra support. 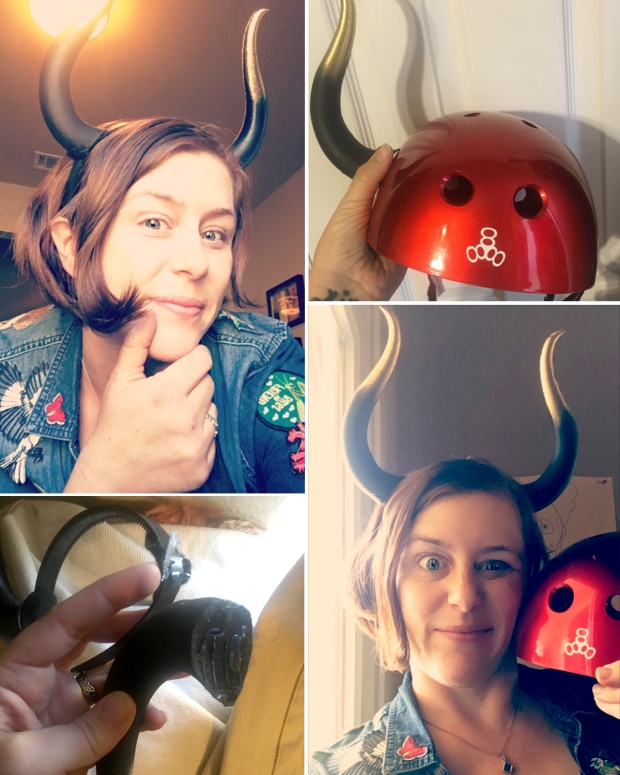 I made a trip to the craft store, grabbing several things I thought might work:  tassles from the upholstery section, strings of beads and flowered ribbon from the ribbon section, flowers from the wedding section…Anything that fit the look and feel I was going for from that first photo.

Granted, I probably should’ve done this part LAST, as I hadn’t painted the actual helmet yet, but I am a very impatient artist, and I do what I want.

Then, I just had fun painting!  I painted a snurfling bull with flourishes (similar to the one in the inspiration photos) and roses on one side, Jamie’s derby name on the other, and the NOLA bull run logo on the front. 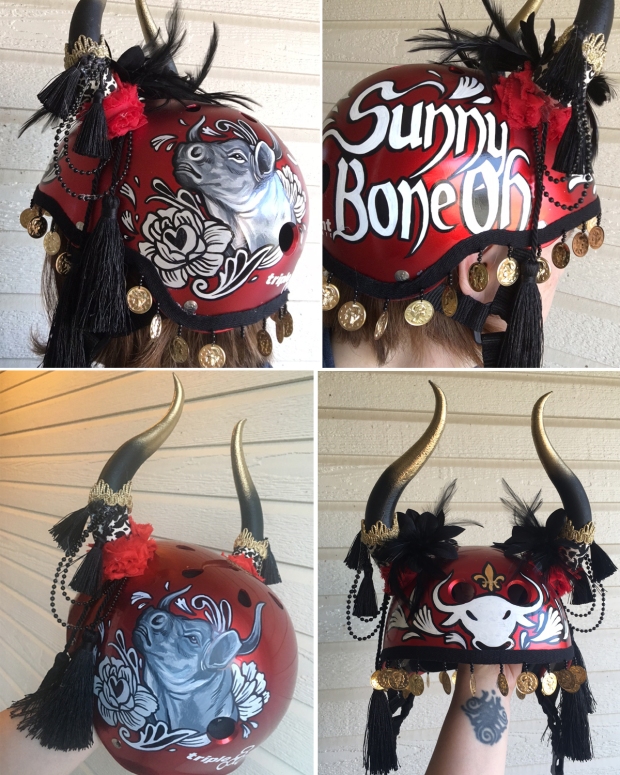 I was a bit worried it would be too much, but I think in this case, too much is GOOOOOOD.

So feeling finally finished, I carefully packaged it all up, crossed my fingers for luck that the postal gods would keep it in one piece–and mailed it to Jamie.  When she got it a few days later, I was excited to hear the squee through her text message, and she happily sent me some photos: 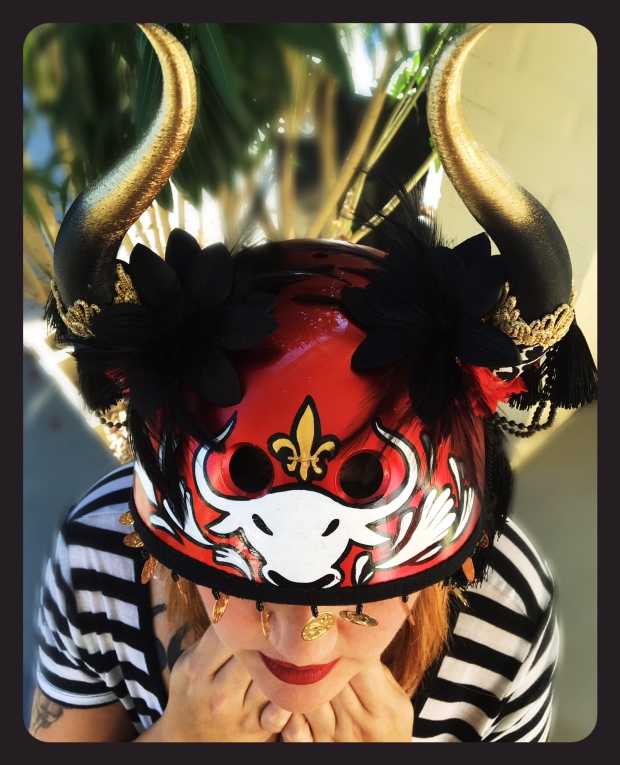 She already looks pretty darn cool in it–I can’t wait til she gets all fully decked out for the event.  I’m sure it’ll be awesome fun!

So if you happen to be anywhere near NOLA and aren’t hiding in your house from the bull run, keep an eye out for Jamie, smiling and skatin’ it up with the other bulls…. ❤ 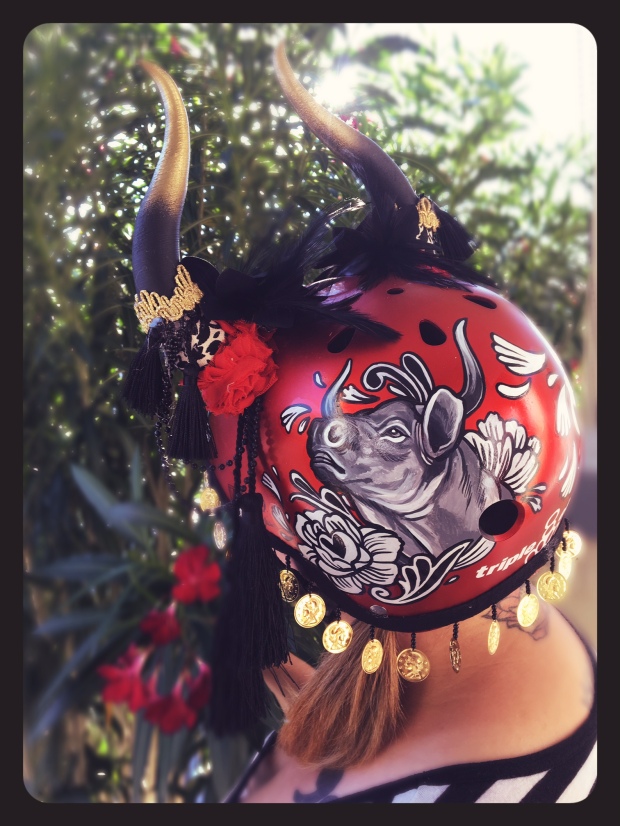 Finally customized this awesome little sculpt by @vitalmarks I got from Designer Con. 🌿