When Myla was two and her daddy was deployed, we used his R&R from Afghanistan to take a trip to Hawaii, where we were first married.   We decided to island-hop, since we knew the islands fairly well…but Hawaii with a toddler was much more difficult than we had anticipated.  We did our best to enjoy the islands while escorting (and attempting to entertain) a ferocious little toddler-dragon, ready to explode at any moment with the touch of a hand or a step up a stair.  She had been by my side constantly while he was gone, but for most of the trip she clung to Daddy, and suddenly wouldn’t come near me at ALL….until one very special moment that my husband magically caught on camera.  She finally let me pick her up and hold her, and I kissed her on her little dragon-nose as she put her arms around my neck.

…And then afterward, she promptly pushed me away.   As toddlers do.

Still, it remains one of our favorite photos…a sign of hard-earned affection and unconditional love.

So when CanvasOnTheCheap asked if I’d be interested in trying out one of their canvases, I finally decided on the magical photo of the special time when I dared to kiss a baby dragon on the nose. 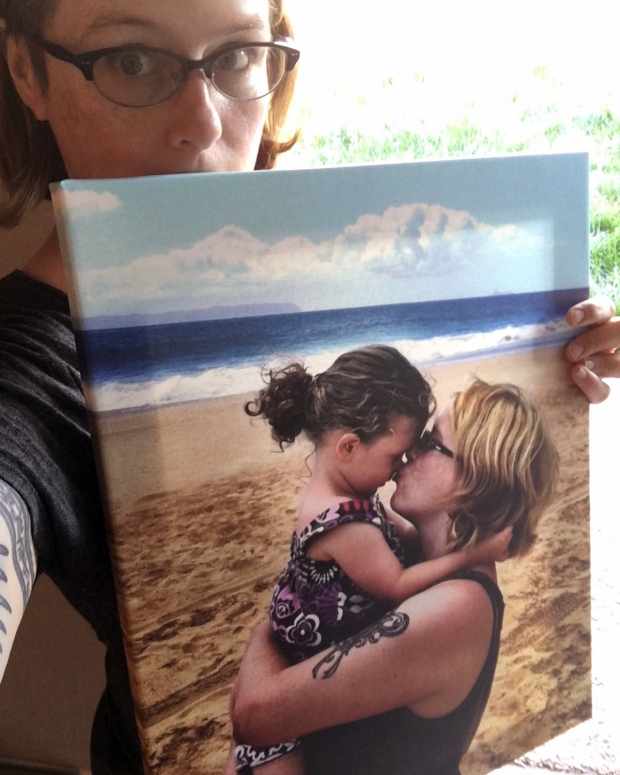 I get offers of things from time to time, and I often refuse them, but I was interested in giving this one a try–I had seen versions of these before, but when this one arrived (and it arrived VERY quickly after I ordered it), it was quite lovely. 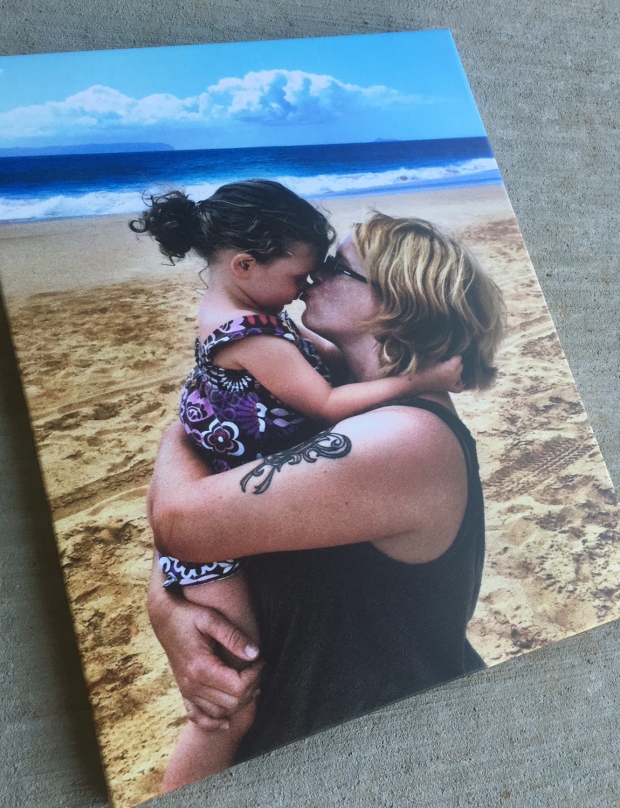 I chose the simplest options, and yet it came with a wall mount bracket, supported by an internal frame to keep its shape. 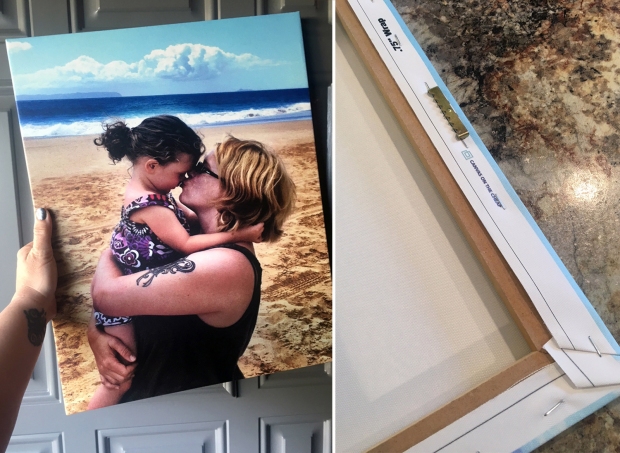 I debated on leaving it plain, as it was so lovely on its own, but leaving things plain just isn’t my style.  So after a little thought, I decided this one needed an Imaginary Friend.

I started by using a snarling fox reference, and freehanded a little furry girl behind us.  I was going for a “luck-dragon” sort of vibe, but with just a hint of the toddler-terror bubbling just below the surface.  I wanted her to be cranky, but not feral. 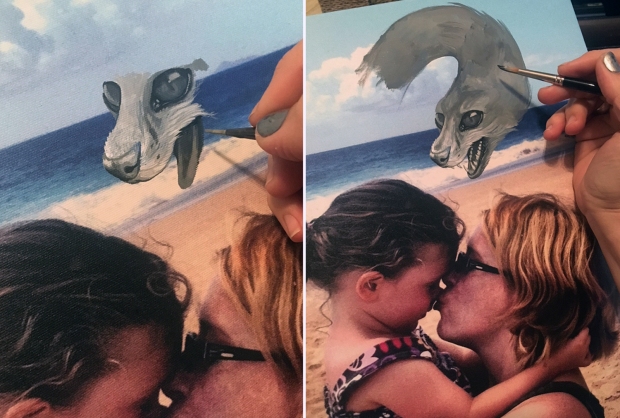 I used acrylic paints, and just brushed the basic shape down with some rough shading after I got a bit of detail in the face…  I went with plain greys and whites so as not to compete too much with the color of the canvas. 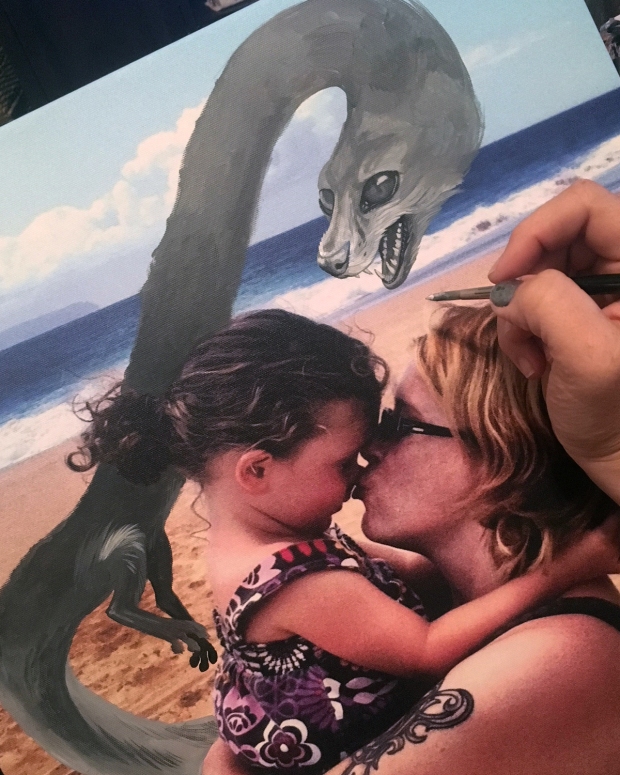 Painting wispy hairs is one of my favorite things to paint, and the more I added, the more personality and tension it seemed to give her. 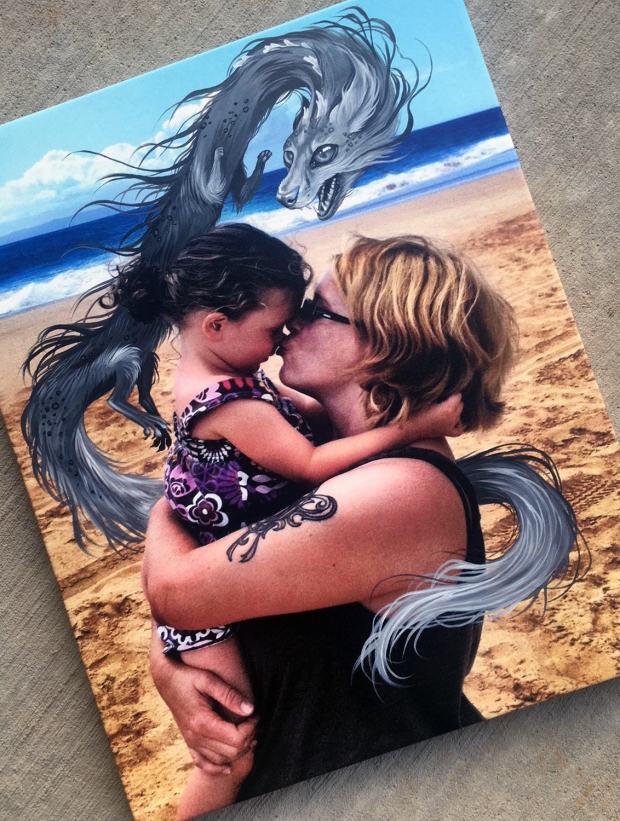 And there it is!  My lovely printed canvas from CanvasOnTheCheap, mixed in with an imaginary dragon.  And it makes me smile.

The great thing, is that they gave me a canvas offer to give away for FREE!  So–if it’s your thing–head over to my Instagram page, where I have instructions for how to enter the giveaway of a CanvasOnTheCheap photo of your choice on the post of this photo.   We’ll choose the winner from that post, so if you’d like to enter, be sure to enter there!  I may let Myla pick the winner by random…because she WAS the baby dragon, after all…. 🙂

On a side note: it’s been a while since I’ve posted!  We’ve had some big life changes–my day job as a distance graphic artist has advanced into an in-office Marketing / Graphics position, and we moved up to Missouri to be there for it.  I’ll still post here, but only when I can, when it doesn’t feel too stressful.  It’s a big change for sure, but it feels like a good thing.  Maybe not a “finally kissing a baby dragon on the nose” good, but very good nonetheless.  🙂