The Fisher King and the Man in the Moon 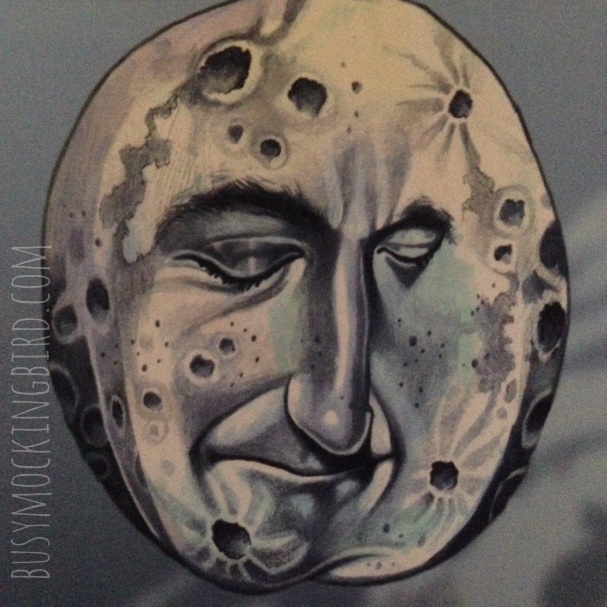 I’m not usually too affected by celebrity news, but I’ve been having a bit of a hard time with this one.   My WHOLE life, his movies, tv shows, and comedy has been there, in so many wonderful characters, in so many wonderful ways.  From when I first saw him as Mork as a kid, to now.  He inspired me, he made me laugh.  He touched so many people with the simplest of expressions.  He could make you laugh in one moment, and melt your heart in the next.  I don’t know another comedian who could do that.  He’s just always been there. 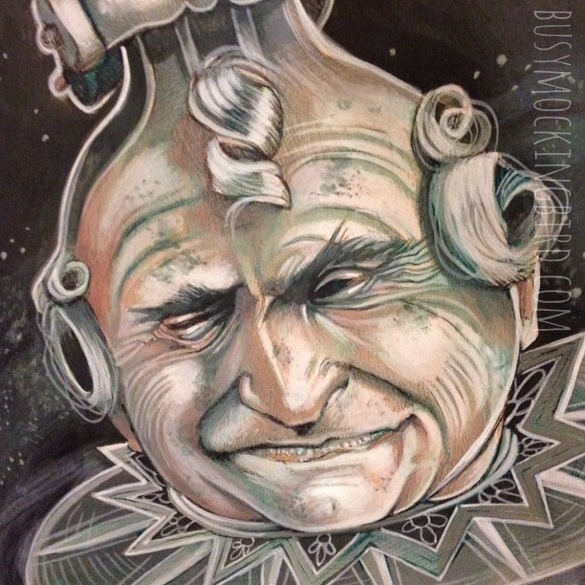 The point is that someone, no matter who it was, touched our lives and it’s okay to feel sad about that.  It’s a testament to me that peoples’ lives, big or small, affect all of us in some way, even if we never know it.  We feel the loss of someone when they have touched us in some way.  We feel worse when someone’s story, someone’s life, has reflected something in our own lives.

To me, it’s also a testament to that saying that you should “be kind always, for everyone is fighting a great battle.”  That person who was a total jerk?  Maybe they’re going through something difficult right now.

Like many people, I struggled with depression when I was in my twenties.  Recently, my mom and dad were cleaning their shed and found an old self-portrait I did at the time.  It’s not at all flattering.  I didn’t want it to be.  I wanted to show how worn out, how sick of it all, how emotionally EXHAUSTED I was. 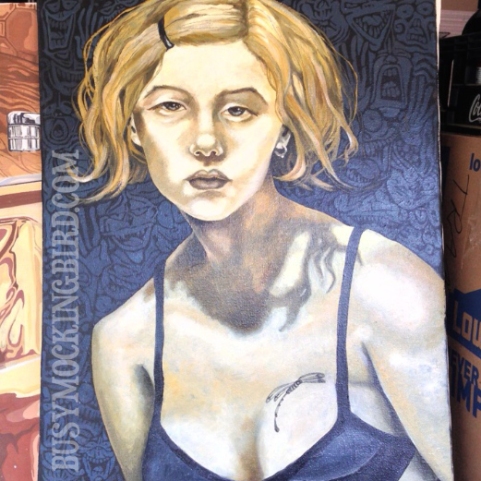 Thank goodness I don’t feel that way anymore, and looking back on it, it’s like looking at a completely different person that I can’t even relate to anymore.

Do you remember The Fisher King?  (It’s one of my VERY favorites of all time.  To me, every Gilliam movie is amazing, but Gilliam with Robin Williams was magical.)  Do you remember how the shock jock’s flippantly insensitive words inadvertently set off a chain of events that damaged the life of William’s character, who he had never even met?  People are important.  Especially in a world where it’s so easy to type a few errant nasty words on someone’s post, the things you SAY are important, whether you know it or not. 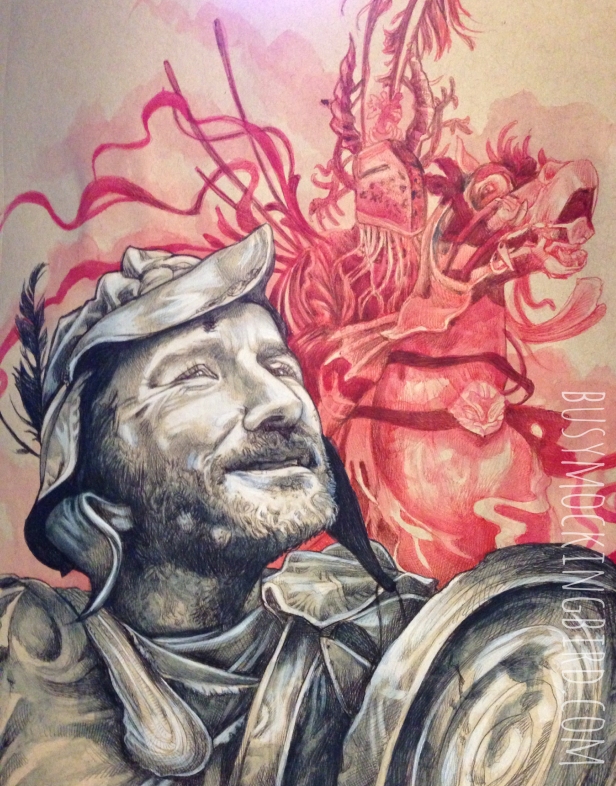 And I think aside from just missing his magic, that might be what has affected me so greatly about his suicide, and the internet reaction to it.  It’s just reminded me to do my best to ignore people that build themselves up by making “superior” comments or make a point to spread negativity, and remember how important it is to connect with the people in your life, and to spread the positive around a bit.  If you surround yourself by that negativity in people, it eats into you, it brings more negativity to you, draws it in like a magnet.  That negativity they focus on pulls you down with it.  And as much as you might sympathize with them or want to help them, sometimes you just have to step away a bit.

And this new news about the onset of Parkinson’s…in a weird way that made me understand a little better.  I’ve lived with chronic pain for over 10 years, and the idea that you eventually might not be able to do certain things the more something progresses is an absolutely terrifying one.  Not one worth my dying over, but I get it.  I get that pain.

No, I didn’t know him.  And knowing him wouldn’t have changed anything.  But I know other people in my own life, and maybe connecting with them will help in some small way.

So it doesn’t matter if he’s a celebrity.  He touched peoples’ lives.  Don’t feel ashamed for mourning him when so many others need attention, too.  Not grieving for one person doesn’t show more appreciation for another.

Instead, appreciate the people in your life.  You MEAN something to them.  They mean something to YOU.  Even if you don’t see it, don’t know it, don’t FEEL it….I promise you, you do.

Sometimes you just have to look a little harder for it. 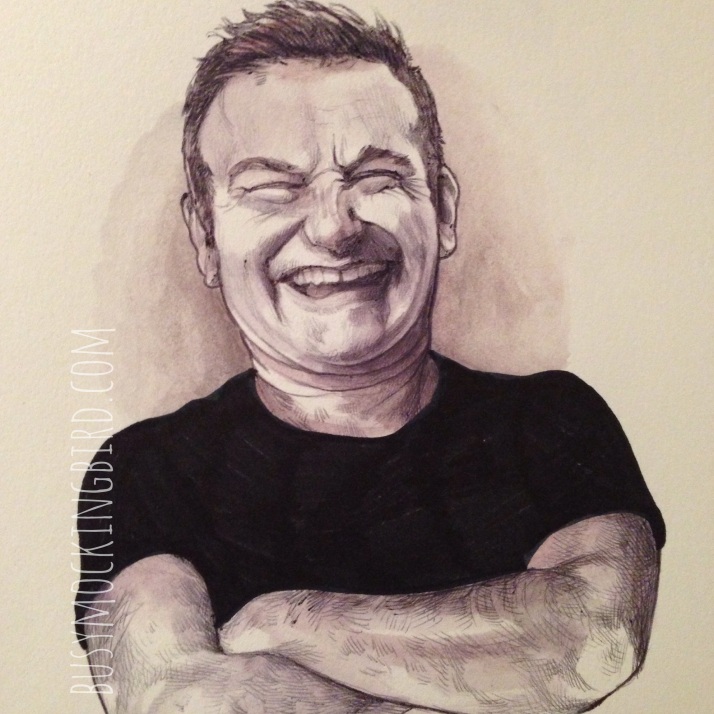 I grew up on science fiction.  My dad was a big sci-fi fan, so when we’d go to the video store (yes, I understand that’s an ancient concept these days), he’d choose anything so long as the cover had space, spaceships, or aliens on it.

I remember seeing Star Wars when I was younger, and collecting figurines and spaceships.  Alongside the wooden playhouse my mom designed for us in the backyard of our little house in Oklahoma, my dad built what was meant to be the head of AT-AT.

I remember staying at home with a sitter while my parents saw what they thought was a grownup movie about aliens, only to take my sister and I out the very next night when they realized how good (and kid-appropriate) E.T. was.

I remember one of the very first “grown up” movies I saw was Blade Runner.  I was blown away.

So I think it’s fair to say that me & sci-fi go way back.  Which is why of COURSE I loved Guardians of the Galaxy.  I’m not going to review it, or go into in-depth conversations about how it relates to the comics (which I have not read, and don’t really intend to), but it was a fun little movie, and I enjoyed watching it.

What makes a sci-fi movie “real” for me is the characters.  I love them, humor, flaws and all.  GotG had some great ones, and nearly ALL of them interesting-looking enough to draw (which is why my IG feed has been flooded with all sorts of amazing character sketches from various artists).  For me, GotG has a similar campy feel as Fifth Element did, with a sense of humor, and a lot of colorful characters.

(Don’t worry, I don’t think I’ve got any spoilers here…)

I tend to start off on the beaten path, so one of my favorite characters was Drax the Destroyer, played by WCW’s Dave Bautista (who was so good I forgot he was an athlete-turned-actor).  Drax is extremely literal (as am I).  I could totally relate to him, as a lifetime of literal misunderstandings have made my own life a bit confusing.   He has one of my favorite lines in the movie, saying “Nothing goes over my head.  My reflexes are too fast.  I would catch it.”  I had to get my blue & red ballpoints out and sketch him. 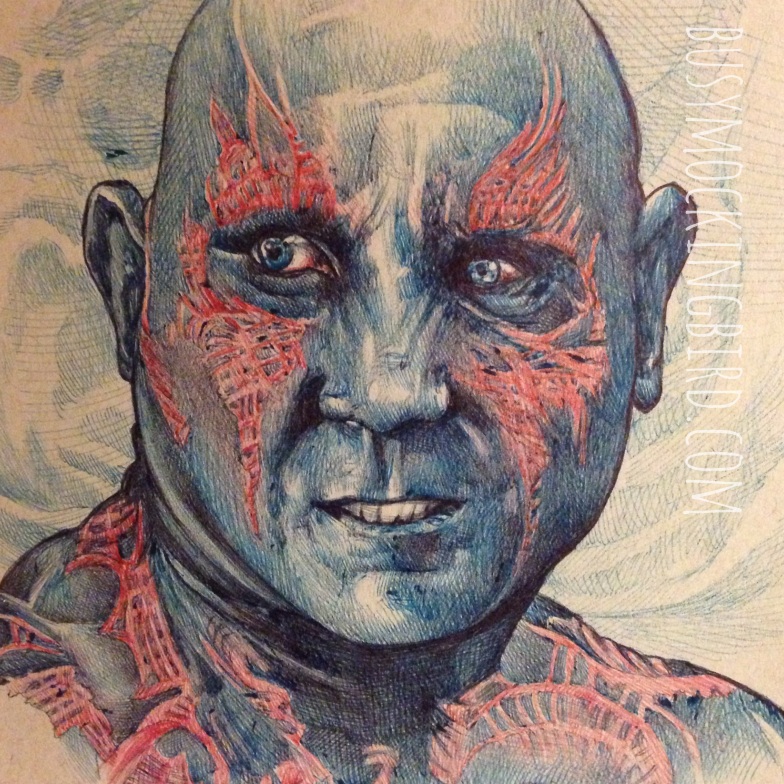 Later, I sketched the character named Yondu (played by Walking Dead’s Michael Rooker) who controls a deadly arrow with his whistles.  This one I sketched in ballpoints, and highlighted with acrylics, and I’d just like to say that it was QUITE hard to draw a person whistling.  Just sayin’. 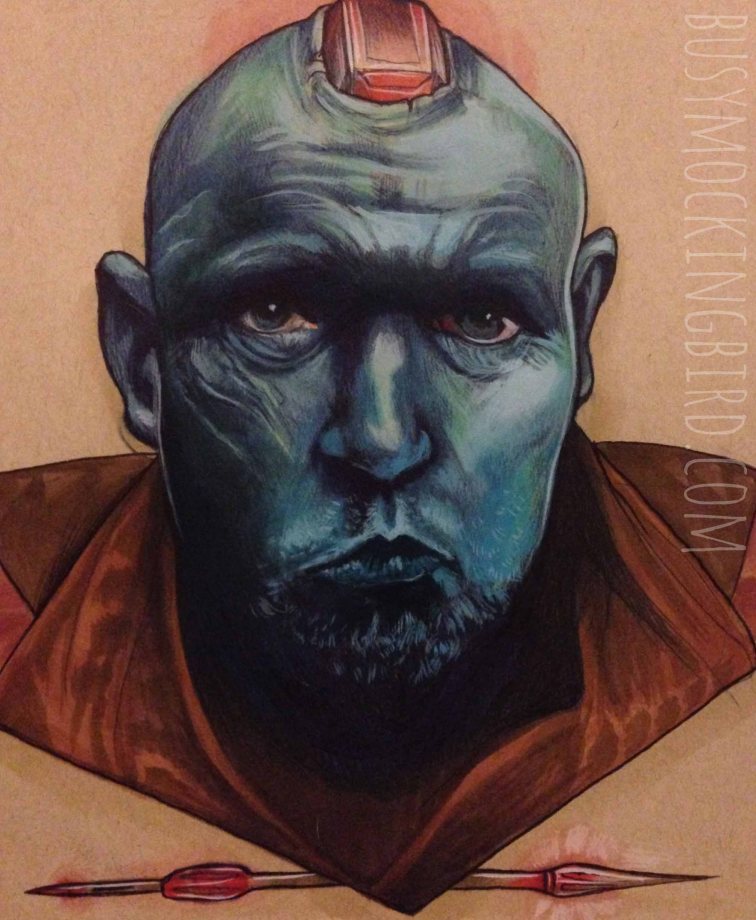 I have a couple of characters I’d still like to draw if I don’t run out of steam…like Gamora (Zoe Saldana) and everyone’s beloved Groot.  I’m trying not to get overwhelmed by the plethora of inspirational imagery in that movie, so I think a couple more drawings and I’ll be okay.

Guardians of the Galaxy is rated PG-13, so I know a lot of kids went to see it, but aside from the fact that Myla is only five, heavy action understandably frightens her.  Sometimes that can be a little challenging, trying to find kid’s shows that have no “bad guys,” and where no one gets hurt and there’s no conflict whatsoever, but I’m also quite okay with her enjoying the simpler things.

So when there are shows that come out where the marketing and products are EVERYWHERE, or other kids are talking about it, I like to tell her the simplified version.  Instead of telling her the entire story of GotG, I tell her about the characters, so she still knows what everyone’s talking about, but doesn’t have to actually see the “scary show” herself.  And in my doing so, she has developed a love for characters she’d never otherwise see: like Khaleesi, Daleks, and in this case, Rocket and Groot–as has most of the sci-fi world.  I show her little video clips of the characters on YouTube sometimes, she asks me questions, and she loves ’em.

So the next time she asked to draw on some heads (as we do), she immediately turned one into Groot, complete with a little leaf on his shoulder. 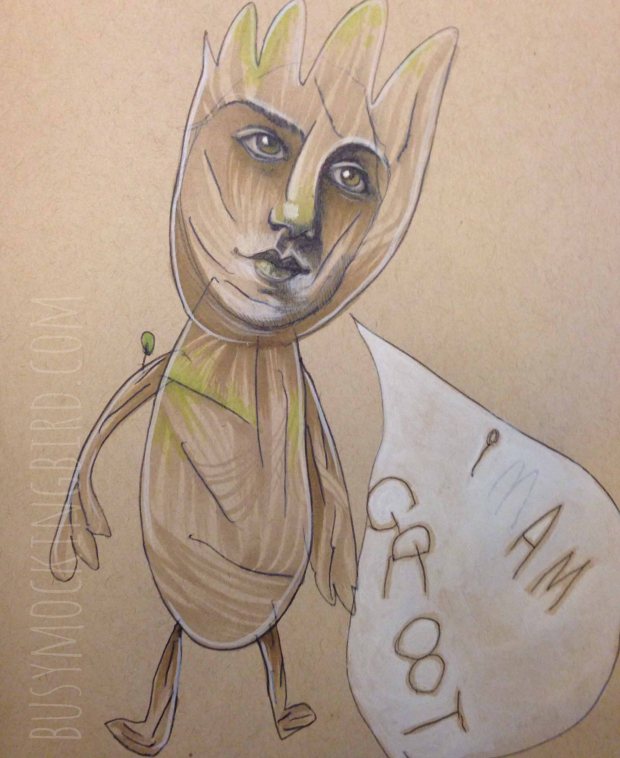 And seeing Rocket in stores out & about, she asked lots of questions about this little raccoon character.  She thought it’d be funny if he had bubbles coming from his gun instead of bullets… 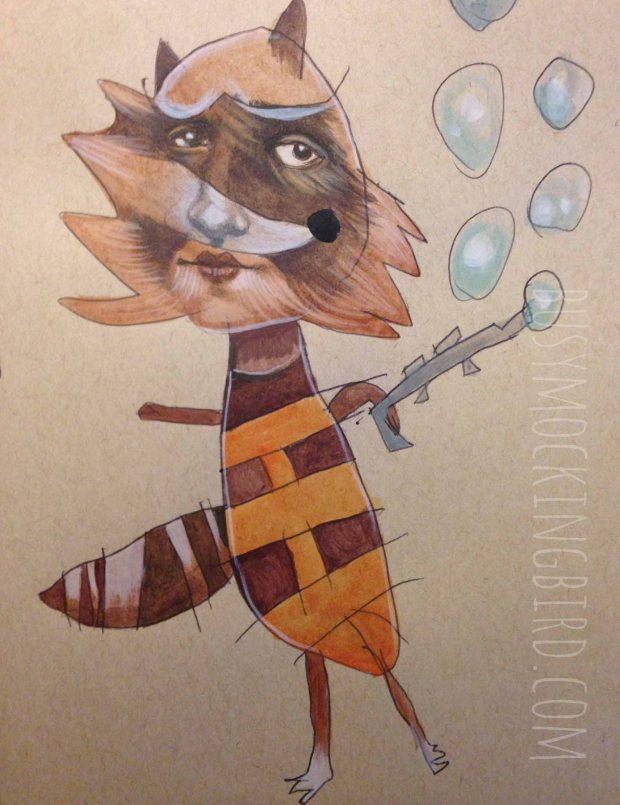 So there ya go.  Nothing like a little sci-fi influence for your day!