So Austin Wizard World happened this past weekend, and I thought I’d tell you all about my very first ever Con experience as both a vendor and an attendee…

First off, the fact that the event started on a Thursday was apparently unusual, and had quite a few vendors and staff in a huff.  The event also coincided with a football game that same weekend, but it being my first time at all, I didn’t have much to compare it to.

My awesome sister was nice enough to loan me her teenage daughter to help me with the event, so we flew her from Maryland.  At 17, Maylin is no stranger to conventions, and loves the art of cosplay (dressing up as beloved characters).

My neice Maylin as Moriarity from Sherlock

Maylin helped me set up the table and watch it so I could walk around a bit, too.  It was awesome having her there!  She did get some funny looks, though, when I wasn’t manning the booth.  “Yeah, right, this teenage kid has a 4-year old?!??  It must be a HOAX!”  Heheh.  Myla had school Thursday and Friday, and three days of a 5-year old sitting at a booth would be a little much.

So many people walked by and recognized the artwork, and said very nice things about it.  We got a lot of  “I feel like I’ve seen this online somewhere….” and “Oh!  are you the lady??”  It’s a testament to how unreal online things  seem, as I got several people saying, “Oh, this is actually REAL??  Are you the real PERSON??”  Uh.  Yes?  Yes, I am.

One of my favorite parts of the convention was just people-watching.  SO many fun and clever costumes!!  There was a group of four girls, all dressed as different versions of Wolverine.  They could barely walk a few feet at a time before having to stop to get their pictures taken by everyone, and made everyone smile who saw them.  There was a cute Toothless, a teeny tiny (and very realistic) Predator.  I saw lots of cool Gamoras and Starlords, a few Rocket Raccoons, and even a Groot made from foam noodles. 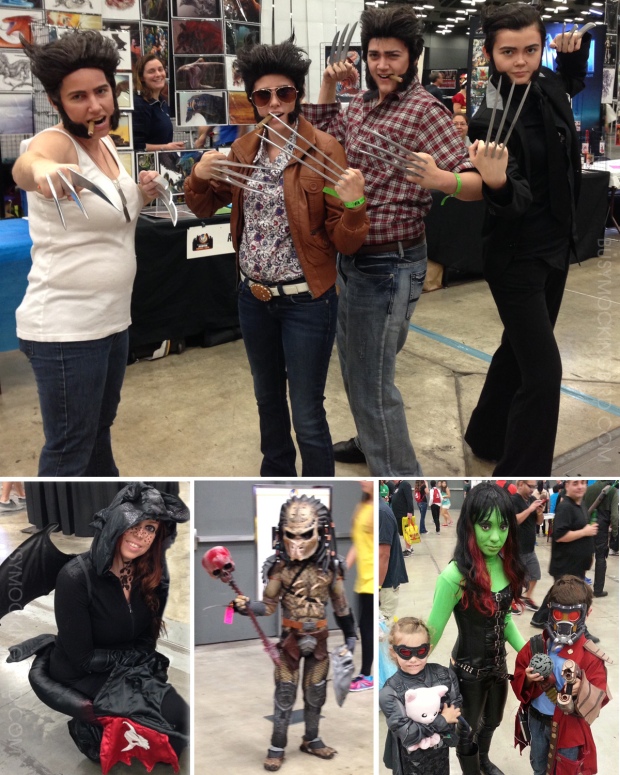 This Phoenix cosplayer had a pair of giant foam wings attached to her back, and she was getting stopped every few minutes to have her picture taken.  One of my favorites was a simple costume worn by a very tall woman shopping with her daughters.  Green skin and hair, light purple shirt, and brown dress, carrying a 1-ton handbag….LADY HULK! 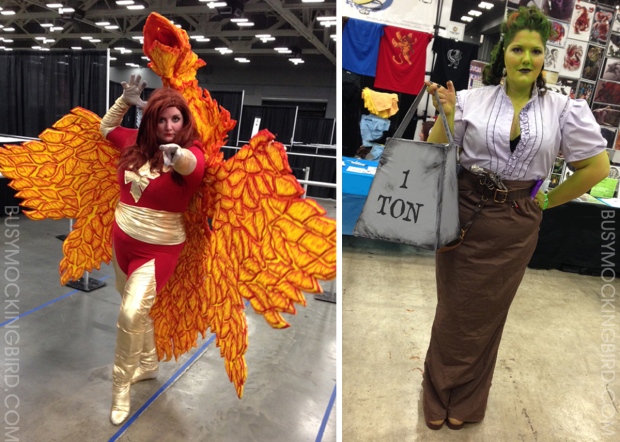 Saturday, Myla begged us to come too, so she pulled out her Falcon costume (from Captain America) and was so excited to see everyone all dressed up.

Another cool chance happening was that while sitting at the booth, this Punisher came up to us and it took me just a second glance to realize it was my very own cousin Andrew!  I had no idea he was coming, and he had no idea I’d be there.  Small world!  He and his girlfriend Bea cosplay all over Texas, and she came as a variety of characters all three days..Catherine from The Cell, Catwoman, and Lady Deadpool–go check her out at Ninja Kitty Cosplay! 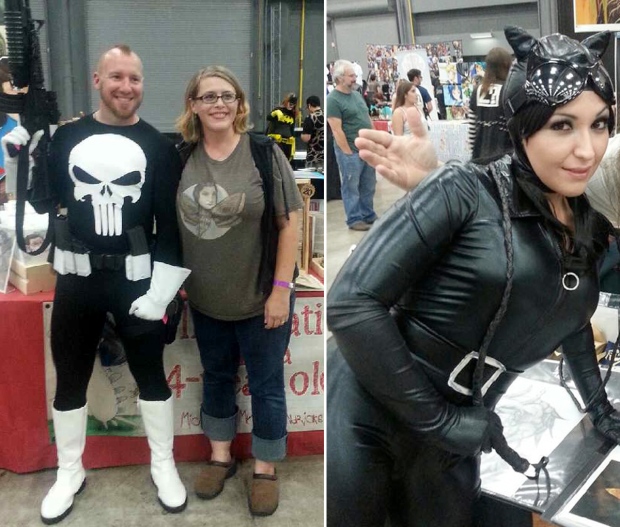 They even walked around a bit with Myla and let people take their picture, which made her feel a bit like a superstar.

It was also amazing to meet all the other artists and vendors that worked there, and talk to them about their ideas and projects.  I listened to artist Doug Hazlewood talk about making comics the old-school way.  We were seated next to the creators of The Cat webseries on YouTube.  I talked to artist Brian Essig-Peppard about his project Zeroes for Hire.  SOOO many good artists!  And it’s really cool to know that people you’ve gotten to know online through their artwork are really nice people in real life.

For example, I first followed artist  John Mueller on Instagram  because he makes AWESOME artwork, and also because I remember seeing his comic Oink way back when I was in art school.  He’s revamped that series, and he actually asked me (and a few other handpicked artists) if I’d do a piece of artwork for the back of his new Dark Horse comic Oink: Heaven’s Butcher, which comes out in February.  (I just finished it & sent it, and I’m SUPER honored to be included!)

Anyway, John was at the Con with Sam Gage to promote their awesome game called Bedlam, via Kickstarter, with some cool rewards!  At some of the higher tiers, you can even get YOURSELF drawn in as a character in the game!!  These guys were lots of fun, made beautiful artwork, and were just all around awesome people.  (If games are your thing, I know they’d certainly appreciate a like, a pledge, or a share!) 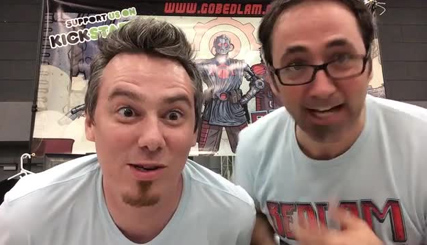 They were also REAAALLLY big fans of our collaborations, and really made Myla feel special when we went walking around.

Speaking of feeling special, we had a special visit from a facebook friend, Lauren, who (joined by her Tribble) brought her copy of our book to have us sign!  Luckily she came on Saturday when Myla was there, and Myla not only signed it, but drew an octo-cat inside.  It was so wonderful to meet her! 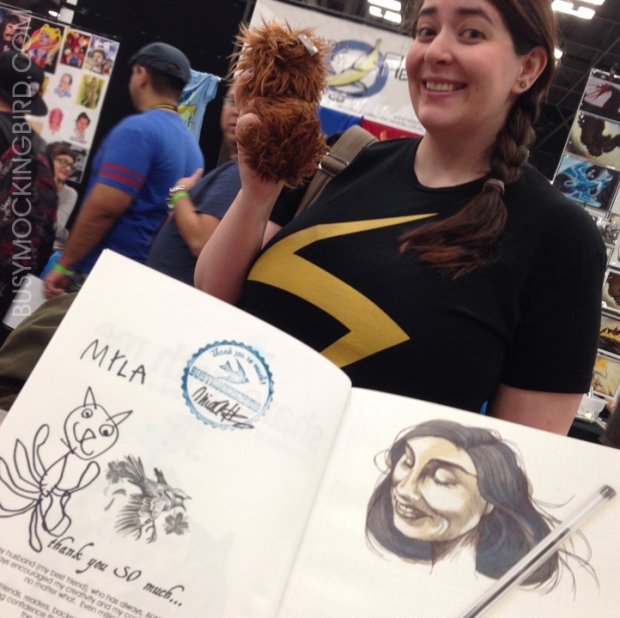 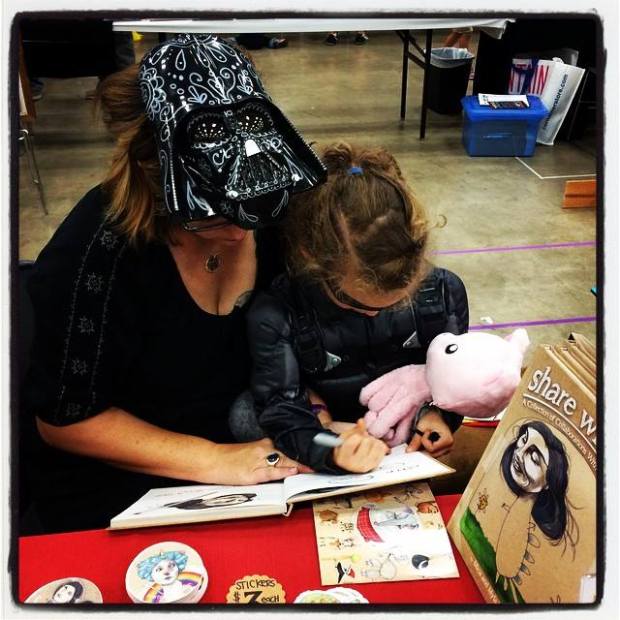 I even met up with a friend from high school, and his family!  (High school, by the way, was in Augsburg, Germany…so again, small world!)

Another fun run-in was spotting tattoo artist and sideshow performer Katzen Hobbes.  I mean, she’s pretty difficult to miss, right?  I ran into Katzen YEARS ago from a distance at a tattoo convention, and always read about her, so it was cool to finally meet her in person.  She’s going to be featured in Ripley’s Believe it or Not book, coming in September.  She was really nice, and told me she did art with her son Felix from time to time, and that she had heard of our artwork and enjoyed it, and that since she was an artist and a mom, people would send her the article.

Since I’m a bit on the…”grownup” side, I wouldn’t consider myself much of a fangirl, so when the list of celebrities came out for the show, I didn’t think I’d be interested much.  …UNTIL the thought crossed my mind that I might get them to sign some portraits I had done of them…

You might know Michael Rooker as Merle from The Walking Dead and Yondu from Guardians of the Galaxy…I brought my portrait of him to pose for a photo with, and had him sign the other, which was just an unfinished ballpoint sketch at the time.  He was friendly!   Like, VERY friendly.  Like, country boy, holding your hand, callin’ you “Sugar,” big-hug friendly.  “You did this, girl?  Man, you’ve got some skills!  All with a ballpoint pen, huh?  I’ll be darned.”  It was on Thursday, so there was hardly anyone there.   I asked him if anyone offers him chocolate covered pretzels.  We talked about Mallrats, and having to have his shiny butt full screen for the whole world to see in that one.  He was funny.  Later on, he walked around the Con floor, chatting with vendors.  “HEYYYYY it’s you again!” he said to me.  “You still working on that drawing?  Man!  You’re fast!”  And then he strolled off to chat with a scantily-clad Red Sonja.

Friday was Norman Reedus, from Walking Dead.  Since there were separate lines (and costs) for autographs and photos, I wasn’t able to take a posed photo, but Norman was super nice.  Everyone kept saying, “oh, Norman Reedus?  He is SUCH a nice dude.”  And they were absolutely right.  While Saturday was full of teenage fangirls screaming and shrieking his name, Friday was much more laid-back.  As I walked up, he gave me a hug, shook my hand and said, “Hi, I’m Norman.”  I asked if he’d be willing to sign my drawing, and he said, “MAN, you did that??”  He stared at it a bit and told me I had a very unique style.  I told him I was an illustrator, that my husband & I loved the show, and couldn’t think of anything else much to say.  I know he enjoys artwork, and even made a book of fan art, but I wish I would’ve known beforehand that he actually MADE art at one time–that’s actually something I would’ve LOVED to have learned more about…..DANG IT!

Anyway, Myla stayed for a good chunk of the day Saturday, and had a GREAT time.  She LOVED seeing all the costumes, and she LOVED looking at all the artwork.  She said she wanted to stay there for the WHOLE NIGHT.  She seemed SO at home there!  At one point, inspired by the allure of commerce (or maybe it was the influence of the other artists), Myla drew some pictures, and laid them out on the floor.  “I hope someone will buy my artwork,” she said.  I helped her spell the words “For Sale” on her sign.  “How much will you sell them for?” I asked.  “One hundred,” she replied confidently.  “I think that might be a little too much.  How about one dollar?”  “Yes! Of course!” she said.  So from then on out (after first trying to sell some to me and Maylin), she would ask people kindly, “Would you like to buy some of my art?”  I worried that she might not handle rejection well….but I underestimated the power of a kid’s selling techniques.  I mean, who could resist?

One guy came by specifically to meet her, and tell her what a fan he was of our work.  When she offered up her drawings, he asked if she had any of Harley Quinn.  She didn’t, but grabbed her markers and drew him one right then & there.  He happily thanked her with a ten dollar bill and a smile (people can be SO awesome, by the way).  Made my heart smile! 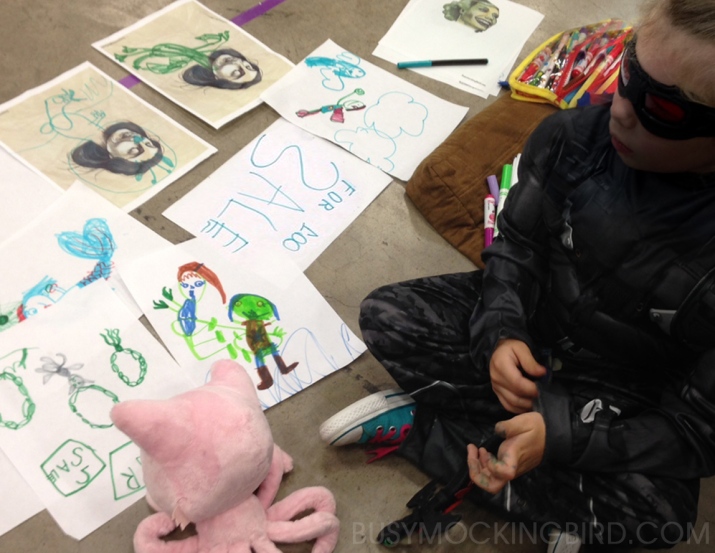 By the end of the day, when Daddy came to pick her up, she had made $20.  She told me I should go to the shops and buy any doll I choose.  Whichever one I wanted for myself.  “Hm,” I said.  “What doll do you think I should choose?”  Immediately, she answered, “FLUTTERSHY!!!”   Then quickly added, “Uh…or whichever one you would like.”

So of course, impressed by her moxie, I brought home a stuffed Fluttershy for her, for all her hard work.

And that was that!  So much fun meeting so many people, seeing so much artwork, and all the fantastic costumes.  I think we may have to go to a few more, even just as attendees.  Maybe this time…in costume!  I have all these awesome cosplay ideas if Myla would only cooperate, but of course (as she should) she has her own ideas.  Like being Fluttershy or Rainbow Dash (can you tell she just discovered My Little Ponies?).   My husband says that instead of a pageant mom, I have to be careful not to become a cosplay mom.  🙂

Til next time!  Woohoo!