Oh my gosh, we just discovered a new show.  And in kid-world, anything that keeps the same goshdarn show (whichever it might be) from being on repeat over and over again is definitely something to celebrate…

We have Amazon TV, and they just released a series called “Creative Galaxy,” about art and creativity for kids.  I’d love to say that they gave us money to blog about them, or at least a stuffed animal or a visit from a character or something, but they didn’t, so this is all our own experience.

So Creative Galaxy is about a little alien named Arty (of course), and his sidekick Epiphany (which, I told Myla, means “a good idea”), and they go around the galaxy “solving problems with art.”  Okay, it’s just as perky as any typical kid’s show, but the cool thing about Creative Galaxy is that they introduce the style of certain artists (sort of like I’ve done with Myla with our own projects   in the past), and explain what the artist was trying to do with their art.  They talk about Pollock and his “action painting.”  And they have lots of clips of real kids showing how to do simple fun crafty projects.

The only down side to this show in OUR house is that it gives Myla a million crafty ideas that she wants to try ALL RIGHT NOW!  But that’s okay.  We pick and choose, and then we get crafty.

Recently, I expanded Myla’s craft area, since it had started completely taking over both the living room and kitchen tables.  We used things we already had around the house, and now it’s easily accessible to her, and right next to my office area (since I work from home on my computer).  She loves that there is enough space to sit on top (she REALLY gets into her artwork!)  so we don’t even need space for a chair.  There are office organizers for her pens and paper, as well as the bins next to it for other craft supplies like paper plates, foam, stickers, and paper bags.  Perfect for all sorts of craft time!

There’s nothing more that Myla likes than a stuffed animal.  I think she may actually be addicted.  I may have to look for some sort of help center for wayward stuffed animal addicts, actually.   So inspired by the show, Myla decided one day that she wanted to make her own “Epiphany” doll.

Epiphany is Arty the alien’s little sidekick.  We’re not sure what he…or she…really is, exactly, but Myla thinks he’s cute.  She started by drawing the shape onto a piece of felt.  Since she wanted it to be stuffed, I showed her that she had to have a front and a back piece.  Then she cut little arms & legs out.  I had her help me sew a simple stitch around it on the sewing machine (I often have her put her hand on it to help guide it), and then came her favorite part:  the stuffing!

When we do spontaneous projects like this, the rule is that we have to use things we already have, or we can’t do it at all.  I happened to have some little pompoms on a string, which were a bit wonky, but worked well for the little puffball on his head.  Thankfully (despite being a perfectionist) she seemed to like it just fine.  It bothered me a little, but I always let her have the last word on when it’s “done.” 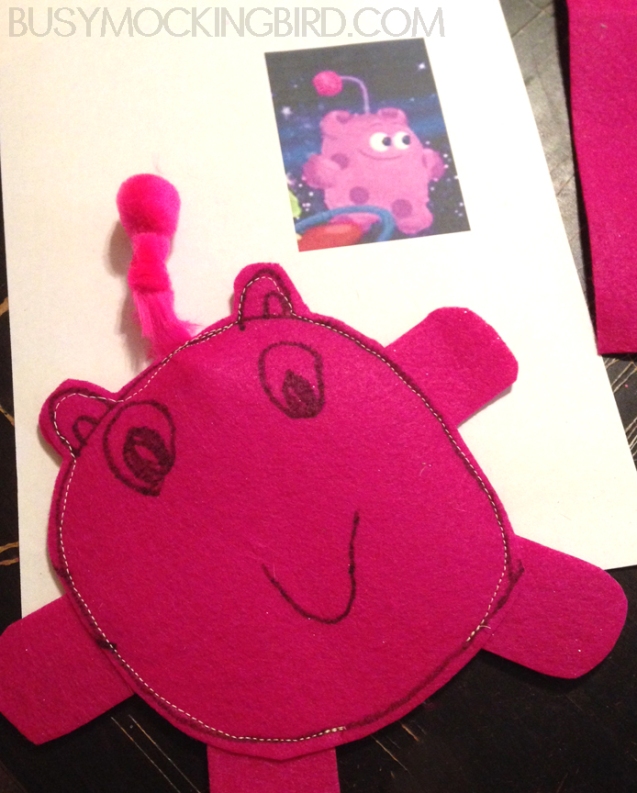 She wanted him to look a little more like the photo, so we got the paints out to color the eyes and spots.

And there he is, the final little Epiphany character!  Created (almost) entirely by a 5-year old! 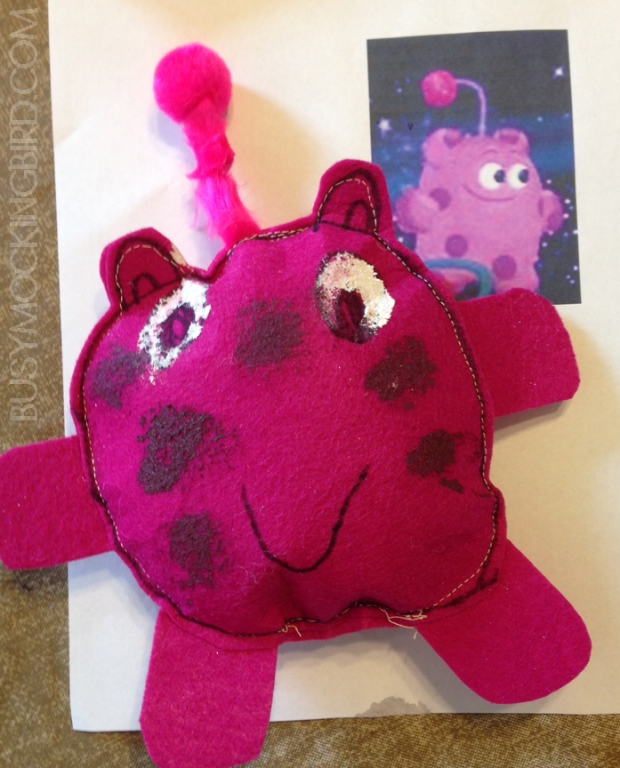 Sure he’s a little wonky and imperfect.  But the fact that she made him (almost) all by herself is something she’s VERY proud of.    There are some times that the final piece doesn’t look like how she imagined and a wailing pitiful freakout ensues (we’re working on that), but I think it’s good for her to see the outcome of her decisions, whatever they may be. Simple decisions, when she can make them, make her feel more involved, like she had some sort of say in what we’ve created, and makes her more emotionally invested in it.  Sure, I could’ve made her a doll, but would she learn how it was made?  No.  She’d just get the benefit without the effort.

I don’t always indulge her in dollmaking–actually I often steer clear of it, or we’d end up making a dozen dolls a day.  But on occasion, and with some boundaries, it’s fun to see where her creativity takes her!