By busymockingbird on September 22, 2014

In my ongoing experiments with sculpting, molding, and resin casting (like this one), I wanted to try out a more functional use for resin casts….Could I maybe make some kind of doll with a resin-cast face?

After a few rough sketches, I got some Sculpey out on an index card, pushed marbles in for eyes, and played around to see what I could come up with.  Of course, since Myla loves to be involved, I let her have a lump, with which she made the little figure on the top left, and I came up with these two monster faces on the right (people on Instagram said they looked like monster kittens): 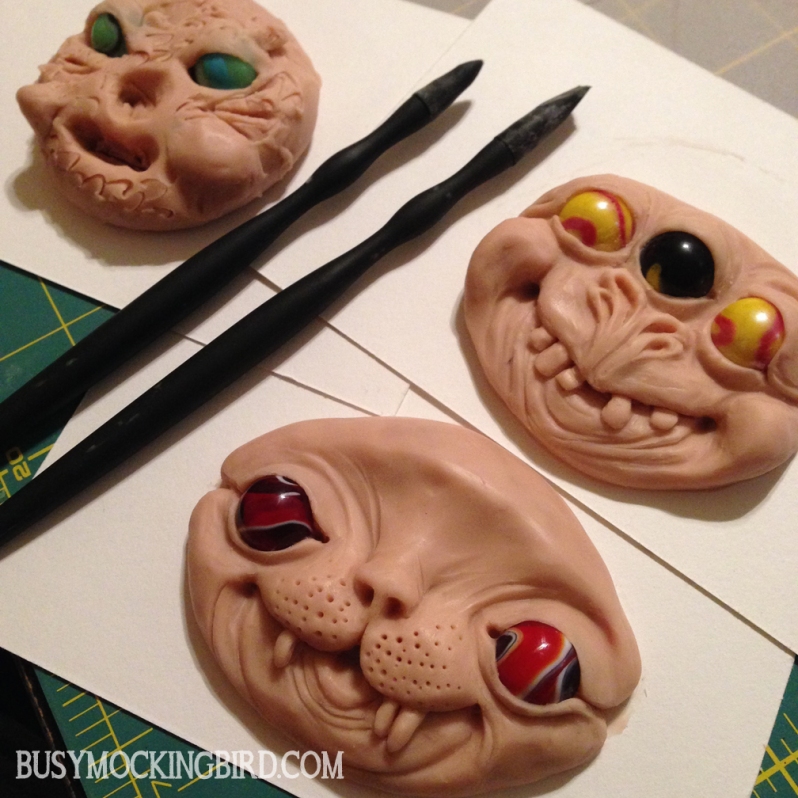 I still have some tricky times with molding and casting, and have wasted more than my fair share of molding rubber and resin…So I let Myla have a few of the wonky ones to paint herself… 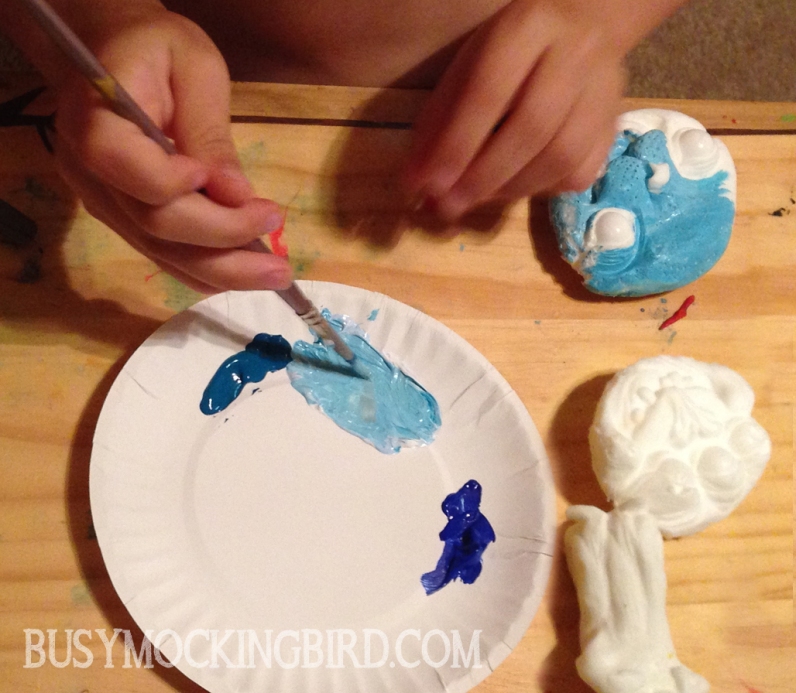 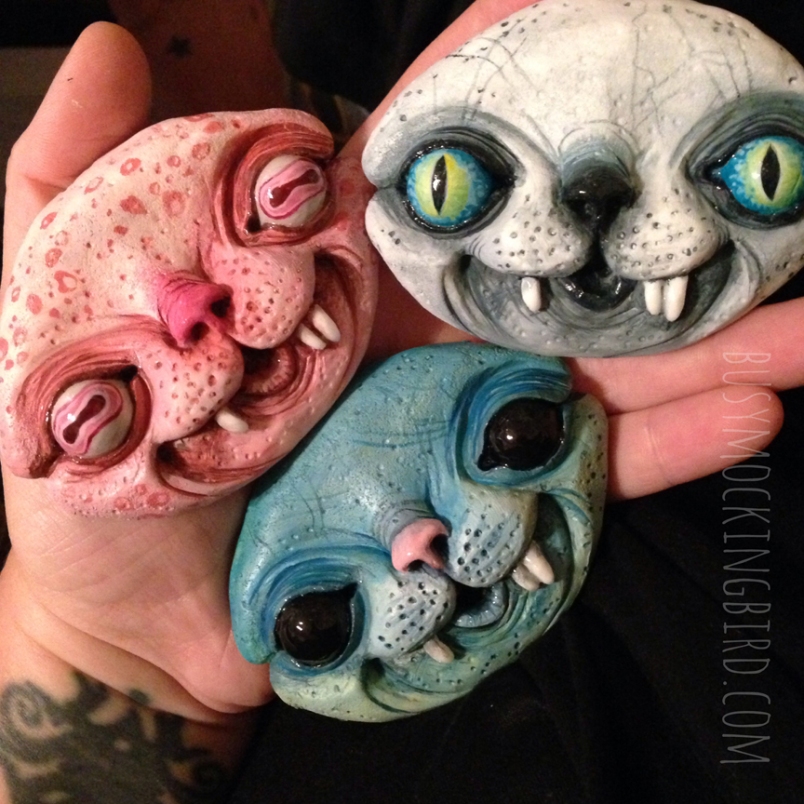 (Initially, I put resin on the mouth and eyes for a “wet” look, and only sealed the faces with varnish, but later ended up sealing the whole face in ModPodge Dimensional Magic for better wear & tear).

Aside from painting them, the most fun part was trying to figure out what sort of fabric to use.  So many options that completely change the look of each face!  And I just used scraps of things I had in my fabric bins, including fun fur, industrial felt, mismatched fabrics, and excess pieces of a patchwork quilt I once made.

I learned from talking to other artists (have I mentioned how much I love Instagram??) that the best way to affix the heads to the fabric is to use E600, and put them under a heavy object overnight.  Granted, they smell like chemical warfare afterwards, but if you let them air out awhile, the smell eventually goes away.

The first creature I made was a basic doll-shape:

Then I made a body for the one she painted herself:

I tried a more “pillow-like” one, with octopus-legs… 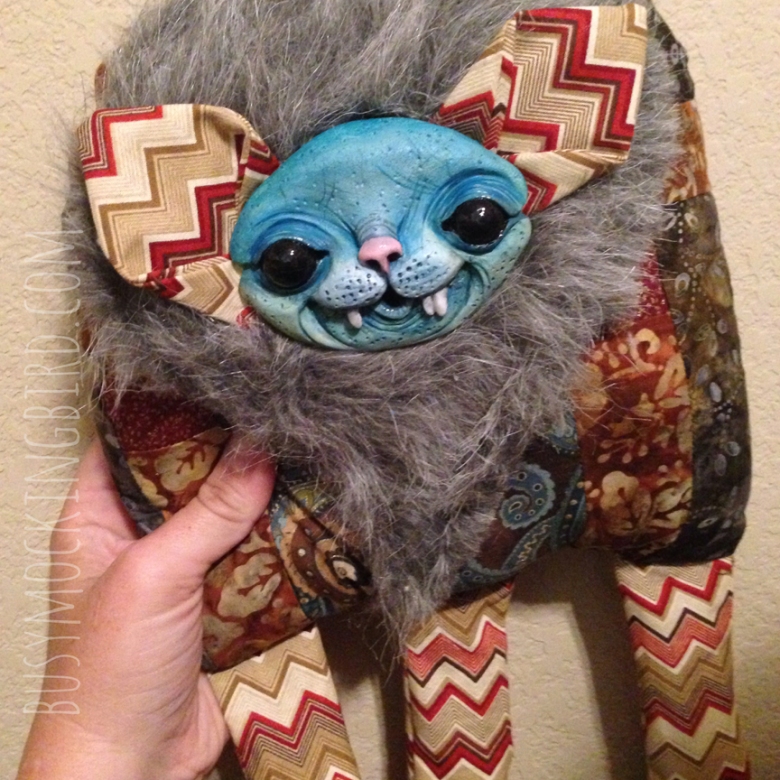 …And Myla wasn’t crazy about that one.  (Don’t worry–it’s found a good home at my friend Corrie’s house.)

I did what Myla describes as a flying fish-fairy: 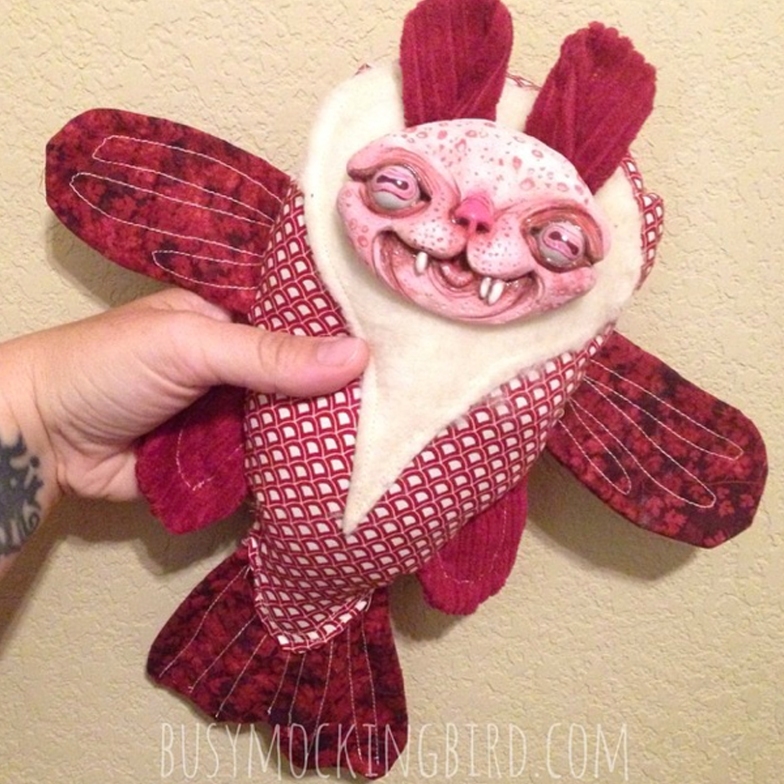 And a sort of dragonfly-dragon:

But by far, my favorite was when I tried something completely different, and made a more 3-dimensional body, with three little legs on each side. 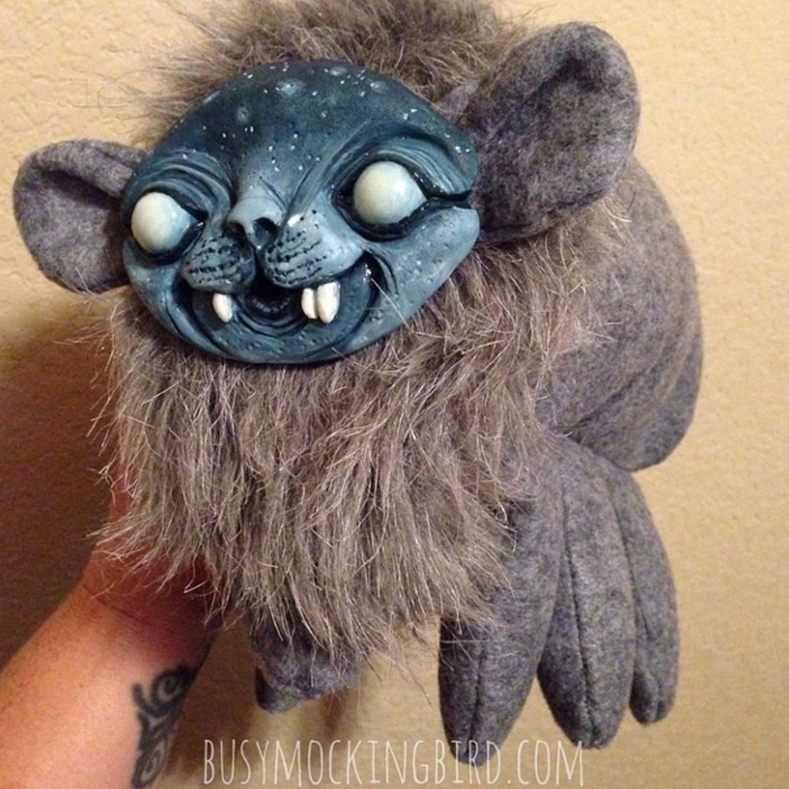 It was my first time making one that wasn’t just a flat front & back without using a pattern, so it’s a little wonky, but I quite like it.

Annnnnd, of course, Myla loved it.  She calls her “Midnight” and carries her everywhere lately. I realize these things are not necessarily made to be ‘toys” (how much they hold up to the wear & tear of kid life is still being determined), but she treats her dolls pretty well, so why not?

Thankfully, the horrendous glue smell has gone away.  And after repairing her chipped little resin face a couple of times, I think a good coat of the ModPodge stuff has really helped keep her shiny & new.

It’s a funny thing, though, when she takes her little monster places.  Other little girls will look at Myla and smile sweetly, and Myla will smile back…then they’ll look down at her fuzzy little monster, and their face will inevitably change to a mortified “what the HECK??”  When she takes Midnight anywhere, the comments she gets stem from either complete disgust, or absolute fascination.  And when people ask where she got such a doll, she says, with her sweet little 5-year old voice, “my mom sculpt it and cast it in wesin.”

Listen, I know we like weird things.  And I know most people won’t “get” the same things we’re into.  So we could teach her to either hide what she likes to be “normal,” or take it as an opportunity to share our weirdness with someone else.

We teach her that when someone doesn’t like something, or doesn’t “get” it (like maybe her references to characters she has heard stories of and loves, like Gamora and Groot, or Storm, or Star Wars), it might be because they just don’t UNDERSTAND it, or haven’t heard about them….but that it doesn’t make it wrong.  It might just mean that they don’t know, which would be a good chance to teach them something new.  People don’t always like the same things, but they shouldn’t try to make someone else feel bad for liking what they like.  And no matter what, you should never EVER feel bad or ashamed for liking what you like, no matter how weird, as long as you’re not hurting anyone else.  If they don’t like it, that’s okay–that’s their business.

So far, she’s done pretty well with that, thankfully. She doesn’t go out LOOKING for a conflict, but so far, she handles it with grace when she does.

On a side note, people have asked if I sell these, and so far, there are many reasons I haven’t.  I quite like doing them just for fun, and as much as I’d love to share them, the thought of doing them to order is quite intimidating!  (Not to mention, the effort that goes into sculpting, molding, casting, painting, and sewing might be worth a bit more than people are willing to consider.)

I have trouble with that–the thought of custom work and getting rid of the things I make.  It really is daunting.  I worry that it might lose it’s “fun” or its spontaneity. Also, I’m not sure how well they’ll hold up.  Maybe one day, when things aren’t so busy, and I’ve got this whole resin-casting thing down pat/ Maybe I’ll make a few and put them up in a shop as-is.    (I keep saying I’m going to do that….)

Until then, have any of you tried resin casting?  Have you tried making dolls from them?  I’d love to see your creations and hear from you about your resin-adventures!