When Myla was born, my mother and I wrapped her up in a little blanket to take a photo of her.  “Oh no.” I said.  “Delete that one.  It doesn’t look anything like her.”  We took photo after photo, again and again, and with each photo we took, a completely different little baby popped up on the screen.  Nothing on that little camera compared at ALL with the beautiful little creature in front of me.

I love drawing our daughter.  When she was younger it was very intimidating, and I was so awkward drawing her, because no matter what I did, it didn’t really LOOK like her.  It didn’t seem to capture that beautiful little person in front of me.  It’s one of the most intimidating things about painting portraits: trying to make the image capture the personality of its subject, especially when you don’t already know that person very well.  I comfort myself with the idea that (in my mind) it doesn’t HAVE to look exactly like them.  It’s supposed to be a representation of an aspect of their perceived personality.

So Myla has reached an age where she is slowly beginning to be self-aware of her appearance.  Not to the extent that some kids are….she cares nothing at all about clothes (you could put a space suit on her and she’d say, “oh, okay.” and rock that for the day.  On Kinder graduation photos she said “did you see they put a GENIE costume on me?” when referring to the cap & gown, which she didn’t even question–just rolled with it).  She doesn’t really care about how her hair is styled, other than in a functional way (to keep those curls out of her eyes). But from time to time, she has started to notice little things, like how everyone’s skin is different colors.  That some people “seem fancy” when she doesn’t really notice that sort of thing.  That people keep telling her she’s doing “boy things.”

If her girlhood is anything like mine was, I know the worst of it will come when she’s a teenager.  But I’m hoping to sort of help her enjoy and celebrate herself–whatever that means to her–now.  Not by constantly showering her with praises of beauty (although I think telling her she’s pretty is a good thing to hear, too), not by inflating her ego by making her feel superior, but by asking her what makes her FEEL happy and pretty, and trying to be comfortable with and rock whatever she’s got.

This will totally work, because my parents actually did the same things for me, and I NEVER had any image issues.  (INSERT SARCASTIC FACE HERE)   ….Okay, yes, I’m fully aware that no matter what I do, she’ll have issues.  But one can try, right?

So I drew this little Myla-face on a piece of pressed chipboard, and asked if she wanted to draw what she liked.  What made her happy.  What made her smile.  What made her feel like a good person.  How does she see herself?  And I let her use my acrylic paints to paint on it.
She painted pink hair, because she’s always wanted pink hair. We used paint-in temporary dye from time to time when she was younger, but they sort of frown at wonky hair color at her current school (which I find ridiculous).  She drew a streak of black (which sort of looks like a beret).  If anything, it was a fun opportunity to teach her a little more about using acrylic paints…

She asked if she could use a pen to draw the rest, and drew things that make her smile:  dragons, animals, made-up creatures, Lego characters.

So later, I finished painting the background for her.  I thought it was fun that instead of TELLING her what I thought of her, I got to see what she thinks, what she feels…how she sees herself.  Not to judge, but just to think about and be comfortable with. 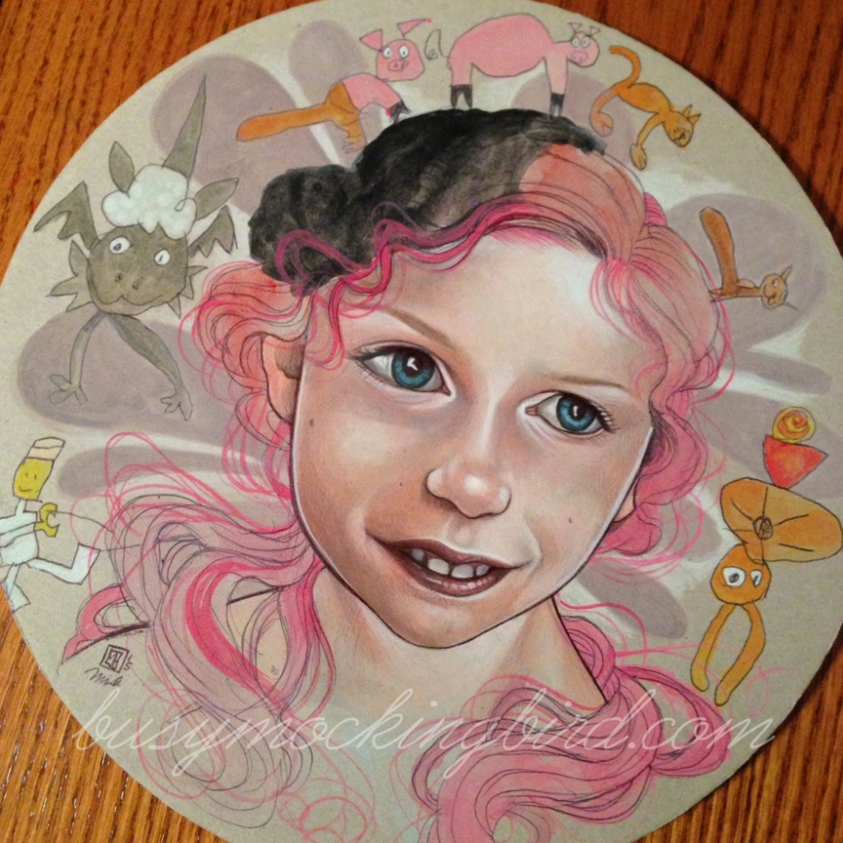 There are so many good examples for kids about how not being judged only for your outer appearance.  Some are:

And those are just a few that Myla (at age 6) and I have had pretty in-depth discussions about.  Not in some lecture, not by me bringing it up, but just in talking about what we just saw or read.

You can have fun with what you look like, you can change your hair and decorate it.  Your body can be bigger or smaller or shorter or taller than everyone else’s.  Your skin can be so many different colors.  You can have fancy clothes, or secondhand pants.

But what’s MOST important is being smart, being caring, being kind.

I hope she always sees herself the way I see her.