By busymockingbird on October 8, 2015

Before anything, I want to tell you all how very much I appreciate all the wonderful comments I got on my “Pause” post last week.  I was sincerely overwhelmed by all the support out there!  Each and every comment was like a splash of fresh water in the middle of a marathon.  It felt like smiles from new friends.  It felt like a hundred hugs through my computer.

People can be awesome, and there’s nothing more awesome than people being awesome to someone they don’t even really know.

So I thank you all so MUCH for that, with a promise to dust myself off, pick up our little pieces, gather them all around me, and keep on truckin’…

For me, when the going gets tough, the tough get….drawing.  And I have been drawing a lot.  I wish I was the type of person that obsessively worked out and got super buff in times of stress, but I’m not.  I’m quite squishy….because instead, I bury my head in sketchbooks, custom work, random doodles, and projects with the kid.

Remember those tiny sketchbooks I got a couple of weeks ago?  Well, I’ve already filled one completely.  And through the magic of the internet and magical blog-incantations (which I just spent some time trying to figure out), I can show you a little video of the sketches it’s filled with:

So I’ve been drawing a lot.  I’ve been working my regular job and taking care of my regular things, getting ready for a convention in Austin at the end of October, fulfilling custom portrait orders, and dealing with everyday things, and I fill every space in between with sketches.

So I thought that with my compulsive sketching surge, I’d join in on Inktober.  Have you heard of Inktober?  It’s basically just a drawing challenge…a drawing a day for the month of October.  I usually don’t commit to something like that with the sort of random hectic schedule I keep, but I thought that if I got Myla on board (she’s six years old now), it might be a fun thing to try to stick with and see it through…

Similar to Drawloween, Intober’s subject matter is wide open.  Some people have made posts with halloween-related topic suggestions (like “pumpkin,” “vampire,” “frankenstein,” etc), and some of my artist friends have made their own lists of subjects (BreakfastJones puts her own topic out every day if you want to follow along with her).

As for Myla and I, we sort of skip around.  Here’s a little show of the first few days of Inktober we’ve done so far…

Day 2:  Beetlejuice.  I drew Michael Keaton as Beetlejuice, wearing a shirt of Beetlejuice (from the Howard Stern Show), and Myla drew Beetlejuice with a snake-tail and bugs in his hands (she’s never seen the movie). 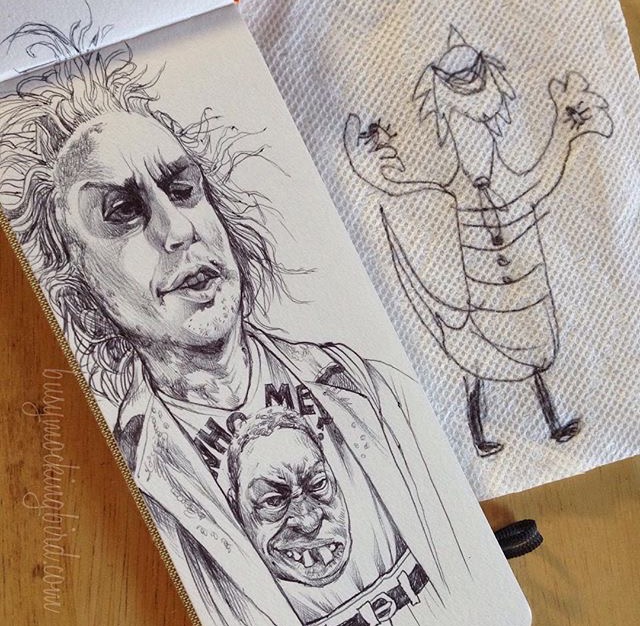 Day 3:  Witch.  I drew Bellatrix Lestrange, and Myla drew the witch from one of her favorite Playmobil shows, Super 4.

Day 4:  Skeleton.  For this one, I let her add on to a doodle I started, turning her into a people-version of LaMuerte from Book of Life, and Myla chose to draw Turbo from Wreck-It Ralph.

Day 5:  Werewolf.  I drew Michael J. Fox as Teen Wolf, and she drew Aisling (a white wolf-girl), from Secret of the Kells.

Day 6:  Edward Scissorhands.  From the minute she saw a photo of him somewhere, Myla thought he was just the super coolest.  She’s still too young to watch the movie (she’s pretty sensitive), but she gets the idea.

Day 7:  Wednesday Addams.  Since it was Wednesday, we HAD to draw a Wednesday!  Again, she didn’t know who she was, but Myla was digging the idea of a creepy family.

Day 8: Hellboy.  Another character she’s never seen in a movie, but loves the idea of.  A good guy who LOOKS bad?  How intriguing.  And he likes cats, too! 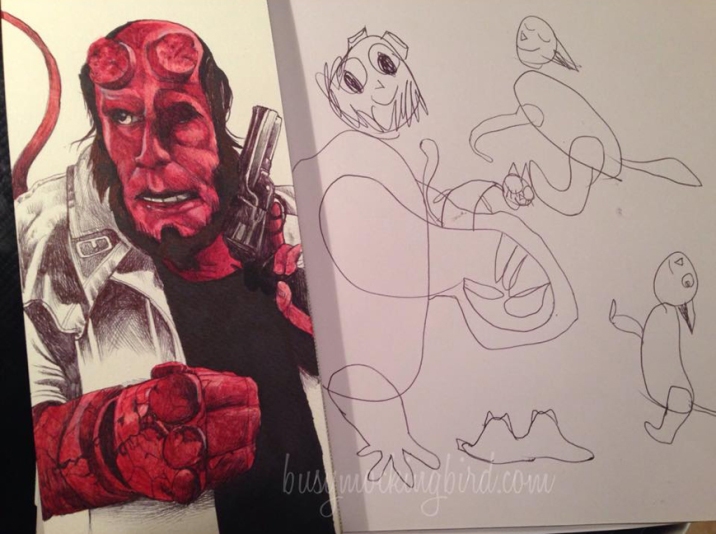 So there you go.  And there I still am, face-first in my sketchbook, getting through things the best way I can.  Just like you are.  Just like we all are.  And it’s so, so good to know we’re not all alone… 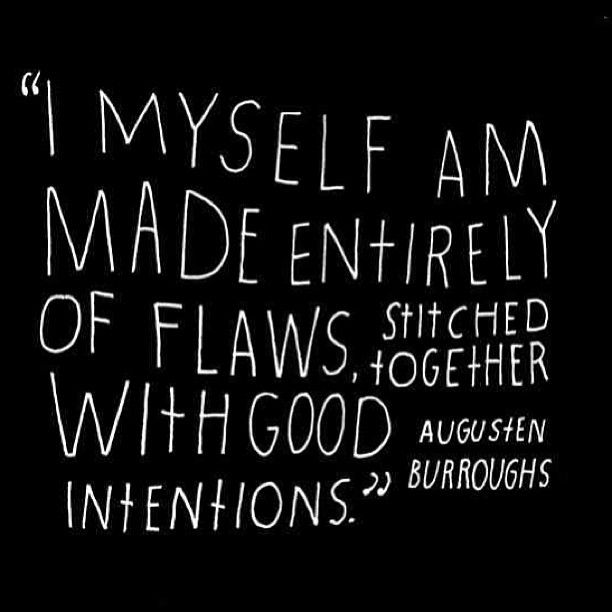 So thank you again.  Thank you.