This past week, the daughter and I visited family for Spring Break, part of which included an 8-hour drive.  Myla’s a great traveler, though, and can entertain herself for hours with a sketchbook, animation apps, or just staring out the window, daydreaming.  I had never tried her with audiobooks, but since the trip was long and she was tired of her normal car activities, I decided to play for her The Wonderful Wizard of Oz, read by Anne Hathaway.

Anne has a knack for creating interesting voices for all the characters, which Myla enjoyed, and to my surprise, she was riveted, and was hooked right away.

We happily learned that there were a great many differences between the book and the famous movie (of which she’s not really a fan), and was full of so many strange creatures and events that we had never heard of before.

“We should try to DRAW all the characters the way we saw them in our heads!” she excitedly suggested once we got back and settled in at home.  It was an incredibly awesome idea (she is 6 years old, and never ceases to have awesome ideas).  And it just so happened that my husband (who is deployed) had sent us a little sketchbook that was just waiting to be drawn in… 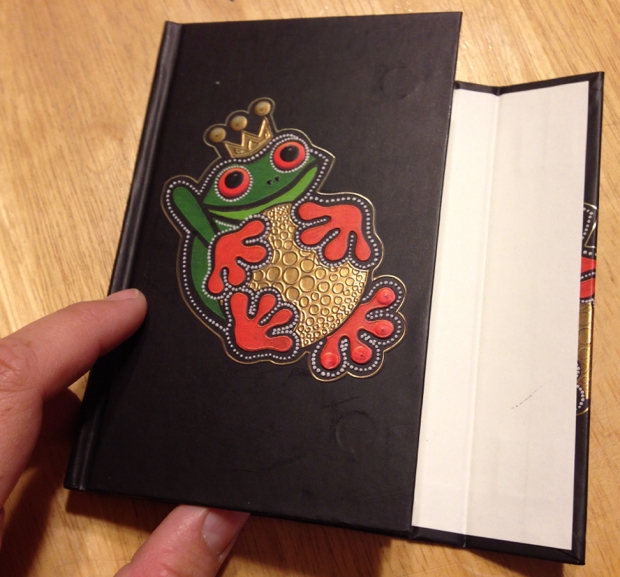 So we started talking to each other about the characters, and we talked about drawing what was in our minds as we heard the story.  We talked about how the author can sort of tell you what they see, but everyone who hears it might have their own picture in their heads.  (We also never referenced the movie or the original illustrations from the 1900s, we just drew what we saw in our heads, so that can’t be wrong, no matter how you slice it).  So in case you’re worried about spoilers from a book that’s been out since the 1900s, I’m going to tell you a bit now about all the characters we drew:

One of her favorites was near the end, when the adventurers come upon some people they called the Hammer-Heads, who had no arms, but very wrinkly necks, which could shoot out and punch you with their flat heads.  And we started to sketch.

We drew them side by side, to compare.  I pictured them more as rock people, and she saw them more like little cranky men.  In any case, they both definitely had a wicked case of cranky-face.

Next up, we drew the Scarecrow–Myla’s favorite of the travelers.  I drew a little doodle on her lunch napkin that day, and when she got home, she sketched her version of the scarecrow being flung by the guard trees in one of the forests.  I drew the Scarecrow in a quite disturbing description of how Oz gave him brains–by filling his head up with a lumpy mixture containing pins, which then stuck out of the fabric once his head was back on.  They said it made his mind “sharp” (and not at all terrifyingly creepy in the slightest, right?).

We both loved the Tin Woodsman (my favorite), whose story was MUCH more grim than in the movie.  In the book, he was a regular man, in love with a Munchkin girl who lived with a mean witch, who enchanted his axe, which made him accidentally keep cutting off his own goshdarn limbs.  Luckily, his good buddy the Tinsmith would replace his limbs with tin ones each time, until finally the Tin Woodsman cut off his own head and body with the enchanted axe, and the Tinsmith fashioned him a new one…but it didn’t have a heart, and he no longer was able to feel love, even for the little Munchkin girl….until Oz cut a little square in his chest and put a tiny fabric heart inside, and he finally felt love again.  I drew him on her lunch napkin, and then later, holding his axe (with which he chops a GREAT many messy things in the story) and Myla drew him feeling sad, crying over accidentally stepping on an insect.

The Lion seemed to us just like a regular lion, and we talked about how in the movie they kind of made him like a person, standing on two legs.  Hers was a little more goofy -faced than mine (since he was quite silly), and mine is drinking the liquid courage (which I assume was probably a shot of whiskey or whatever?) that Oz gave him.

Dorothy was also quite different.  Myla saw her as a little blonde-haired girl in a blue dress, and we were both surprised to know that in the book, those famous ruby slippers were not in fact “ruby,” but were SILVER, a-thankyouverymuch, and never ever contained a bit of red.  When the house lands and she’s about to take off on her adventure to find the Wizard who might help her get home (which she heard about from a woman who was NOT Glinda, but an older small, hunched wrinkly woman, who was indeed a Good Witch), she puts on a blue gingham dress, the silver shoes, and a yellow bonnet, which I supposed she wears for the entire trip…  Since that blew my mind, I scrapped my childhood image of the iconic Dorothy, and drew her with shorter, curlier brown hair.  Myla and I both saw Toto pretty much the same, which makes sense, since they described him pretty well. 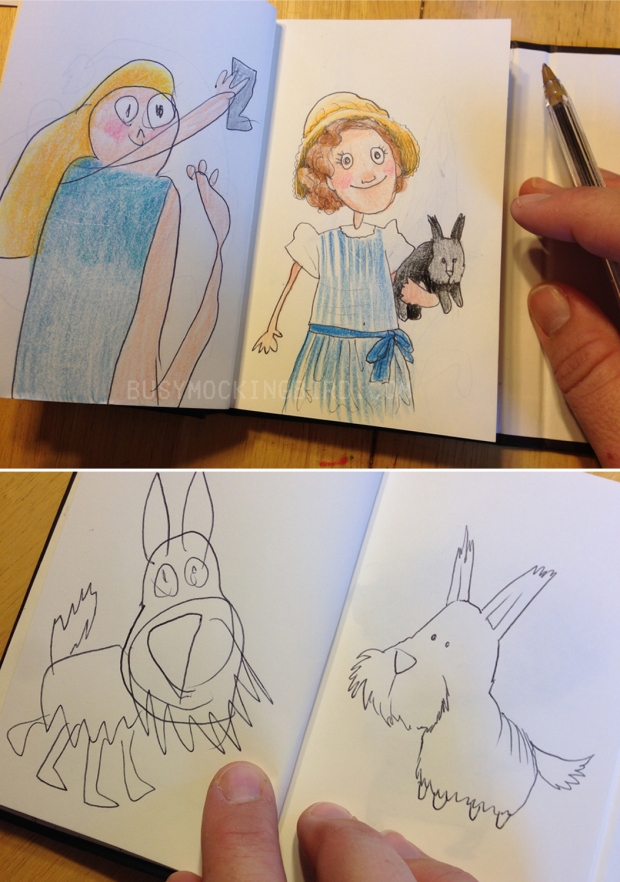 The Wicked Witch of the West was a fun one, as she was described in the book as having one eye that was magic and could see everything in the land she ruled over.  “What did she have in the place where her other eye was?”  Myla asked me.  “Well, they never really said if she lost one of her eyes, or if it was one eye like a cylclops.”  So we decided to both draw her as a grumpy ol’ cyclops.  And they never actually said her skin was green, so I just drew her with a greenish tint.  (Still, I think it might’ve been fun to draw her like a sort of cyborg, or like Mad-Eye Moody from Harry Potter.)  🙂

We haven’t yet drawn my favorite characters, the Flying Monkeys…but I was surprised that their story was MUCH different in the movie, where the Witch just bossed them around all the time, whenever she wanted.  In the book, there is a golden jeweled cap that the Witch puts on, says a goofy little chant, and the monkeys come do whatever she commands.  The catch is that the wearer of the cap can only call the monkeys three times (she’s already called them twice), and then the hat must be passed on to someone else.  So when the Wicked Witch sees the travelers in her country, she sends…the WOLVES to go hunt them down.  When that doesn’t work, she calls the CROWS.  Then the BEES.  Then the WINKIES. (wait, what?  “Where are the goshdarned monkeys??” I was thinking at the time).  Finally, when all of those are defeated, she decides to use her last and final monkey-call to attack them.

The monkeys have a whole other back story, but it’s a bit long…

…So there it is!  What started as a simple way to pass the time on a long road trip turned out to be a pretty fun project for us both.  I’m pretty happy about how much she got into it!

I had nearly forgotten that when I was in high school, I had an AP English assignment to do a paper on imagery from the book One Flew Over the Cuckoo’s Nest, and I drew each character as I had seen them in the descriptions I read.  It had always been one of my favorite assignments, and I had nearly forgotten about it until Myla came up with this one.

We’ve read a few actual chapter books at bedtime, like the Spiderwick Chronicles (of course), Charlie and the Chocolate Factory, Fantastic Mr. Fox, James and the Giant Peach, How to Train Your Dragon,  and The Phantom Tollbooth, to name a few–ALL of which would probably be amazing for this project.  I think the key is finding out if your kid’s into it first.

But if not, hey–what’s to stop you from giving it a try yourself? 🙂