Wands at the Ready!

We’re in California visiting family, and we took a side detour to HARRY POTTER WORLD in Hollywood!  (Yes, I realize it’s in Universal Studios and that there are OTHER things to see, but primarily, Potter World is our FAVORITE place on earth…)

Last December, we used some savings during a particularly rough time, and took a quick trip to Harry Potter World in Florida….But, as it was a rough time, we decided we needed a do-over.   So our family trip to Universal Hollywood during a family trip is MUCH appreciated.

We already have wands from our last trip, but I remembered how Myla dropped hers and broke it (they were kind enough to repair it for free), so before we left, I thought it would be fun to make us some keychain wand holsters to carry our wands this time, like REAL wizards (the husband, incidentally, opted out for some reason, so the kid and I were the only mega-rad cool guys there.  I know I was, with my giant sun hat to avoid sunlight at all cost).

There are some VERY cool wand holsters on etsy (yes, I said “very cool” and “wand holsters” in the same sentence, what?), but I wanted to try building my own wonky version myself.

First, I took some pleather-looking fabric I had, cut out a fairly small rectangle, and hemmed it over on three sides.  Then, I wrapped it around Myla’s wand to gauge how tight it’d need to be to hold it in there firmly, and yet still make it easy to pull out.  You know–should any wizard-situations arise.

Next, I took a thin strip, folded both sides to the center, and then folded it over and sewed it.  This would become my keychain loop, which I slipped a keychain ring through, folded over, and stitched to the inside of the rectangle.

(Ultimately, I decided the d-ring wasn’t working, and the chain was too clunky and hung too low, so I removed it altogether, and replaced it with two keychain hoops, but in the photo above, I hadn’t figured that out yet…)

Once the loop was in place, I folded the rectangle over the wand again, and hand-stitched it together.  (It’s quite wonky, but I am a sucker for that wonky-Weasley look, so I’ll just pretend that was the look I was going for all along…)   I added a few charms I had–Myla loves Aragog, so I added a little spider and a tiny potions bottle. 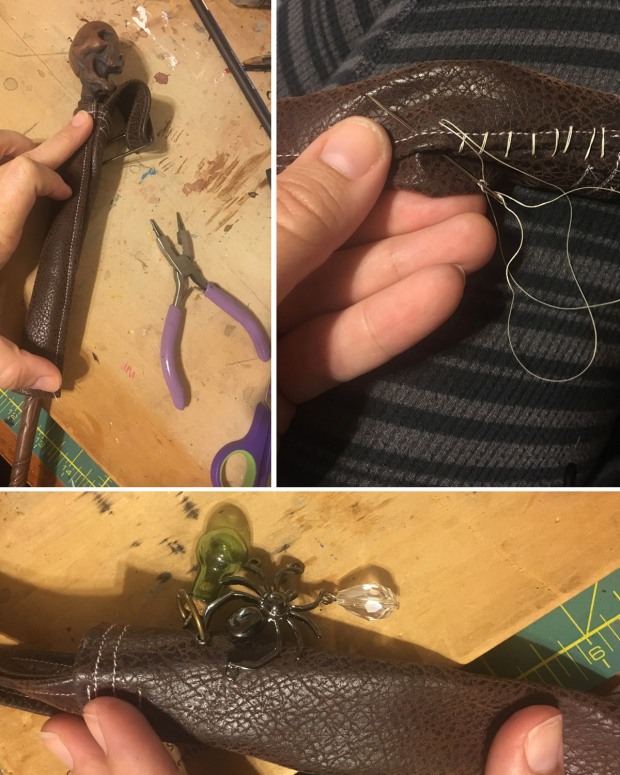 I had initially thought I’d hang them from the bottom, but I didn’t want it to be too clunky and annoying.

And here it is:  our keychain wand-holster!

As you can see, the chain is basically useless, since it hung the wand too low, but putting a keychain hoop directly through the loop band and connecting it to her beltloop (like in the photos above) hung it at just the right level.   I eventually removed the chain and attached TWO keychain hoops, just to be sure it didn’t fall off or anything. 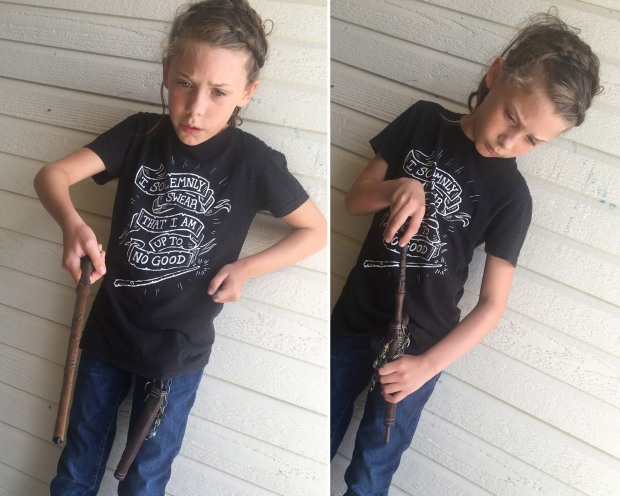 So there you go!  Wands at the ready!  EXPELLIARMUS!!!  …Okay, now put that thing away, kid.  You’ll shoot your eye out. 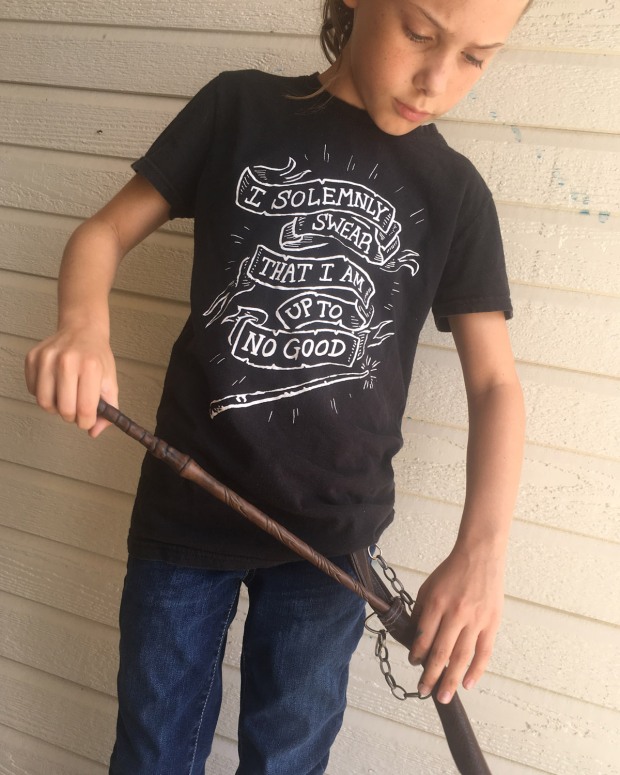 So here are Myla’s wand holster and mine, side by side.  Mine has a couple of bug charms (because bugs are awesome), and my cicada is holding a little tiny potions bottle.

Since my wand (on the right) is basically straight, I had to curve mine a lot more, like an ice cream cone, and sew it all crooked.  But I don’t mind–it held up pretty well.  You can see the two keychain hoops on these without the chain, too. 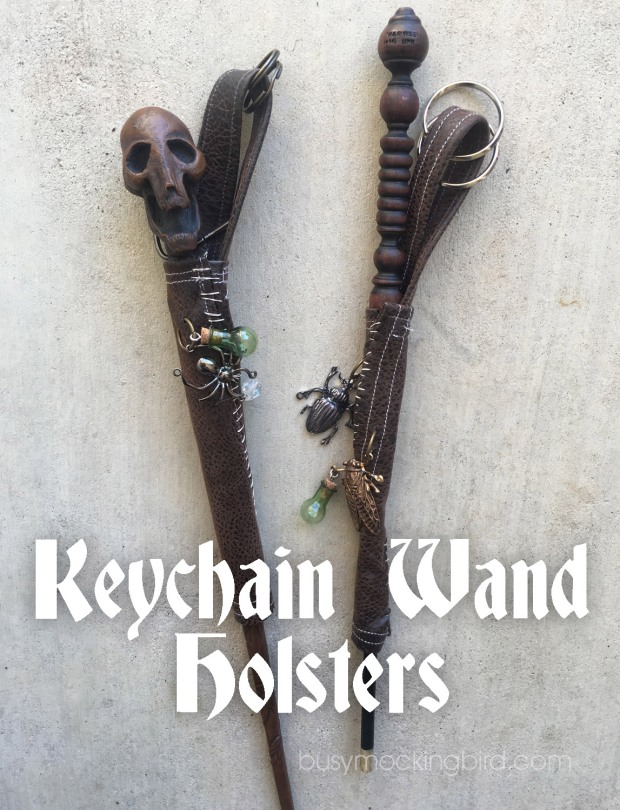 And there you go!  Ready for the Wizarding World of Harry Potter.

Muggles, step aside–we’ve got some wizarding to do!