Sometimes (as I’ve mentioned more than once), you have these weird ideas that you don’t really understand, but for some reason, you just have to do.  My little mermaid was one of those ideas.

It’s rare, I thought to myself, to see a mermaid that isn’t some lithe, dainty, graceful creature.  And while I’m not super into the details of anatomy, I know enough to realize that most mermaids aren’t portrayed with visible gills.  And I bet they ALL don’t have gorgeous singing voices, either.  🙂

And that was my goal:  a beautiful, strong, healthy, and FISHY-looking mermaid covered in gills near her face and chest and lungs.    So I built a wire structure, wrapped it in tape, and built up my Super Sculpey figure on top of that (this keeps you from using so much clay, as well as from burning the outside while all that inside bulk tries to cook).  I learned from friends that are sculptors, to use rubbing alcohol to smooth out some areas, as well as a heat gun to soft-set some areas while you work on others—so you’re not constantly squishing the face as you sculpt other areas.

I put lots of decorative “fins” around her chest and face, to sort of shield the gill areas.  I thought nature (because nature is smart) would most likely find ways to protect the softer skin on a mer-creature with scaly sort of decorative things (because nature’s an artist, too).

She has webbed hands, and fins on her arms (to be more aero/aquadynamic, I suppose?).  I used the inside pieces from a broken ballpoint to add texture onto the scaled part of her tail, along with two lower fins.

Oh yeah, and I also burned her nose with the heat gun….because it was my first time using a heat gun.

It didn’t matter all TOO much, though, since after it was cooked and cooled (I like to turn the oven on 250, put my sculpture in, and turn the oven off & forget it til it cools off), the next step was to paint her.

I didn’t want her to look too morose and gothy, but again–thinking of nature, she’d probably want to be fairly well-camouflaged, right?  So I painted her in sort of blueish grayish purples. 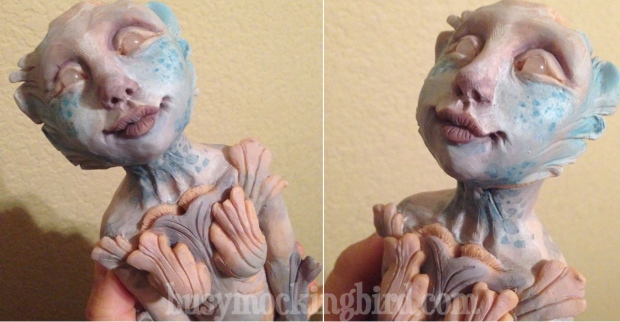 My favorite parts were the gills:  I made them sort of reddish, as I recall fish-gills being.  And do you see she’s got some curve and a booty?  I’m just going for a version I’ve never seen before.  That curve is pretty hard to photograph.  I at least gave her a little pudge under her arms, because maybe she’s buff and well-fed.  And hey…we can’t ALL be as dainty as Ariel. 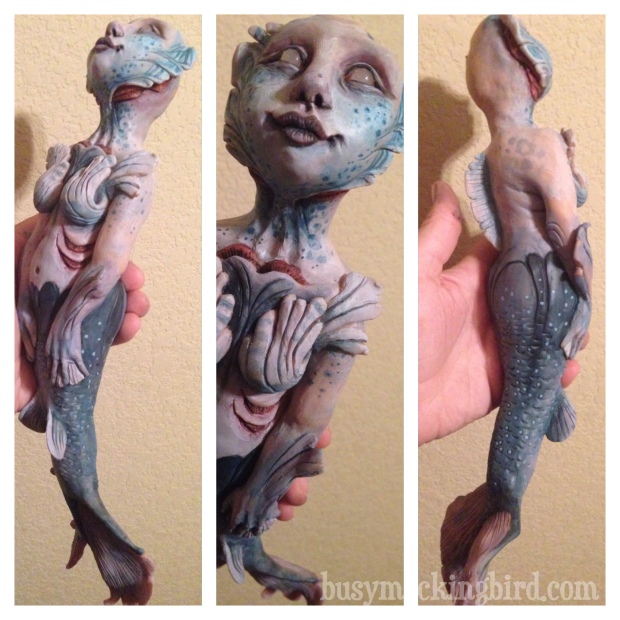 So at the point when I could go no further, and Her Baldness was staring at me with peaceful patience, I was saved by an order I had made online of a small batch of reddish mohair.  I am not at all familiar with laying hair, but I had read a little bit about dolls and laying their hair.  Still I wasn’t sure what to do.

So I faked it.  I squirted black E-6000 on top of her head, and carefully laid her hair the way I wanted it, and waited for it to dry. (I have since been told that there are many MANY better ways of doing this….but I am impatient.) 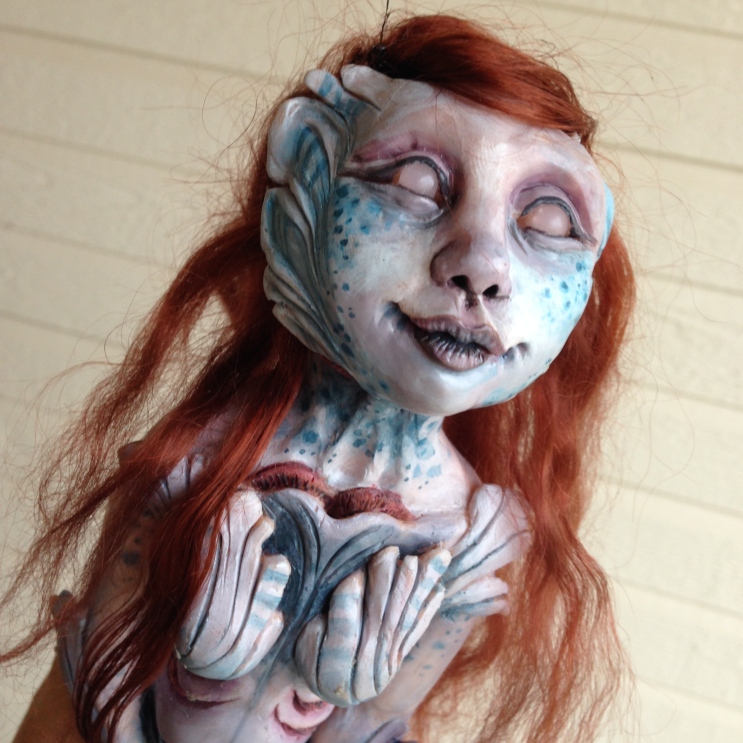 So now what?  What do you DO with a creature like this?  I had initially wanted to mold her and cast her in resin to customize in eighty million different ways.  But I’m over my experience level with 2-part detailed molds, so I just stuck with making the original as awesome as I could while I could.

So I made my own mount for her. 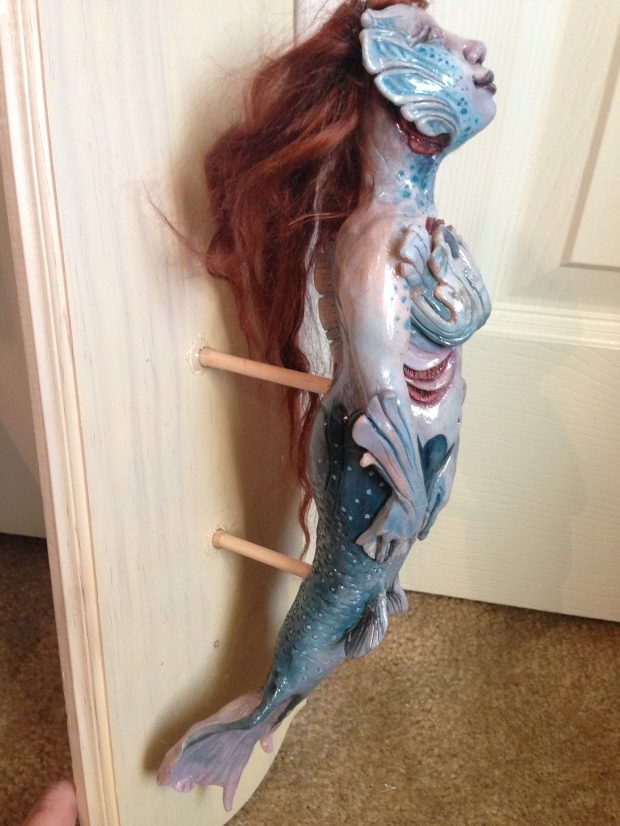 But is she hanging on my wall?   No.  Not yet.  I’m afraid she’ll fall off those poles.  I keep meaning to paint the board (which I should have done beforehand, but it’s too late now).  So she sits on my shelf, flat on her back, on top of two poles.  And I’m still scared she’s gonna fall, so I haven’t hung her up yet.  I was careful to make sure she didn’t look like a mounted, dead fish, as I also didn’t want to freak out our 5-year old.

So there’s something unfinished.  I love her, I’m just not sure yet what to DO with her.  But in the meantime, I thought I’d share!  Sometimes, the weird things end up pretty wonderful.