The other day, I was in a crafty mood, and felt like doing a project with Myla.  I pushed all my “to do” things and other commitments I’ve been putting off, and asked her if she wanted to make a doll.

She ALWAYS wants to make a doll.  “There’s a creature I’ve been thinking about,” she said excitedly.  “I think it would make a great doll!”  She grabbed her markers and started drawing it out.

When I do projects like this, I like to let her feel like she’s a big part of making it.  We went to the craft room, and picked out some fabric from my stash.  Apparently, this creature is a sort of cat-like mossy dragon, so we found some mossy-looking fabric that fit perfectly.  I let her decide what fabric would work best.  She gave me details on how it should look–long tail, webbed feet, spiky hair…

I sat her on my lap and had her help a little with the beginning.  She’s still a little needle-shy, but I showed her how to guide the fabric without pushing it.  After awhile, it’s easier to finish it up myself, so she bounced off to another paper project while I finished up the sewing.

Later, when the body was done, I asked her to draw the eyes on with a pen the way she wanted, so I could paint them.

And finally, the little mossy cat-dragon was done!  I’m no master sewer by any means, and my dolls are ALWAYS quite wonky, but the best part is that she doesn’t care, because we made it together and she designed it herself.

I always ask her what she thinks when it’s done, and she always says she loves them so much.  Once, she said “when we make dolls, it doesn’t always turn out exactly like I thought in my drawing….but it always turns out so much BETTER.”

I noticed she uses dolls as an icebreaker with other kids at the child care room at the gym, and sort of walks up to kids and just starts playing dolls with them.  Sure, they ask what the heck it is, but when she tells them, I think they sort of dig it.  I brought it to visit her at school lunch the other day, and made it move around like a puppet and play, and had the kids (who had at first looked at me like I was odd…which I am, btw) cracking up and laughing at the silly antics of her little mossy doll. 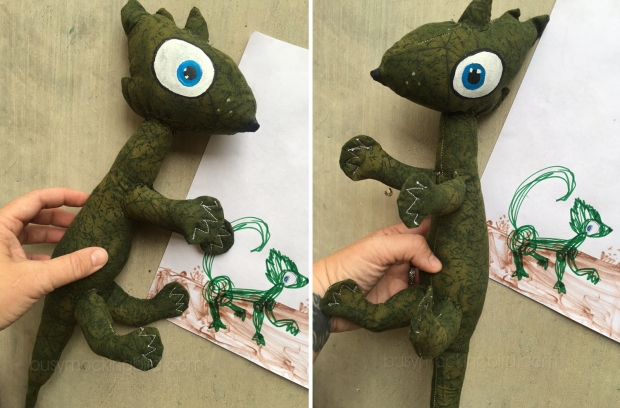 So wonky or not, it took me about an hour and a half to make something that she could make connections with.  In just a short amount of time, we made something she could proudly tell people she designed…and that little feeling of pride glows on her face when she talks to other kids.  Which makes ME smile.  And that’s what it’s all about, isn’t it?