By busymockingbird on February 3, 2017

Yes, that’s a word I just made up:  Dumblebroidery.

I swear I’m not strictly a Harry Potter blog, so I apologize if Potter’s not your thing….but I can’t say I haven’t been reignited in my love for all things wizarding by our trip to the Wizarding World of Harry Potter mid-December, as well as by the fact that I’m rereading all of the books from scratch by listening to them on Audible, so I can “read” while I craft.

Between the beetles I love to paint, the Stuff Myla Says, the Dream Creepers, and the other random doodles I do, I sometimes like to try my hand at embroidery.

I’ve done several hand- and machine-stitched portraits on paper, but “real” embroidery has often eluded me.  I have been known to lack a great deal of patience, and swear under my breath a lot when my threads get tangled.  But (as I frequently do), I still had a sudden urge to embroider a Dumbledore one day last week, and immediately set to work.

Thankfully, as I have dabbled in nearly every craft imaginable, I had some embroidery tools on hand from a forgotten project long ago.

First, I gathered some photos of Dumbledore from online.  Although I was working mainly from movie Dumbledore #2 (Michael Gambon), I also wanted to include a hint of Dumbledore # 1 (Richard Harris), as well as the descriptions of the professor from the books.

I started with some plain muslin I had lying around, and did a very rough sketch with pen (I hear they make disappearing ink pens for such tasks, but I didn’t have one at the time, so I just did my thang), and started stitching with the threads I had.

Some people have described it as “painting with thread,” which seems fairly accurate, as I went about shading it as I would a sketched portrait.

One of my favorite things is to embellish with beads and metal jumpers, so I had a lot of fun adding those details to his beard as soon as I possibly could.

It soon became apparent that I didn’t have enough variations of colored thread to contour his face, so after a quick trip to the craft store, I was able to get a wider variety for shading and highlights.

I wasn’t going for realism, but a more illustrated approach.  I wanted him to have lots of hands, one of them holding the Elder Wand, with some beads to accentuate the gnarled wood bumps in his wand.

I’m no pro with embroidery by any means, but whenever I start working with a new medium, I like to research it a little.  People tell me this is called “crewel” thread?  Just the simple thread from any old embroidery store (are their fancier threads?  I’m sure there must be, and now I’m curious…), and each is made up of 6 threads, so I split them in half by hand (another process which causes some occasional swearing), and used 3 thread strands at a time.

A good tool to have on hand has been a laminated embroidery card with directions for a few basic fun stitches, which I found in the embroidery section of WalMart ages ago.  So aside from a few basic stitches, I tried to pay attention to the direction of the thread to accentuate whatever part I was working on (like trying to keep the lines in his collar going in one direction to avoid attracting attention from elsewhere).

People reminded me about his half-moon glasses, which are mentioned in the book SEVERAL times when describing him (although Albus #2 rarely seemed to wear them in the movie).  So I got a little metallic thread, and added his spectacles.

The “magic” above was a simple chain stitch, with a few clear and metal beads sewn in.  Next was finishing his beard, and working on the second set of hands… 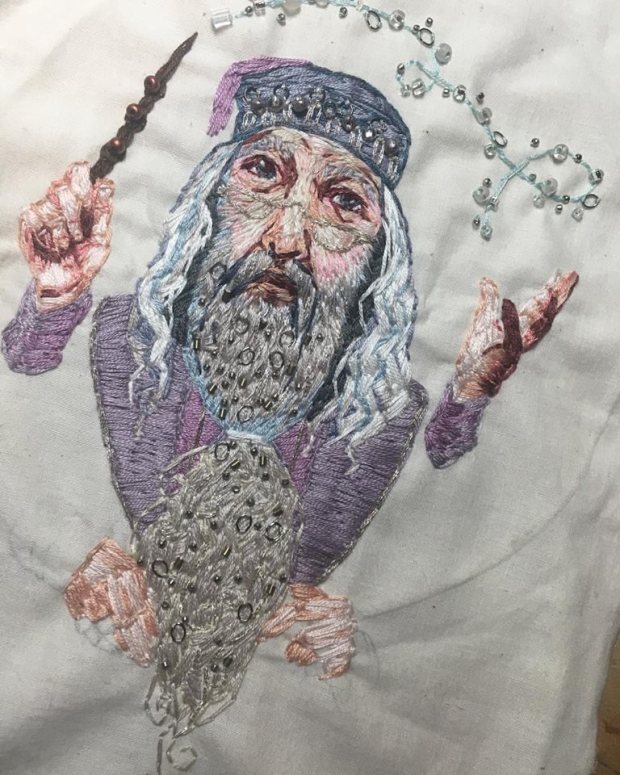 And finally, the finished Dumbledore!  I’m still not sure I like the hands floating randomly like that (I may paint a background, or add some more “magic” lines around them).  I think it’d work really well in a drawing, but in an embroidery piece, it doesn’t translate as well…

I wasn’t quite sure what to do with him next, though, and I got several great suggestions online, such as making a pillow, displaying him in an embroidery hoop, and turning him into a patch.  But then someone suggested an embellished frame, and another posted a link to this:

…which I promptly picked up on Etsy for around $20 and it’s sized just perfectly for him.  Woohoo!  Another reader–a former framer–suggested pinning the piece to foam core before mounting it, and another suggested sculpting additions to the frame, BOTH of which I’m going to try, and you can be sure I’ll post it when I do!

For now, since Dumbledore’s done, I’ve started my next one:  Luna Lovegood, which I plan on placing by our entryway, along with the phrase, “Weirdos Welcome.”  I have a Snape in the works (in my mind), and even a Newt Scamander (from Fantastic Beasts and Where to Find Them) with his case.  Maybe I’ll get to them all before running out of steam.  For now, I’ll keep doing them for as long as they’re fun.  I can’t wait! 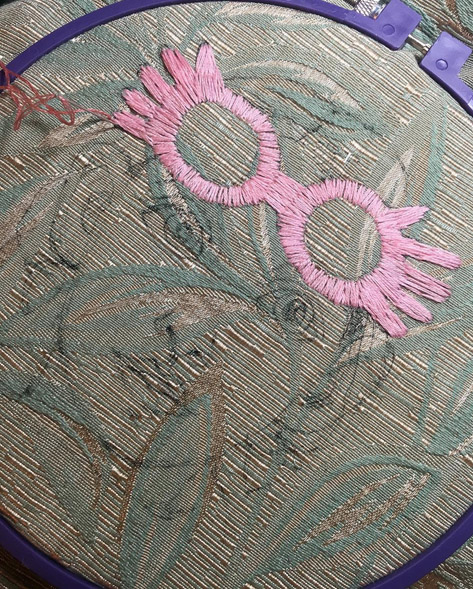 Happy 11th birthday to my awesomely funny, sweetly sensitive but tough creative kid, @mylamockingbird ! We take a birthday photo every year on a carousel but this year I had to make one myself♥️ (also she styled herself for this photo, in a @pink.owlet shirt and an old Audrey 2 headband I made)