By busymockingbird on December 1, 2017

I had to say goodbye to my sweet dog this week, and my heart is broken.  It’ll get better in time, but it hurts a lot right now.  I won’t flood you with every detail of my dog’s life, but I wanted to share the process of my memory bracelet, and how I made a mold of Adie’s snooter. 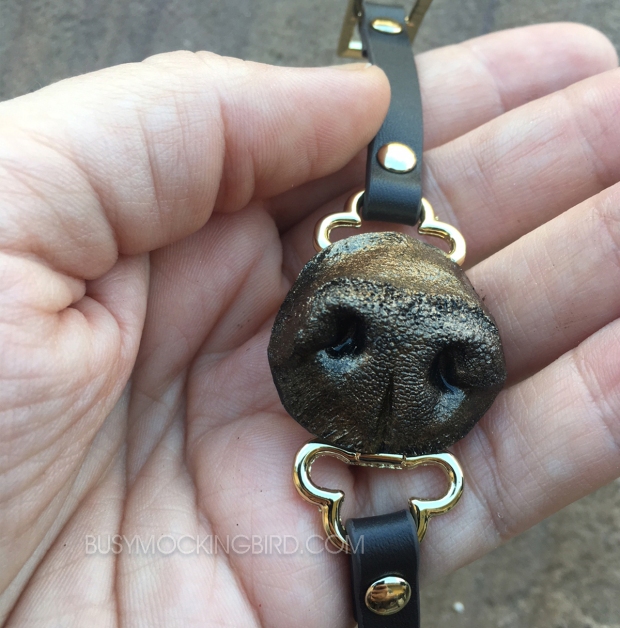 Adie was 11 years old and had been sick for awhile, and battled both cancer and seizures.  And while medication was helping, I didn’t realize my remaining time with her would be as short as it was.  In the very end, I held her face and kissed her snooter, but she had had so many seizures that her little body couldn’t handle it.  She was already gone before they told me she was gone.

Adie (named “Awesome Dude” after a line from an SNL skit–A.D. for short) was my baby before I had a baby.  She was pretty sure SHE was my baby, too…. 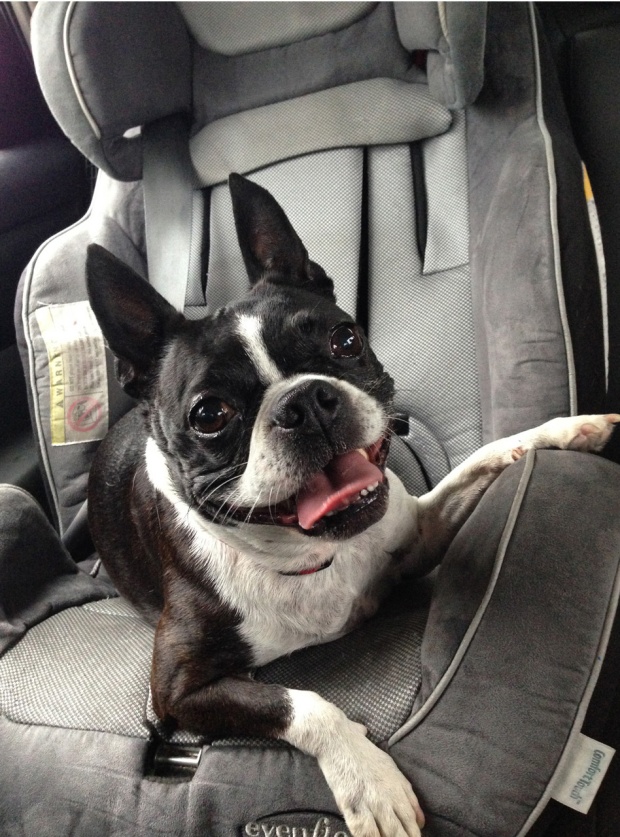 She was a tiny thing when we first got her, only 2 pounds (and rescued from what I’m pretty sure was a puppy mill), and we brought her home with worms and ear mites, and made her good as new.  She grew up around our gentle boxer, Scout, who was so sweet and careful with her, that Adie lived her life assuming she was as BIG as her. 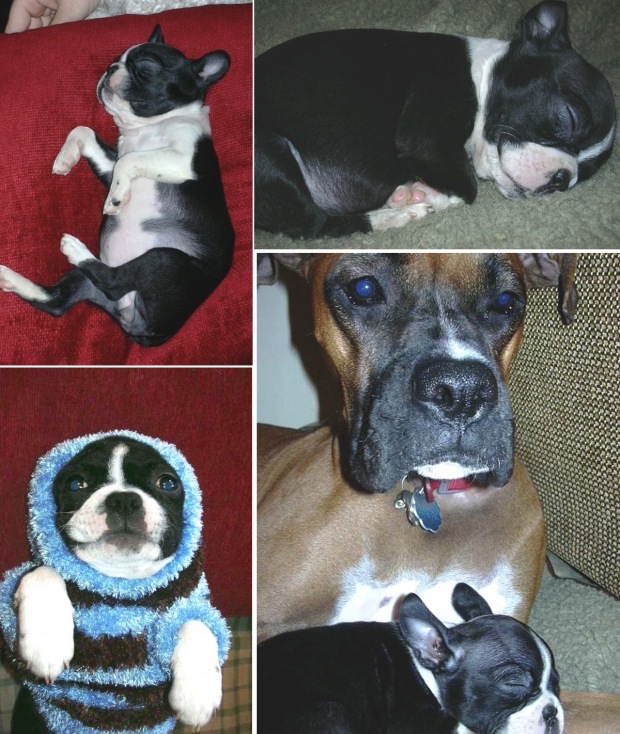 She licked my face constantly, because I loved her doggy-kisses.  She followed me EVERYWHERE.  She cuddled with me CONSTANTLY.  She had to sit by me ALWAYS.  And she could clear a room with her toots. 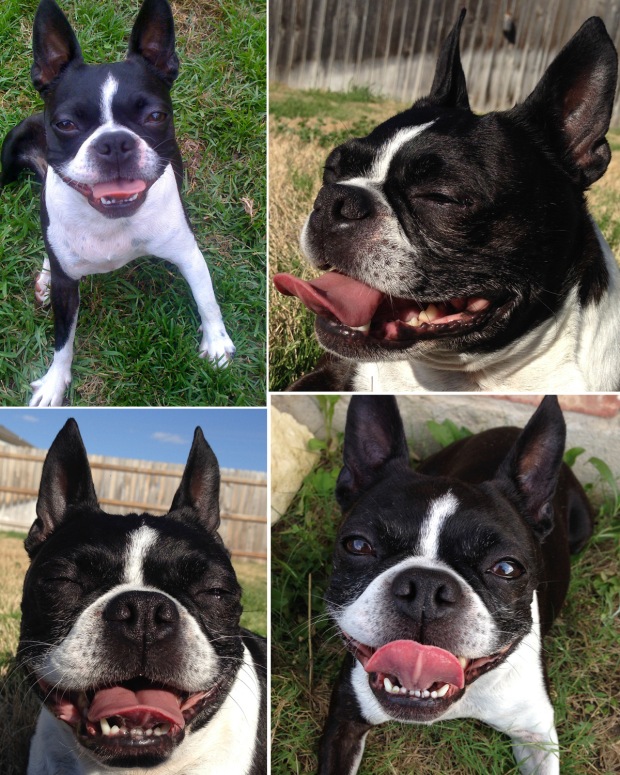 She loved me, and I loved her, and she made me smile.  She was a food-junkie, and constantly sniffed our floors looking for any possible scraps of food…which left her inevitably with some random scraps of paper or dirt stuck to her nose.  Family would laugh when I’d post a picture with the simple caption–over and over and over again through the years:  “Adie, you’ve got something on your snooter.” 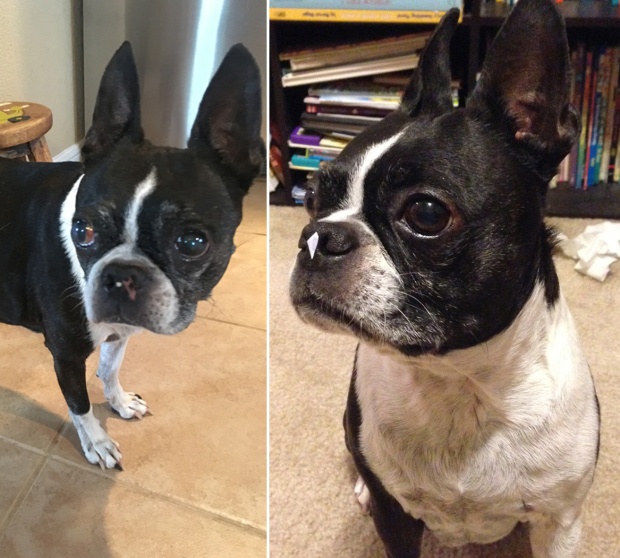 I had the feeling she was getting pretty bad.  We made an appointment to talk to the vet, hopefully about upping her medicine to help with the seizures.  I started thinking of the worst, and what sort of thing I’d want to remember her by.

She didn’t wear her collar at home, so I didn’t have an emotional attachment to it.  I’ve seen art made from whiskers or toenails, but that just didn’t seem like my thing.  What I was going to miss most of all was kissing her little snooter.

I looked around the internet, and found that there are artists on Etsy that would send you a moldmaking kit, you’d send it back to them with an impression of your dog’s nose, and they’d make a lovely piece of metal jewelry.  It’s a beautiful thing, but I wondered, since I have worked with moldmaking and resin, if that would be something I could do myself.  I didn’t find much online, so I thought I’d walk you through the process I had of making my own, for those of you who wanted to give it a whirl, or–like me and Adie–whose time was short.

1.  First off, I got this Amazing brand mold putty at our local craft store.  It’s a nontoxic 2-part quick-curing mold formula.  As you can see in the top right of the box, it comes in two tubs.  You pinch equal parts of each, and squoosh them together in a ball and mix it until it doesn’t have any streaks in it.  You have to work fairly quickly, as it starts setting once it’s completely mixed. 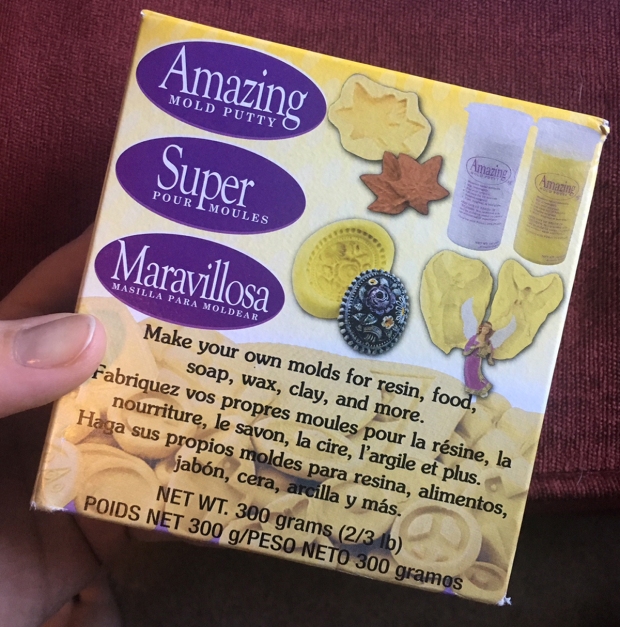 2.  Next, I held Adie gently, and quickly pressed the ball up against her nose, making sure to keep her mouth open to breathe.  She was tired and lethargic anyway, and didn’t seem to mind much.  She just kind of let me hold it there for awhile, and if you press gently (not completely squooshing), you should be able to pull away after awhile with a decent nose print.

3.  So here’s a picture of the nose print (minus a few shedded hairs–don’t worry, it didn’t hurt her at ALL and she’s shed WAY more than that in a day–but maybe be more careful if your dog has long hairs).  Next up, I set the mold carefully in a messy container (because I knew it would be messy) and poured my resin mix in it, waiting for it to cure (the kind I got takes around 10 minutes). 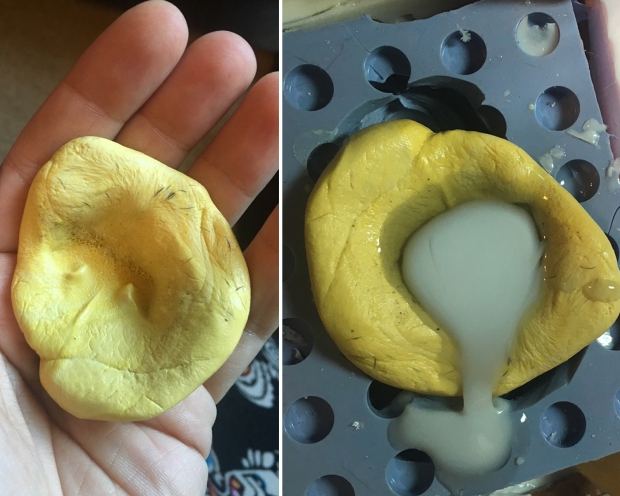 4.  And here’s the little resin cast of Adie’s lovely little snooter.  I used my little hand-held dremel sander and shaped the edges into a smooth sort of oval. 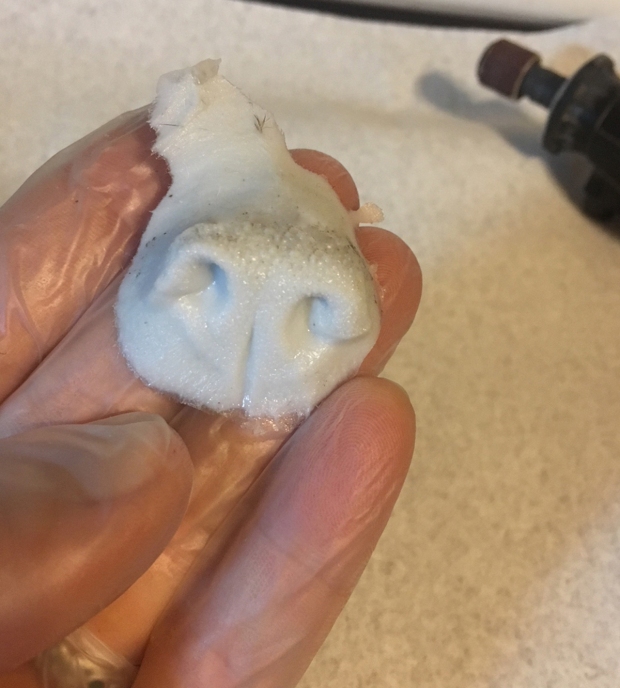 5.   Next up, I painted it solid black.  I didn’t want it to be realistic or anything; this is just an undercoat of acrylic paint, in preparation for the next step. 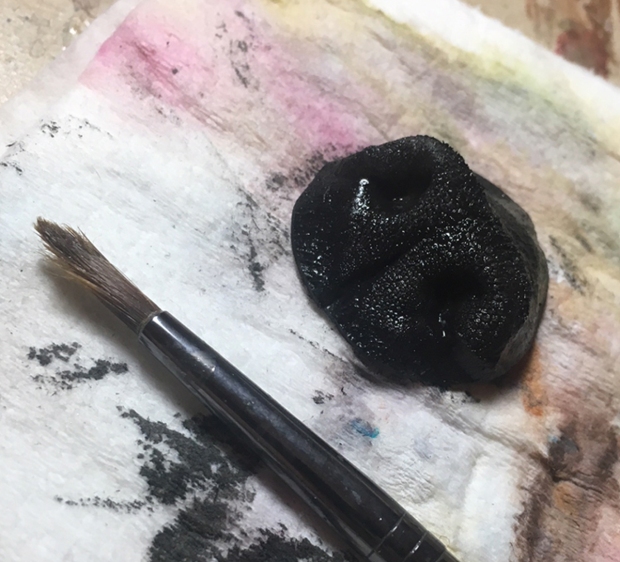 6.  I found this water-based Metallic Lustre by DecoArt in “Iced Espresso” to match the wrist bracelet setting I had found at the craft store, and painted it over the black. 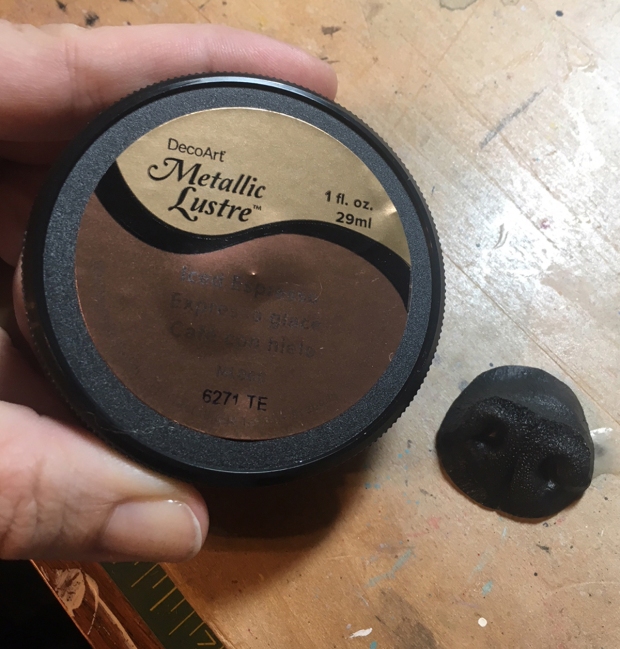 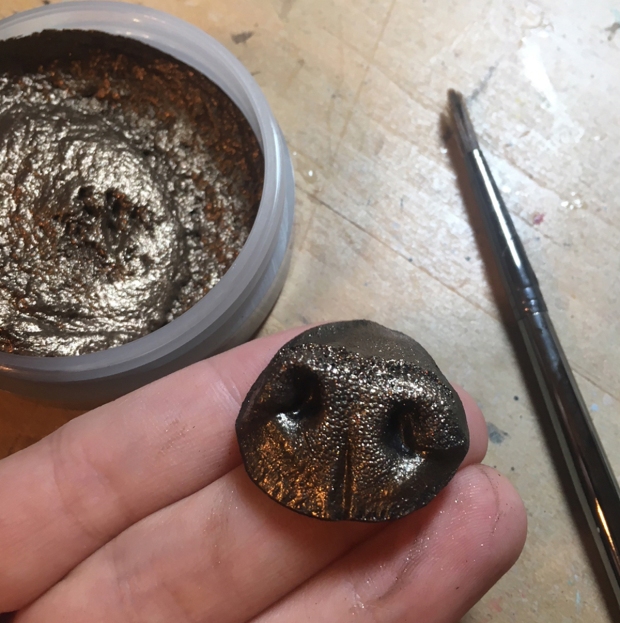 8.  Here is the blank bracelet base I found at the craft store.  There are several options you can choose…this one is a leather adjustable band with a flat panel to glue things on.  I knew I didn’t really want a necklace–I felt like it’d be comforting and easier to give her snooter a kiss if I wanted to, to have it on a bracelet. 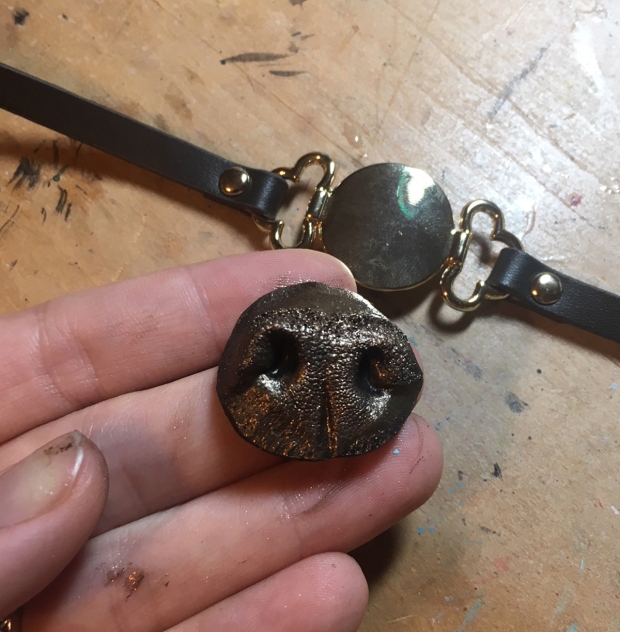 It’s glued on with E6000, and I later went back and sealed it in clear resin, to avoid scratching it up (which is what happened the first day I wore it, even though it had been sealed with clear varnish). 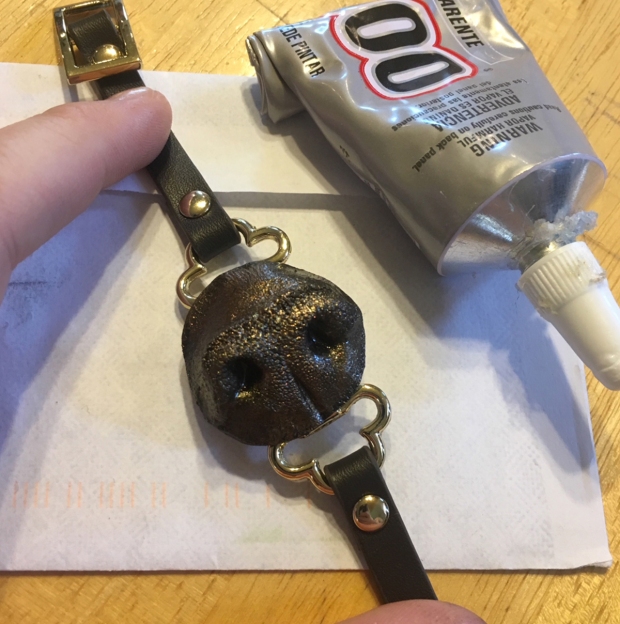 And there it is.  And two days later, she was gone.  And I miss her so much, but I’m so glad I had a chance to do this. 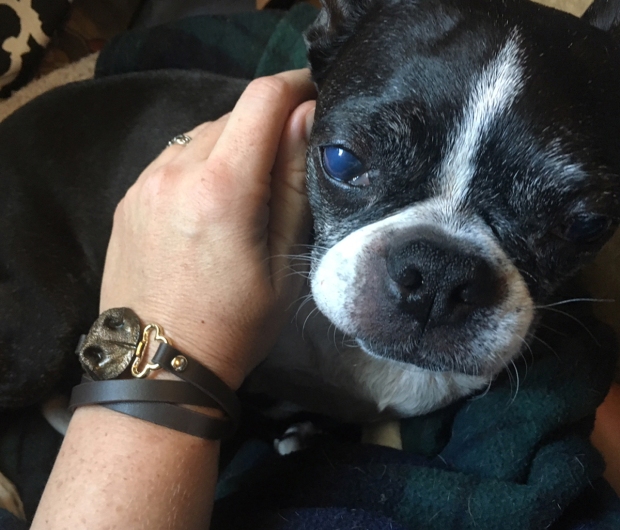 Whatever people need to do to grieve, as long as they’re not hurting anyone else, it’s okay.  There’s no “right” way to remember a loved one.  For me, having a mold of her little kissable nose around isn’t nearly as good as her real nose, but it helps the hurt a little.

Myla handled it well.  We cried a lot about it.  She asked if I could make her a bracelet too.  (The next day, a kid at school asked if she cut her dogs’s nose off….because kids can be insensitive jerks sometimes.) 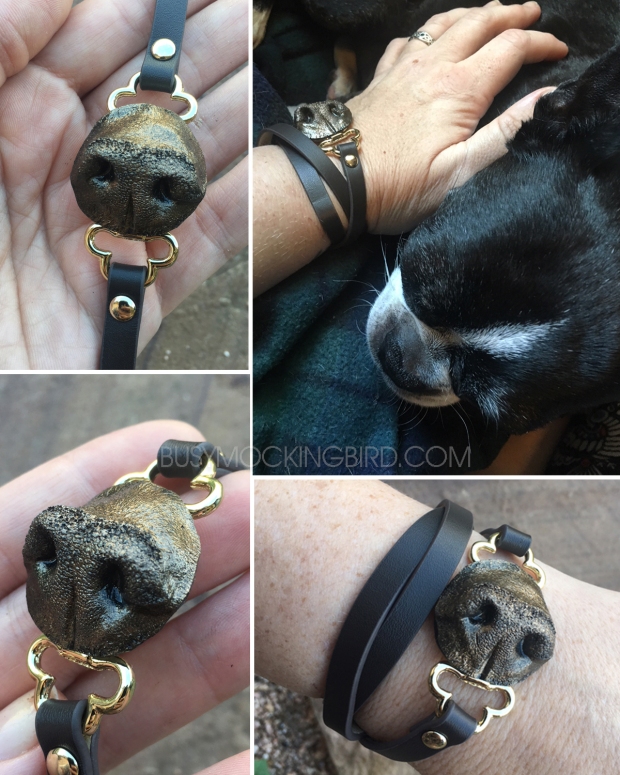 So there you go.  I miss my sweet Adie.  I miss the spot by my bed where she slept.  I keep looking down and forgetting she’s not there.  It’s weird feeding only one dog instead of two, and the boxer isn’t NEARLY as excited about food as Adie was.  It’s strange sitting on the couch and not having her snuggled up against my side.

I miss kissing her little face. 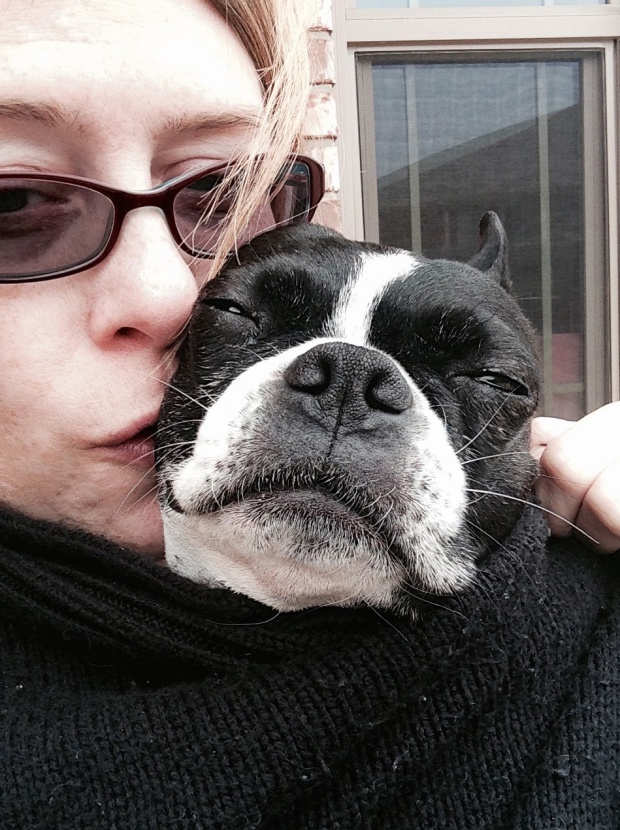 I got so many kind words over on Instagram about losing my sweet Adie.  She made people giggle in the IG Story posts I made of her whining while she was waiting for dinner (two hours early).  And many people asked me about the process of making the bracelet.

It’s not the same as having her back, but hopefully, if you’ve got a hairy baby, you can make a nose mold too, and have a snooter around to kiss goodbye.