By busymockingbird on February 7, 2014

I’ll be honest with you, here.  Shhhhhhh—-lean in a little bit; I’ll whisper it to you:   ….I don’t really like Valentine’s day.

Not even a little bit.  Maybe it’s because I was always the “new kid” who was a bit weird, so on V-day the fancy little box we made in class only ever had a scant card or two in it.  Maybe it was because as I got older, the flowers & candy seemed to be not simply a sweet sentiment shared between two people, but a rating and judging system that primarily existed ONLY for the sake of some of the snotty girls to announce to us lesser creatures that, “someone likes me THIS much, and now I am royalty.”

Okay, I admit it:  the years have made me a little bitter.  If there was a humbug for Valentine’s Day, I’d be the poster girl.  I can’t help it–I blame the unrealistic expectations of 80s movies and fairy tales.  Even now, after 12 years of marriage, I PREFER IT if my husband doesn’t do anything more than say, “Happy Valentine’s Day, babe!”

But having a kid, you start to see the silly holidays in a different light, for what they are probably MEANT to be, and right now, she’s at a stage where they’re just an opportunity to get some candy and give out fun cards.  And that’s cool.  I’m pretty alright with that.

So when our daughter’s Pre-K class had a Valentine’s party last year,  I looked around at some of the kid’s cards out there.  Some of the sentiments in the pre-made cards always seemed a little too “lovey-dovey” for my tastes.  I mean, they’re in PRE-K!  I’m not trying to marry the girl off just yet!  I’ve not ever been a big fan of many of the pre-made character cards, and while I realize she will probably insist on choosing some obnoxious character cards later down the road, right now she doesn’t really care WHAT they say as long as candy is involved…..so for now, I get to call the shots.  Yay!

So I decided to make my OWN cards for her!   I didn’t want to make them TOO pessimistic (I mean my gut idea was “Valentines Day SUCKS” with suckers on them, but OKAY okay–I guess I admit that’s a little harsh for a kid’s class), so since she likes monsters, I just made these… 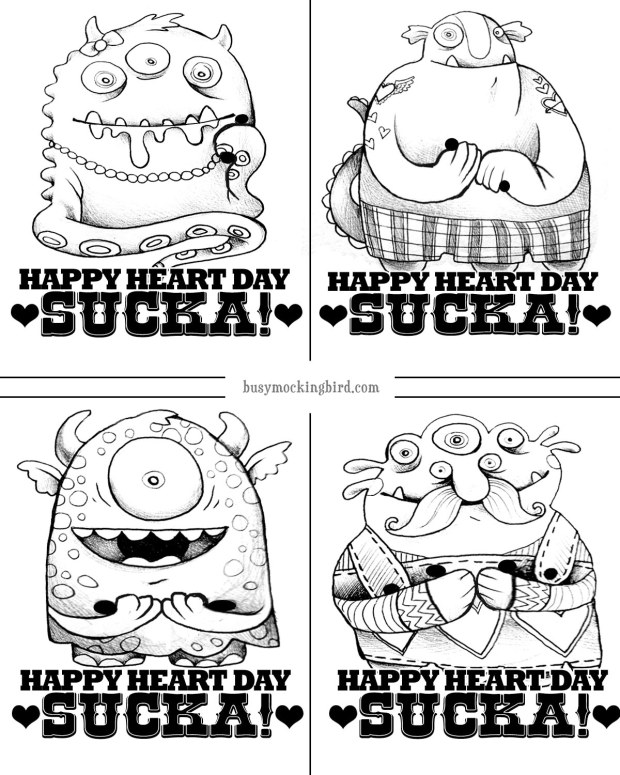 And you can use ’em too, if you want to!  They’re easy and don’t take much work.  Just right click the image and save it to your desktop.  Print it out on cardstock, and punch holes where the black dots are, and slip a lollipop stick in.  I even cut around each one a little, just for something different, but you can just cut straight on the black lines to keep it easy peasy.

And I don’t really think they’re THAT bad, are they?  I softened it up with the “Love, Myla” part.  Shoot, Pre-K kids can’t read anyway, but they know lollipops taste good, AMIRIGHT???

This year, with the overwhelming amount of candy I’m sure she’ll get, I thought we could be the ones that send the “different” ones, ones with little toys or something in ’em.  I found some pre-made ones with little rubbery bugs (which our daughter loves), and I decided to keep the homemade theme going for as long as I can get away with it… Maybe “You Don’t Really Bug Me So Much.”  Is that too long for a card?  Heh-heh.

Being artsy fartsy comes in handy sometimes!  My college friend James Stowe knows that firsthand–each year, his son & daughter request themed V-day cards, and he creates them himself.  A few years back, he made the CUTEST Star Wars cards that were all OVER the internet.  He’s done Dr. Who Villains and Mario Brothers, D&D and now Firefly and he’s offering those over on his website as a printable PDF for only $3 apiece!

So if you’re a humbug about Valentine’s Day (or even if you’re not), feel free to print my sucka sheets out for yourself.  Or get some from an artist like Stowe.  Or come up with your OWN!  I may not like Valentine’s day, but I’d LOVE to see what you do!