How to Draw for Real

Most of the time, our 6-year old is very happy with her art style.  She draws as well as builds 3D sculpture creature things out of paper and tape.  But the other day, she said, “I want to draw for REAL.  Can you teach me?”  I assumed she meant drawing realistically, since that’s what I was doing at the time she asked.  “Can you show me step by step?” she asked.  And so I did.

We started with the basics:  simple football eyes, two comma shapes for the nostrils, and the bow of the top lip, the line of the mouth, and the curve of the bottom lip.

She added her own flairs, as she always does (like vampire teeth and a “knight’s helmet”), and then she stood back and took a look.

I explained to her that it was a VERY good start, and better than a lot of people can do as an adult, but the details would come with time and with practice.  The good news is, if you enjoy it, it doesn’t seem like hard work at all.

Anyone who draws will tell you that people often want to know the type of tool they use, the type of paper, the name brand of everything, they want to see a timelapse, they want detailed instructions on HOW you did it.  Aside from general interest as an artist, I can tell you that stuff is NOT NEARLY as important as practice. 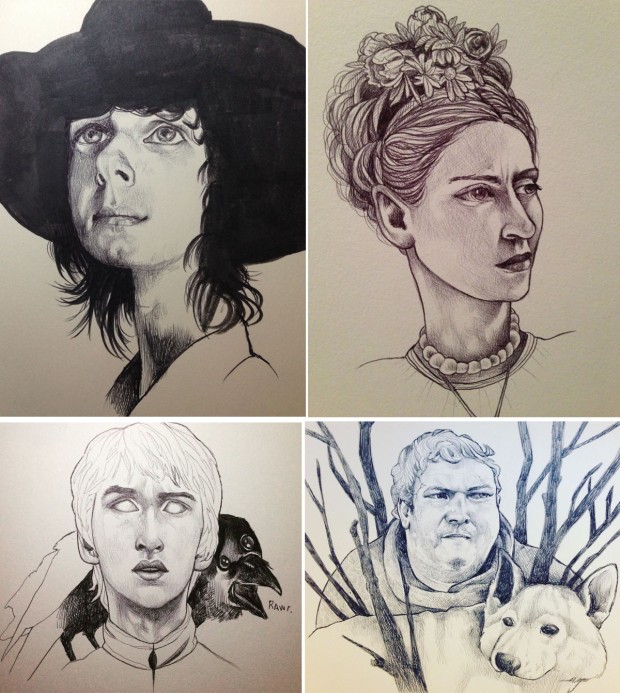 It sounds easy, doesn’t it?  It takes time.  Lots and lots of time.  But if it’s something you enjoy doing, you’ll do it for the love of it, and the more you do it, the better you’ll get.

When you’re just starting as a kid, I think it’s perfectly okay to learn by copying a piece by another artist.  Or copying a face from a magazine.  Or by using the style of one of your favorite artists to make something of your own.  As long as you don’t tell everyone it was YOUR original idea, it can be a good way to learn from people whose work you admire.  From there, you can create your own work, your own drawings, and your own style.

And once you REALLY learn the basics, and really understand them well, you can unlearn them and create your own style!  People ask me why the people I draw are so wonky-looking (I assume they mean that respectfully–haha!).  They assume the variation in proportion is a choice I intentionally make while I draw.  Like, “okay, now I’m going to make this eye bigger…”  Actually, when I was in college, I took countless classes on proportion, and facial structure.  We studied live models, and had to measure out the proportions of the face and body correctly.  For me, there is something pleasant in perfected proportion, but once I learned it, I found I had much more fun when I just drew things as I saw them.

I often start with an eye, and then sort of guess-measure where everything goes from there, based on a reference photo I’m looking at.  And because I’m not a computer, my proportions wind up a bit…askew.  And I’ve learned that I enjoy that!  It’s not an intentional distortion, it’s just me, and what happens when I don’t walk directly down the center of the road.  And I enjoy it!

I’m often impressed at the technical perfection of people who can draw hyperrealism (where it looks EXACTLY like a photograph), but that style doesn’t sing to me nearly as much as wonky imperfection does.